Arrieta follows the heart to find a protein function

When Adrian Arrieta started undergraduate studies in molecular toxicology at the University of California, Berkeley, he anticipated a career in drug development and pharmacology. However, a comparison of normal and cancerous human karyotypes in a genetics class sparked his interest in molecular mechanisms of disease. 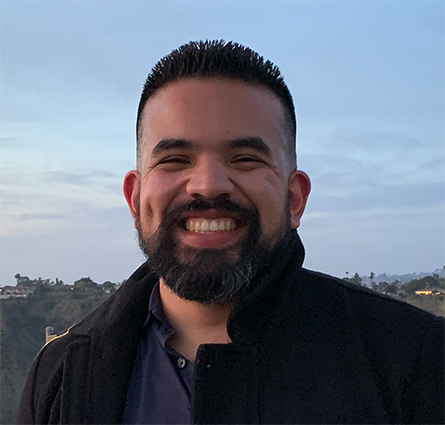 Arrieta joined Christopher Glembotski's lab at San Diego State University for his doctoral research, working on the premise that a tumor microenvironment has a high degree of protein misfolding and shares characteristics with a heart undergoing ischemia. Upregulated genes in cancer cells might provide a clue to which proteins in the heart respond protectively to stress.

Arrieta and his team's research was published in the Journal of Biological Chemistry. A collaborative environment was key to his success, he said; the lab had to develop new assays and techniques. "We really had to start from the ground up," he said. "Everyone in the author block did something to make this happen."

Arrieta is now a postdoc at the David Geffen School of Medicine at UCLA in Thomas Vondriska's lab. Arrieta met Vondriska during a talk on Arrieta's paper at a conference on cardiac regulatory mechanisms. The two were intrigued by each other's research, and Arrieta is now investigating protein quality control in the context of chromatin dynamics in the heart.

He's excited to be back in LA, where he grew up, because he can be with his family and enjoy home-cooked meals. "My mother told me that when I was little, I told her I was going to work at UCLA," he said. "Now, here I am — full circle."

Finding the function of an ER-resident chaperone in the heart

After cardiac ischemia, reperfusion injury can occur when blood returns to the tissue. Ischemia/reperfusion, or I/R, disrupts protein folding and post-translational modification in the endoplasmic reticulum, causing loss of protein function and activating the ER stress response.

Mesencephalic astrocyte-derived neurotrophic factor, or MANF, is part of a gene program regulated by an ER stress response transcription factor. For more than a decade, researchers knew that MANF was upregulated in models of heart disease but didn't know its exact function. MANF bears no structural similarity to other ER proteins, and this got Adrian Arrieta wondering. "If it doesn't look like anything else that's been studied in the heart or any other tissue, it must be doing something really unique," he said. "That was the draw."

Arrieta and his colleagues in the Glembotski lab at San Diego State did experiments spanning techniques and specialties to deduce MANF function. They developed a knockdown mouse model to study MANF in both cells and mouse hearts. Lack of MANF expression in the heart increases cardiac damage during I/R injury, they found, and restoring MANF expression can reverse those effects. MANF also improved ER proteostasis during reperfusion injury.

The team found that MANF acts in response to reductive, not oxidative, stress during reperfusion injury and isolated its function as an ER-resident chaperone. Finally, by generating and studying a mutant version of the protein, Arrieta determined that conserved cysteine residues in the MANF molecule are required for its chaperone function. MANF's lack of structural homology remains a question for future research.