ASBMB Today Science Mirror, mirror on the wall, which organs age fastest of them all?
Wellness

If you could look into a crystal ball and see your medical future, would you? Michael Snyder argues that you should — and that you actually can.

Snyder and his research team have shown that we each have a unique health baseline and that deviations from this baseline precede symptomatic manifestations of diseases and aging. His lab and several companies he has spun off his research are at the frontier of personalized medicine and clinically relevant molecular mechanisms of aging. 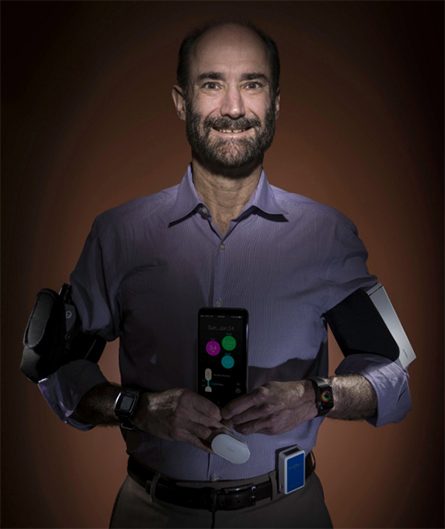 Steve Fisch
Michael Snyder, an associate editor of the journal Molecular & Cellular Proteomics, uses more than eight wearable devices to monitor his health baseline continuously. His research has found that deviations from this baseline, such as heart rate changes, precede symptomatic manifestations of disease.

But who is Michael Snyder? The Stanford B. Ascherman professor and chair of genetics and director of genomics and personalized medicine at Stanford University School of Medicine describes himself as a guinea pig for many of his research ideas. He says he wears at least eight devices designed to measure his personal health baseline continuously (including heart rate, skin temperature, blood glucose and oxygen levels). He loves to tell the story of how he got infected with Lyme disease while helping his brother build fences in rural Massachusetts and detected the infection based on his wearables two weeks later.

A decade ago, Snyder persuaded his then 84-year-old mother to participate in (and be a co-author on) a research study about himself that he published in Cell. Around the same time, he recruited a cohort of over 100 people that his team studied for up to 10 years, which led to the discovery of several cases of early-stage cancers, heart defects and other conditions — so he is also a lifesaver. Overall, he could be described as a curious visionary, pushing the boundaries of medicine into a new orbit.

In a recent paper published in the journal Nature Medicine, Snyder's team describes how the aging process can be detected on a molecular level in individuals over a span of two years. Different people age in different ways, which the researchers refer to as aging types, or ageotypes.

Some ageotypes involve the cardiovascular system, the kidney and liver, and the metabolic and immune systems. Individuals can display one, some or all of the different aging types — Snyder himself is a metabolic, kidney and liver ageotype, and he postulates that there are many more types that his team is not able to detect yet due to insufficient data.

This methodology and conceptual framework can be used to monitor anti-aging strategies on an individual level and potentially intervene. For example, a person with an immune ageotype might eat more garlic or take turmeric as a supplement. It's still in the research stage, but Snyder is working on a commercial test idea.

For Snyder, precision health starts with measuring an individual health baseline. His research and personal experience have shown that a change in heart rate is one of the earliest indicators of many diseases and that a commercial device such as a FitBit can pick up this deviation from the baseline. This also applies to COVID-19, where he and his team were able to detect an elevation in resting heart rate in 81% of cases a median of four days prior to symptoms and in some cases as much as 10 days. "Our group has recently developed this into an early alarming system for COVID-19 and other respiratory illnesses," Snyder said, "and we hope to enroll as many as 10 million participants (in a study)."

Snyder is also a big proponent of continuous glucose monitoring. Participants in his longitudinal study were screened for prediabetes and diabetes, and several of them converted from healthy to prediabetic or diabetic during the study. However, the researchers also saw that individuals determined to be healthy by clinical tests such as fasting glucose levels and A1C levels could display large spikes in blood glucose levels after meals, indicating that their bodies repeatedly were unable to deal efficiently with the glucose from the absorbed meals, further supporting the idea that existing clinical tests are insufficient to capture disease in its earliest forms. Unfortunately, continuous glucose monitoring is expensive.

Snyder points out that "medical economic modeling supports the idea that in many cases it is cheaper to screen for disease to capture and treat it in its earliest stages," but he admits that medical insurance companies have not yet embraced this concept fully. 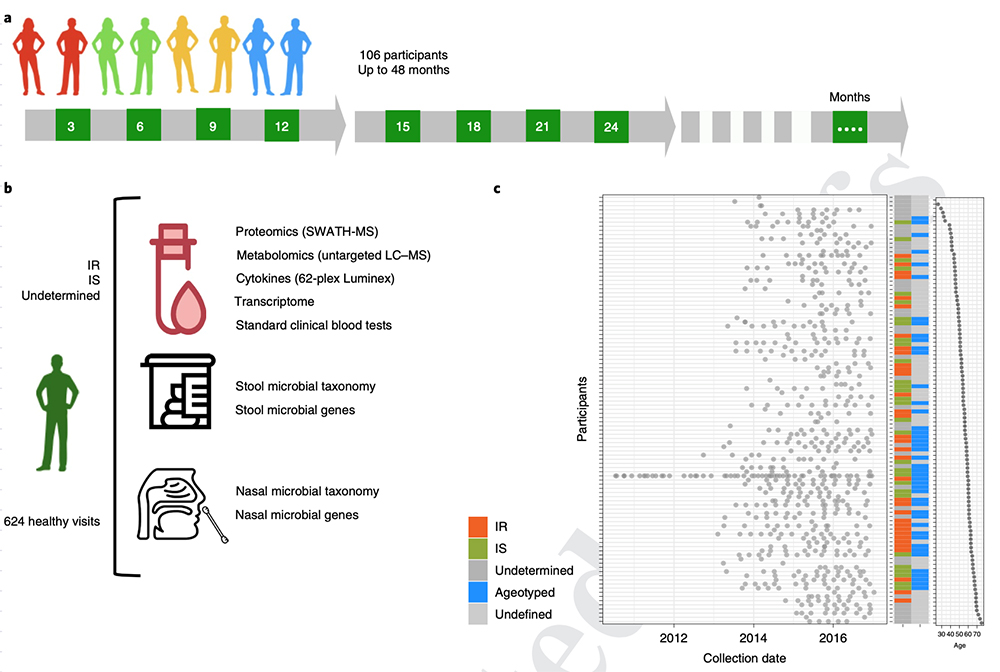 Ahadi et al. 2019.
The Snyder lab's study design for measuring molecular signature of ageing in individuals: (A) 106 individuals were studies over a period of two years. (B) Multiomic measurements for each visit for individuals included transcriptome, proteomics, metabolomics, microbiome and standard clinical blood tests. (C) A graph shows participants, their ages, their visit histories and if they fall into defined ageotypes (blue).

From the journals: JBC
Anand Rao
Social stress can speed up immune system aging
Eric Klopack
Debunking common myths about arthritis
Racheal D'Souza
What is that rash?
Raymond J. Cho
It’s not just the germs — it’s also the genes
Tim Vernimmen
Older people like President Trump are at more risk from COVID-19 because of how the immune system ages
Brian Geiss