For most of November, more than a million tests for COVID-19 were administered each weekday in the United States. Many were the by-now familiar nasopharyngeal swabs, but an increasing number were molecular tests in saliva, first introduced over the summer.

These spit tests are gaining traction because they can be done by the person being tested and don't require a potentially risky contact with a healthcare worker. Some — like the one I took in October — even allow a person to collect a sample at home.

At the neighborhood grocery store's pharmacy counter, a pharmacist opened the small, tidy box and showed me the contents: a collection tube into which I was to deposit a milliliter of saliva (the enclosed instruction sheet had tips on how to get things flowing), a set of labels to fill out with my name and date of birth, a zip-close biohazard bag, and an express shipping envelope. The pharmacist instructed me not to collect a saliva sample on Friday or Saturday; it would only be good for 56 hours. 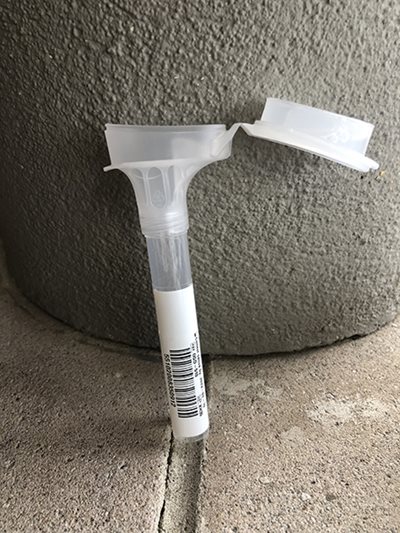 Laurel Oldach/ASBMB Today
The test kit's saliva collection tube is topped with an ergonomic funnel for users
to spit into. When it's snapped closed, the lid releases a milliliter of stabilizing
buffer.

I was surprised that intact viral RNA can last for more than two days in saliva. It was difficult to imagine trying to carry out qPCR with such a sample; although it has been a few years, my experience with the technique involved flash-frozen tissues, buckets and buckets of ice, and a near-pathological fear of RNase. But experts like RNA biologist Joan Steitz, a professor at Yale School of Medicine and the Howard Hughes Medical Institute, suggest those concerns may have been overblown.

"You don't need very much intact in order to get something that you can PCR that's about 100 (nucleotides) long," Steitz said, pointing out that 20 years ago, researchers succeeded in reconstructing the genome of the 1918 influenza virus from just wisps of RNA. "I think that's what's being taken advantage of in these tests."

In the grocery store parking lot, after a solid two minutes of hunching over the collection tube and drooling, I finally reached the vial's fill line. Next, the instructions said, snap the cap closed. Doing so broke a seal that released a milliliter of stabilizing solution. 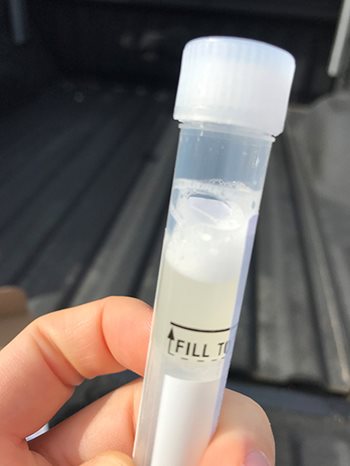 Scott Rabuka is the senior director of molecular products at DNA Genotek, the company that manufactured my saliva collection kit and owns the combination funnel-plus-snap-cap technology. The solution involves "lytic chemistry and stabilization chemistry," he said.

That is, the mixture lyses any cells and inactivates any virus without damaging the RNA in the sample. Rabuka was cagey about the exact chemicals involved, but according to a preprint from an academic group with a competing approach, they are familiar to biochemists: The preprint states that it's an aqueous solution of Tris buffer and ethanol.

DNA Genotek initially manufactured these saliva collection kits for genetic tests as well as genomics, microbiome and other mail-away consumer or clinical assays. The device I used was marked for DNA collection, although the company lately has rolled out comparable devices optimized for RNA stabilization that preserve RNA molecules for longer. Each one costs about $28.

But a more significant competitor in the COVID-19 testing arena may be no stabilization at all. A testing strategy pioneered at Yale involves simply sending raw saliva at ambient temperatures to be tested at a lab. They estimate that, per test, reagents should cost only about $5. 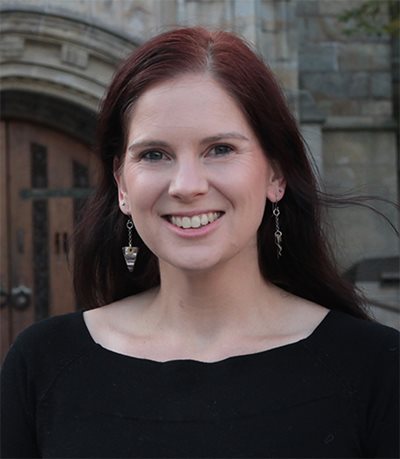 Yale researcher Anne Wyllie co-developed a saliva test for SARS-CoV-2, the virus that causes COVID-19, that now is used in 49 labs in 24 states across the country and is still in the process of rolling out. It received emergency-use authorization from the Food and Drug Administration in mid-August, the cheapest of a wave of saliva-based tests.

Before COVID-19 hit, Wyllie focused on the difference between saliva and nasopharyngeal samples for diagnosing another pathogen altogether. She got involved in coronavirus testing in March, when Nathan Grubaugh, an assistant professor at the Yale School of Public Health who was helping to set up a research program to track the pandemic, asked for training on an RNA extraction kit that Wyllie was working with.

Saliva is a more challenging sample than nasal swabs, which are dunked into viral transport media and always come in the same format. Saliva varies in viscosity; it may be contaminated with sputum or with food particles. Still, based on her earlier research, which had shown that saliva can be a more sensitive sample than nasopharyngeal swabs in patients with pneumococcal infections, Wyllie suggested that the lab try it. In a study they published in the New England Journal of Medicine, the team compared saliva and nasopharyngeal swab samples from hospitalized COVID-19 patients and found that, over time, saliva samples yielded fewer false negatives than the swabs. 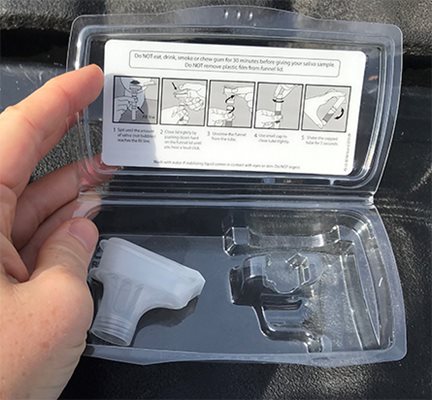 Laurel Oldach/ASBMB Today
Step-by-step graphical instructions inform the test user how to collect and stabilize
a sample. The bed of a pickup truck parked in the grocery store lot turned out to be
a convenient worktable.

Although she joined the project as an RNA extraction expert, Wyllie later found that RNA extraction was not necessary for SARS-CoV-2 detection. After reading that other labs were running PCR assays on swab media with no further processing, she decided to try a similar protocol.

"I was setting up a qPCR, and I was like, 'Got some raw saliva here; we'll just put some into it and see what happens,'" Wyllie said, leaning into her New Zealand accent. "The results weren't perfect, by any means, to begin with — but it was enough to be promising."

After optimizing the protocol, which calls for a lengthy vortex step in lieu of traditional RNA extraction, the team applied for the emergency use authorization the FDA approved in August. Since then, Wyllie said, she's been busy helping other labs set up the test protocol, which is branded as SalivaDirect but not marketed for profit.

Why does testing raw saliva work so well? RNA is famously unstable, prone to hydrolyzing its own backbone; how is it possible that in raw saliva, left at ambient temperatures for hours at a time, it can persist?

"We don't know," Wyllie said. "And remarkably, it seems quite specific to (viral RNA fragment) N1. We've actually heard that others have not found the same stability as we see." When other labs tried the protocol using other regions of the viral genome as qPCR targets, the E or ORF regions, they observed much more degradation.

"The RNA of coronaviruses … appear to fold into highly stable secondary structures," Das said. Coronaviruses have unusually long genomes, some 30 kilobases of RNA; scientists hypothesize that those structures may protect from the types of self-cleavage that RNA is prone to and perhaps also from recognition by innate immune proteins in the host cell. The nucleocapsid-coding region, Das said, seems to be especially rich in these structural regions. 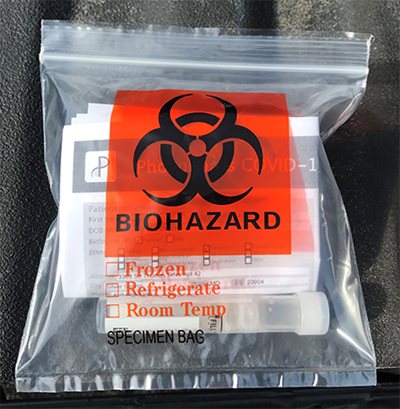 Even when the viral genome is synthesized in a cell-free environment, "big chunks of the genome are protected from chemical reagents that would normally modify single-stranded RNA — including the self-cleavage reaction," Das said. "That may be the answer to why the Yale diagnostic or other saliva diagnostics have a chance."

Researchers also don't know exactly where the RNA SalivaDirect detects is coming from. Based on the facts that raw viral RNA spiked into saliva degrades rapidly and that a vigorous vortex is required to make the protocol work, Wyllie said it's unlikely that the viral RNA is floating freely in saliva. But is it in cells or in viral particles? Frankly, she said, finding out is not a priority for clinical use of the test, which has been her focus.

"The protocol's there; it's pretty easy," she said. "Have a go and let us know. If you find a better version, we're all for it!"

After some hours in a FedEx drop box and in transit, my saliva arrived at a genomics startup called Phosphorus based in Secaucus, New Jersey. Before the COVID-19 pandemic, CEO Alexander Bisignano said, the company used its qPCR machines for quality control to make certain that DNA samples had not degraded before processing them for next-generation sequencing. When the pandemic began, scientists at Phosphorus began trying to conduct tests for SARS-CoV-2 and received emergency FDA approval in June — the second lab approved for testing saliva at home. They now run several thousand tests a week.

Phosphorus' test order process includes an option to consent to research. According to Bisignano, this work is carried out in partnership with academic researchers. Using demographic and medical information combined with viral testing, researchers aggregate and de-identify data for further use. In some cases, when patients consent to DNA testing, researchers may map transcriptomic and genetic information to patients' clinical outcomes in order to investigate relationships between potential biomarkers and disease severity.

While the opt-in process gives little information about what research might be carried out, Phosphorus is acutely sensitive to privacy concerns. In a statement, a Phosphorus spokesperson wrote, "patient data are de-identified according to HIPAA standards and current industry-wide best practices," and added that the company never collects genome information unless a patient specifically has consented.

Lacking those assurances when I was submitting my test, I had taken a pass on the research question. I put my saliva sample in a FedEx drop box on a Sunday; it was shipped on Monday, and my results came in by email and text on Thursday. I'd tested negative, and I had learned a lot. 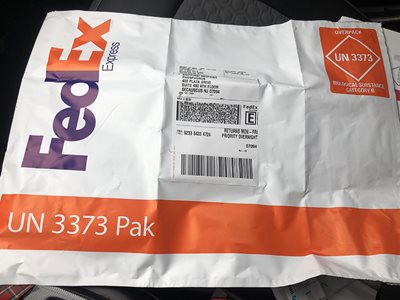 Laurel Oldach/ASBMB Today
The kit was sold with a pre-addressed express shipping envelope.

The FDA has issued emergency use authorizations for 34 molecular tests that detect the viral genome. Most use RT-PCR, but a few are based on other nucleic acid amplification techniques such as loop-mediated isothermal amplification, known as LAMP, or transcription-mediated amplification, or TMA.

RT-PCR is considered the gold standard for diagnosing a SARS-CoV-2 infection, and according to the COVID Tracking Project, a nonprofit organization that collects and reports national data on the pandemic, a majority of states and territories only report on the number and results of PCR tests they conduct. But there are other methods as well.

Seven antigen tests, which detect proteins from SARS-CoV-2, have emergency approval. Some also test for antigens from other respiratory pathogens, such as the influenza virus.

Sixty-one antibody tests designed to detect antibodies the immune system produces in response to a SARS-CoV-2 infection have emergency approval. These are more likely than other types to miss an active infection but can tell whether a patient previously was infected.

Best of BMB in 2021
Laurel Oldach
'Your diagnostic is only as good as what you understand about a disease'
Laurel Oldach
SARS-CoV-2 infection can block pain, opening up unexpected new possibilities for research into pain relief medication
Rajesh Khanna
Viruses that come to stay
Amber Dance
COVID sewage surveillance labs join hunt for monkeypox
Mark Kreidler
From the journals: MCP
Shravanti Suresh