Janice Knepper landed on breast cancer research through her interest in virology. Her most recent publication focuses on the function of a nuclear body protein called Zc3h8, which her lab found can contribute to aggressive tumor behavior in models of breast cancer.

Now a professor and co-director of the program in biochemistry at Villanova University, where her lab focuses on mouse mammary tumor virus, Knepper didn’t start out as a cancer biologist. She studied bacterial membrane proteins during her graduate work at Brown University, and her postdoctoral project at Johns Hopkins focused on cloning a human gene involved in purine biosynthesis. This unlikely project sparked her interest in virology and cancer. 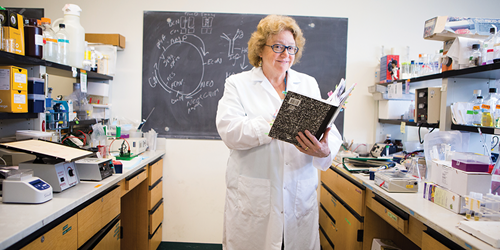 Janice Knepper in her lab at Villanova University, where in 1988 she started researching oncogenes identified in animal models of breast cancer induced by mouse mammary tumor virus.VILLANOVA UNIVERSITY

“We used polyoma virus in one experiment, and I became interested in tumor viruses,” Knepper said.

During her experiments, Knepper observed that polyoma virus was disrupting target genes by insertional mutagenesis and got the idea to use polyoma as a cloning tag to identify genes involved in cancer. She didn’t get to follow this line of work during her postdoctoral project, but other researchers later showed that retroviruses do become oncogenic by this mechanism.

She next worked under virologist Janet Butel at Baylor College of Medicine, where she became fascinated with mouse mammary tumor virus, or MMTV, a milk-transmitted retrovirus that causes mammary tumors in mice as a consequence of its infectious cycle. MMTV evades host immune responses and integrates into the genome of mammary epithelial and lymphoid cells during replication, thereby mutating the genes into which it is inserted. After insertion, viral transcriptional regulation drives increased expression of adjacent genes.

Oncogenes can be identified in this system by looking for insertion sites that result in uncontrolled cell growth, which leads to tumor formation. Oncogenes identified in animal models of breast cancer induced by MMTV then can be investigated in human forms of the disease. This is exactly what Knepper began researching when she moved to Villanova in 1988.

“I became fascinated with MMTV activity in normal and tumor cells,” she said. “At Villanova, I was excited to be able to use MMTV as a cloning tag to identify genes important in cancer in MMTV-infected mice.”

Needle in a haystack

The many strains of MMTV can differ based on their insertion rates into various genes. Before Knepper began her research, several already-described insertion sites were associated with MMTV, so she first used a strain that has lower levels of insertion in these sites. This meant that an increased percentage of the insertions were at novel sites, which increased the potential for identifying new oncogenes. However, it also meant many targets to screen.

Luckily for Knepper, she was at a university with a large undergraduate base and good scientific resources. So she got creative and put her students to work. She had her undergraduate molecular biology laboratory class screen tumors by inverse polymerase chain reaction. Students cloned sequences from 20 tumor cell lines and then mapped them to the mouse genome. Janice Knepper and Amber Shelton work in Knepper’s lab at Villanova University, where Shelton earned a B.A. in 2017 and an M.S. in 2018.VILLANOVA UNIVERSITY Knepper manually culled the list of sequences for genes of potential interest based on her knowledge of the field and references in the literature. Although many of the sequences were not informative, one caught her eye: Zc3h8, originally called Fliz1. Although there were few references about Zc3h8, one mentioned a negative regulatory effect on GATA-3 in immune cells.

GATA-3 is a transcription factor that has roles in development of certain tissues, including mammary glands, and immune and inflammatory responses. It has been described as a clinically relevant marker of human cancers, particularly breast cancer.

Based on this, Knepper put together a plan for testing the role of Zc3h8 in mammary tumor cells.

The National Institutes of Health awarded Knepper an R15 grant in 2013 to identify the role of Zc3h8 in tumor cells, allowing her to recruit more researchers to her project. One of them was John Schmidt, who made this the focus of his postdoctoral research project in Knepper’s lab. Previous publications about Zc3h8 didn’t describe any specific role in cancer or mammary cell development.

“Because my interest was in mammary tumorigenesis, we focused on oncogenic behavior of cells with altered Zc3h8 levels,” Knepper said.

Schmidt, who earned his Ph.D. from Cornell University, brought a background in cell biology and biochemistry to the project to explore the function of Zc3h8 thoroughly and broadly. Fliz1 (Zc3h8), in red, is co-localized with a nuclear body in a nucleus (stained blue with DAPI).COURTESY OF JANICE KNEPPER “My initial approach didn’t produce anything that was scientifically interesting or insightful to the function of Fliz1,” he said. “So we developed new hypotheses more focused on cell and molecular biology.”

Zc3h8 is conserved among vertebrates, and their experiments demonstrated that cells with higher Zc3h8 levels grew faster and had more aggressive tumor phenotypes in cell culture and in mouse models.

Despite its tight control and obvious importance for cell phenotype, Zc3h8 appeared to have inconsistent effects on GATA-3. Knepper initially hypothesized that GATA-3 and Zc3h8 were linked and their effects on cells might be synergistic. However, attempts to knock out Zc3h8 were unsuccessful — cells with extremely low levels of Zc3h8 failed to proliferate, and the researchers were unable to generate knockouts with CRISPR/Cas9.

Furthermore, the link between GATA-3 and Zc3h8 was inconsistent. They observed effects on GATA-3 only in cells that expressed high, unstable levels of Zc3h8. In cells that had moderately changed levels of Zc3h8, they observed dramatically altered tumorigenesis phenotypes but no change in GATA-3 expression. Yet Knepper wasn’t discouraged.

“Poorly understood genes may often generate these variable results,” she said. “We have seen that Zc3h8 appears to be an essential gene whose expression is tightly controlled in cells, so unfamiliar is not the same as unimportant.”

“Since the start of the project, Dr. Knepper encouraged me to always consider how to frame the results into a publication,” he said. “She gave me the freedom to explore new scientific paths, all while remaining focused on the ultimate scientific goal — describing the function of Zc3h8.”

Ultimately, they found that Zc3h8 regulates cell behaviors contributing to tumor growth and invasion through an unknown mechanism. The Zc3h8 protein is localized to the nucleus, where its phosphorylation state potentially could have an impact on transcription, DNA repair, apoptosis and viral defense.

They published their findings on Zc3h8 in July in BMC Cancer.

Knepper’s ongoing research has improved understanding of cancer biology, specifically in regard to virally induced cancers. Her publication with Schmidt on Zc3h8 is only the most recent example. By characterizing this previously unknown gene, their findings add to the growing body of research on genes that could be targeted in human cancers.

Beyond this, Knepper is proud of the impact the research has had on the students involved in the project. Villanova is a primarily undergraduate institution, she said, and this work allowed many undergraduates and master’s students to develop their scientific acumen.

Jephne Wang was a junior at Villanova when she started working in Knepper’s lab. She studied the localization of Zc3h8 in cells and tested its interaction with GATA-3, research that was included in the lab’s recent publication.

“Dr. Knepper is both an inspiring scientist and an amazing mentor,” Wang said. “She taught me how to ask interesting scientific questions, how to approach a research idea and how to patiently test the ideas.”

Wang also looked to Knepper for career advice, and it was her experience in the Knepper lab that inspired her to continue doing cancer research in graduate school. She is now a graduate student at Washington University in St. Louis studying leukemia.

In addition to Wang, all four of the paper’s other non-Ph.D. co-authors have used their experience in the lab as a springboard into research and medical careers. Knepper believes the impact of novel research on the greater scientific community and its impact on those who do the work are equally important. The R15 funding Knepper was awarded provided critical resources for her students to develop laboratory skills. Undergraduate research students at Villanova prepare their own research proposals on independent projects, which they eventually write and defend as a thesis. Knepper says this provides an aspect of intellectual development that is not always present at larger institutions.

“Mentoring undergraduates allows a researcher to inspire the next generation of scientists,” she said. “Most scientists will not themselves make paradigm-shifting discoveries, but by training and mentoring students, they can have a major impact on the scientific future.”

Knepper and Schmidt will continue to investigate Zc3h8. They are focused on manipulating Zc3h8 structure and identifying interacting molecules, she said. Undergraduate and master’s students continue to be crucial members of the research team, and Knepper said she hopes their data will contribute to the fields of cancer and cell biology.

“We believe that our work will encourage others to explore potential Zc3h8 interactions to more fully describe how this unfamiliar gene can profoundly influence cell behavior.”