A master regulator governing color production in yeast and fungi, a novel cholesterol trafficking pathway in blood, and a lipid metabolite that regulates neuronal firing. Read about recent papers on these topics in the Journal of Lipid Research. 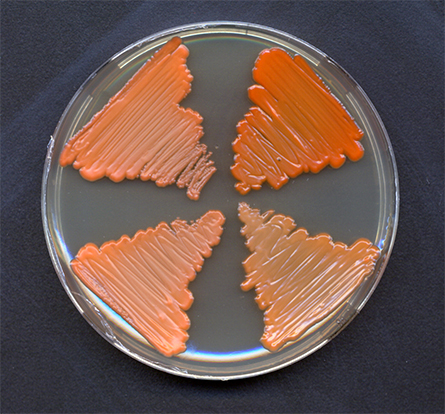 Melissa Gómez-Ríos
This photo shows the color variations in four strains from X. dendrorhous seeded on an agar plate.

Sterol regulatory element-binding proteins, or SREBPs, sense the intracellular lipid environment to regulate expression of key metabolism-associated genes and maintain lipid homeostasis in mammals. These functions are primarily conserved across species; in yeast and fungi, additional pathways are controlled by Sre1, the SREBP homolog, with roles ranging from fungal pathogenesis to growth under hypoxic conditions. Though the roles are conserved, little is known about the mechanism of Sre1 in yeast. Previous research suggests a link between production of ergosterol, the main sterol component of the fungal cell membrane, and carotenoids, the color-producing compounds in these organisms.

To gain greater understanding, authors of a recent study in the Journal of Lipid Research focused their efforts on the yeast Xanthophyllomyces dendrorhous, a natural producer of the carotenoid astaxanthin. Astaxanthin is both a coloring compound and an antioxidant, which lends commercial significance to this study. Melissa Gómez and colleagues from the Universidad de Chile performed comparative RNA-sequencing of modified X. dendrorhousstrains to identify Sre1-dependent genes. They also used chromatin immunoprecipitation combined with lambda exonuclease digestion, or ChIP-exo, to gain further insight into Sre1 target genes.

The researchers observed Sre1-binding motif in the promoter region of ergosterol biosynthesis-associated genes, including genes from the mevalonate, or MVA, pathway. They also identified two genes linked to carotenogenesis, crtE and crtR, as Sre1 target genes. Of these, crtR encodes a cytochrome P450 reductase, indicating the involvement of Sre1 in the biosynthesis of sterols and carotenoids. They found that Sre1 activates the expression of sterol-biosynthesis and MVA pathways and hence regulates carotenoid production in yeast.

These findings may benefit future studies focusing on commercially relevant compounds from yeast and fungi.

Cardiovascular diseases, or CVDs, account for 31% of all global deaths. They are characterized by underlying causes such as atherosclerosis involving anomalies in cholesterol transport and deposition. Therapies such as lipid-lowering drugs have reduced the risk of CVDs but have not eliminated them, indicating the existence of additional factors that influence lipid metabolic pathways and contribute to development of CVDs.

In a multi-institutional study published recently in the Journal of Lipid Research, Ryunosuke Ohkawa from Tokyo Medical and Dental University and colleagues describe a unique role for red blood cells, or RBCs, in regulating cholesterol transport. This may help researchers design more effective treatments.

In this study, incubation of plasma with RBCs resulted in a time-dependent increase in serum/plasma cholesterol levels. Further lipoprotein analysis demonstrated cholesterol efflux to high-density lipoproteins and influx from low-density lipoproteins in a dose- and temperature-dependent manner with no transport to lipoprotein-depleted plasma. Using RNAi machinery and bioinformatic analysis, the researchers identified ATP-binding cassettes ABCA7 and ABCG5, lipoprotein lipase and translocator protein as possibly involved in the transport process. These findings are expected to pave the way for better understanding of CVDs and other disorders of cholesterol metabolism.
DOI: 10.1194/jlr.RA120000635

Lipid-signaling molecules regulate neuronal processes such as fear, anxiety, appetite, memory and pain. Docosahexaenoylethanolamide, or DHEA, a type of lipid signaling molecule, is dependent on peroxisome proliferator-activated receptor, or PPAR, for its downstream neuronal functions. However, tetracosahexaenoylethanolamide, or THEA, has not been characterized.

In a study published in the Journal of Lipid Research, Lin Lin and Adam H. Metherel from the University of Toronto and an international team address this gap by chemically synthesizing THEA to use as a reference standard for functional analysis of naturally occurring THEA in biological samples. Euthanasia of wild-type mice and mice deficient in fatty acid amide hydrolase, or FAAH, resulted in THEA accumulation in whole-brain samples that depended on the mouse genotype (wild-type versus FAAH-deficient) and type of euthanasia (microwave versus carbon dioxide–induced ischemia). Lower THEA levels were observed in wild-type mice and the microwave-only group. PPAR did not seem to play a role in THEA-dependent signaling. However, THEA exposure significantly increased firing from medium spiny neurons of the nucleus accumbens core. The findings from this study present a novel lipid signaling molecule that regulates neuronal excitability in the mouse brain.