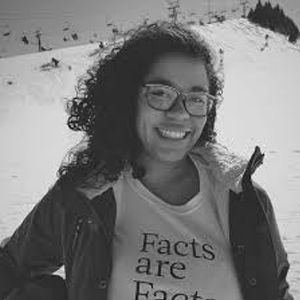 Under the lush thicket of the Peruvian Amazon is a river that boils and heats up to 212°F—hot enough to cook small animals that may fall into its path. But these steaming waters are still teeming with life.

“You see microbial mats just accumulating on the rocks wherever you have the hot springs of boiling water,” says Rosa Vásquez Espinoza, a biochemist and Ph.D. candidate at the University of Michigan, who is studying the diverse microbial life in the Boiling River of the Peruvian Amazon Rainforest.

The Peruvian Boiling River is as wide as a two-lane road, reaches depths of 16 feet, and snakes through approximately four miles of rainforest. In addition to the diverse plants and animals, this geothermally heated ecosystem is home to a variety of lichens, cyanobacteria, bacteria, and other microorganisms that live in the soil and carpet the water and rocks. Scientists gravitate towards microbes living in extreme environments, like the Boiling River, due to their medicinal value.

But for years, communities living along the river have drawn upon its many resources. They use the water to drink, cook food, bathe, or just relax. They harness the vapors for protection and healing practices, Vásquez Espinoza says.

“The river is a source of life for them.” 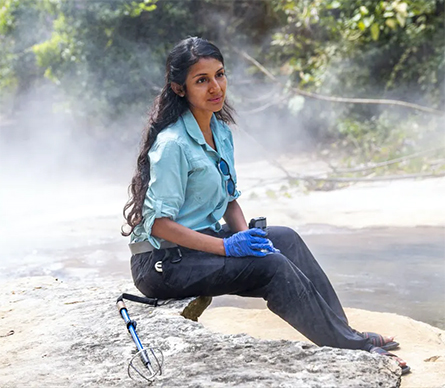 In the summer of 2019, Vásquez Espinoza went on an expedition to the Boiling River to collect its microbes. Now, she is trying to better understand the role microbes play in creating natural products—and how their machinery might be later used to synthesize potential future medicines and therapeutics.

Vásquez Espinoza was born and raised in the capital city of Lima, Peru, but her fascination with nature grew through her grandmother’s time living in the High Andes. Elders like her grandmother knew how to tap into nature’s resources to help treat community members. Later, her grandmother moved to Lima.

“We have a small backyard in my house, and she developed it kind of like a small pharmacy,” says Vásquez Espinoza. She became curious how her grandmother’s plant-based remedies cured ailments, like cuts and common aches. 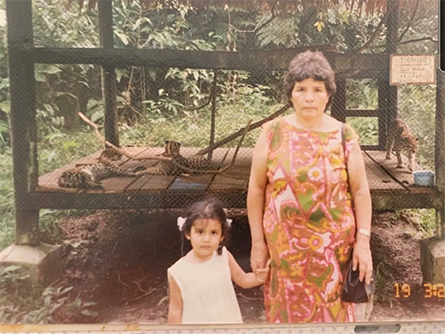 People have frequently studied the Amazon in Brazil, but other parts have remained largely unexplored, like the Peruvian Amazon, which is the second largest rainforest in South America. Vásquez Espinoza visited these remote regions with family and on high school field trips. Through these childhood excursions and later graduate studies and research at the University of Michigan, she started to investigate the microbial and biochemical processes in plants, some used in the Elders’ medicines.

“That was fascinating because I had nobody in my family who was a scientist. So, to me, that was a whole other world,” she says. “Even until this date, we barely know what’s on the micro-level in the Amazon rainforest and that really just blew my mind.”

One Amazon ecosystem that had yet to be thoroughly studied for its microbes was a sacred percolating waterway, previously thought to be local legend. Vásquez Espinoza recalls hearing about the Boiling River years ago. At first, she thought it might be folklore. No one in Lima seemed to know about it, and many local scientists were unaware of the natural phenomenon, she says.

Natural hot springs and rivers are commonly associated with volcanoes. But there are no volcanoes in the Peruvian Amazon, or in most of Peru. Vásquez Espinoza was still determined to find the river. In 2016, Vásquez Espinoza and her mother traveled to Pucallpa, a town in eastern Peru said to be nearest to the river. After inquiring with one researcher who had an inkling of the river’s whereabouts, Vásquez Espinoza was able to identify an obscure route. She took a three to four hour ride in an all-terrain vehicle, traversed about two hours by peke-peke, a local boat, and then trekked on foot for multiple hours. When she finally reached the river, seeing the rolling steam and babbling waters for the first time was breathtaking, she says. 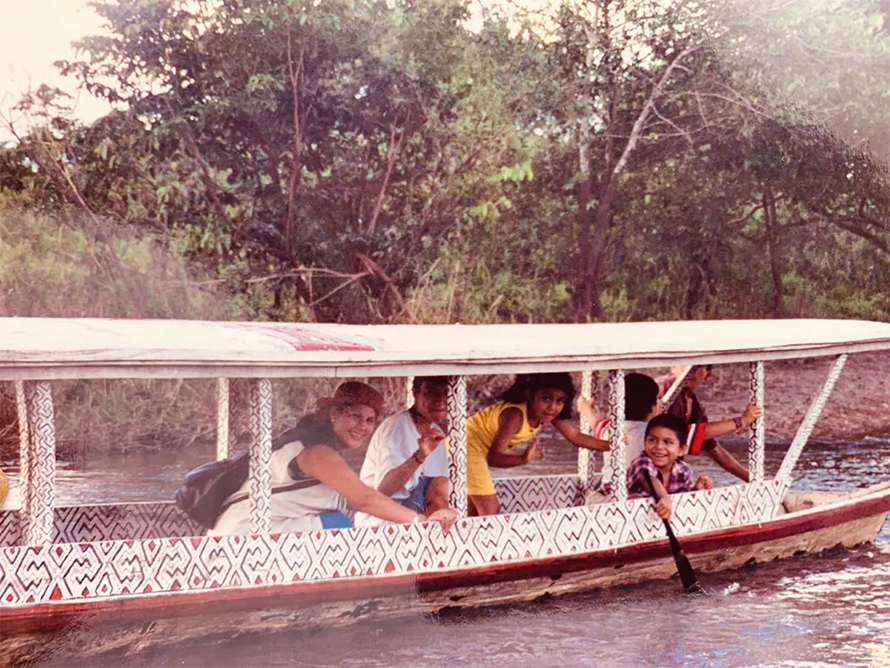 “This river emits such strong vapor that if you look up to the sky, you literally do not know where the vapor ends and where the clouds begin.”

Since her first visit, Vásquez Espinoza has returned to the Boiling River—this time equipped with microscopes, test tubes, and a group of fellow researchers. In 2019, with the help of geoscientist Andrés Ruzo and the blessing of the Boiling River shaman Maestro Juan Flores, Vásquez Espinoza set out in what was the biggest exploration to the Peruvian rainforest so far, with six research teams representing 23 institutions across seven countries.

Most plants or animals are easy to spot, but microbes leave behind different traces. They can form ‘mats’ of various colors. The mats look similar to moss growing on forest trees, but instead, the microbes cluster together in the hot, harsh river bottom, she says. These microbes are called “extremophiles,” a type of organism that has been able to adapt to inhospitable or extreme conditions.

Extremophiles are not exclusive to the Boiling River. They exist in other extreme environments, like in the hot springs in Yellowstone National Park. But Yellowstone’s hot springs are highly acidic. The Boiling River has a different geochemical profile, and the mineral composition is also constantly changing—which makes the microbial ecology unique, Vásquez Espinoza explains. She says it “wouldn’t be fair to do a direct comparison” between the organisms in Yellowstone and those in the Amazon. 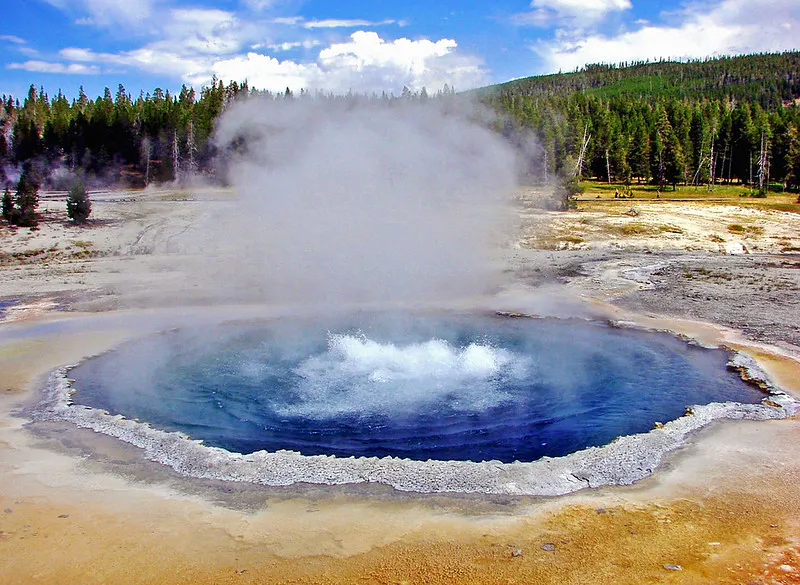 To better understand the unique ecosystem, Vásquez Espinoza is creating a map of the microbes living in the Boiling River and seeing where they fit among other extremophiles from around the world.

After dinner, the team would set up a microscope and start analyzing the samples they collected during the day with the local Mayantuyacu community. The community members were just as curious as the researchers were about what was living inside the river—a waterway that’s integral in so many aspects of their daily life. “We would be literally discovering what’s in our sample with them,” says Vásquez Espinoza. The team left the microscopes with the Boiling River locals so they can continue to make observations. 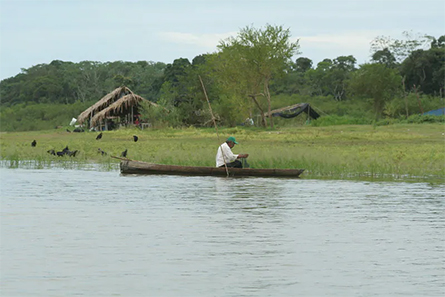 Back at the lab at the University of Michigan, Vásquez Espinoza plans to process the microbes and identify chemical compounds and proteins that have medicinal properties. The researchers can hijack the microbe’s machinery to pinpoint the specific proteins, and later replicate the machinery to make the proteins themselves.

Studying these microbes provides a different lens on the Boiling River ecosystem and the unseen diversity of the Amazon. “It’s not just anacondas and jaguars, and it’s not just about a Boiling River that is exotic and cool,” she says. “Of course, that story is great. I think this is just showing them something different.”

This view of the Amazon can have a massive impact on conservation, she says.

Thanks to Andrés Ruzo’s scientific observations and the continued collaboration with shaman Maestro Juan Flores, people are more knowledgeable about the biodiversity and cultural relevance of the Boiling River. Their efforts have also helped to control tourism to the area. Still, Vásquez Espinoza noticed on this most recent trip that the journey was much easier due to extensive deforestation in the Amazon—an issue she hopes to combat with her research.

“Biodiversity of the Amazon does not end where the eyes meet,” she says. “It’s not just the beautiful plants and the exotic animals. There’s so much more life there and I think it has to be taken into consideration when we talk about conservation of the Amazon.”

Over the last two years, microbes have been included in conservation around the world. Vásquez Espinoza and her team say it’s important to document and fully understand the microbes within the Amazon before they are lost. This can aid in the preservation of the area, she says.

“We cannot protect what we don’t know is there,” says Vásquez Espinoza.

This article is republished from the Massive Science website. A version of it originally appeared on Science Friday.

Attabey Rodríguez Benítez is currently a PhD candidate at the University of Michigan in the Chemical Biology program, where she leverages nature’s power—enzymes—to pave new ways to make life-saving therapeutics.