Cannabis: A secret weapon against superbugs

Although the novel coronavirus has grabbed most headlines in recent months, antimicrobial resistance remains a critical challenges for public health agencies around the world, notably the rapid spread of methicillin-resistant Staphylococcus aureus, known as MRSA. In the fight against this superbug, Eric Brown employs an unconventional research approach, developing novel drug molecules from natural products, specifically from Cannabis sativa.

“Natural products have the potential to solve the issue of drug resistance in pathogenic bacteria,” Brown said. “This is a great resource that we haven’t fully investigated. Researchers in academia have the tools and ability to pursue outlandish ideas, which can be steered to the development of new therapeutic agents.”

As the Canada research chair in microbial chemical biology and a professor of biochemistry and biomedical sciences at McMaster University, Brown leads an interdisciplinary research team that has detected a cannabinoid called cannabigerol or CBG.

“Cannabis plants are known to produce compounds to block the invading pathogens,” Brown said. “We decided to take benefit of the regulatory environment in Canada and use Cannabis to tackle the emerging threat of drug resistance.”

Since the 2018 legalization of marijuana in Canada, Brown’s lab has been studying the antibiotic potential of cannabis. This research has some stigma associated with it, Brown said, but there is circumstantial evidence for medicinal use of the plant. The team established the antibacterial properties of CBG and found that it was highly effective at controlling MRSA in mice. Controlling MRSA is challenging as it is resistant to all known beta-lactam antibiotics. Further, the lab’s study published in the journal American Chemical Society Infectious Diseases found that CBG targeted the cell membrane of bacteria and prevented formation of biofilms, bacterial communities that adhere to each other and surfaces, and also destroyed existing biofilms. 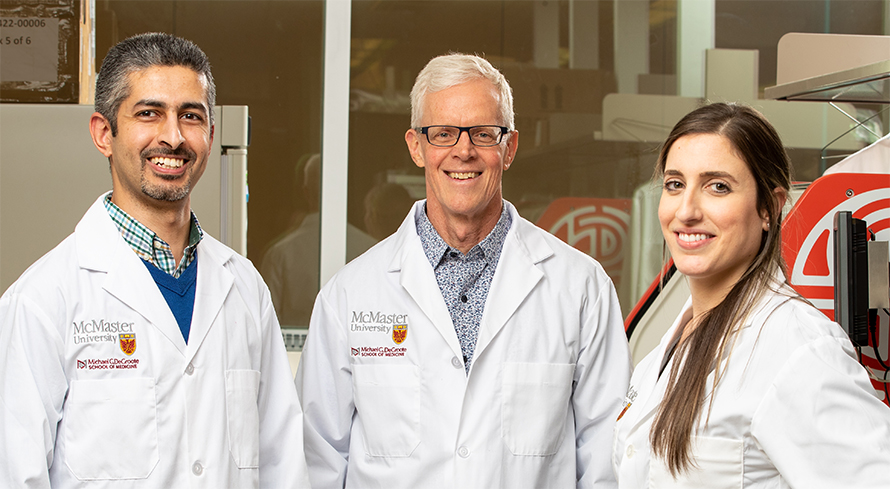 Courtesy of the Brown Lab
From left, postdoctoral fellow Omar El-Halfawy, Eric Brown, and research associate Maya Farha are authors of the lab’s study of CBG.

The team also demonstrated the potential of CBG in combination with antibiotic therapy to combat increasing instances of drug resistance in bacteria. CBG with polymyxin B inhibited the growth of Gram-negative pathogens that are resistant to multiple drugs, such as Acinetobacter baumannii, Escherichia coli, Klebsiella pneumonia and Pseudomonas aeruginosa, revealing the broad-spectrum therapeutic potential for cannabinoids. But the compound is not without drawbacks.

“CBG is great at attacking pathogenic bacteria; however, it is toxic to host cells,” Brown said. “Further research and development are needed to ultimately have a safe drug for therapeutic purposes.”

Although the lab has developed creative chemical-biology approaches to characterize novel antimicrobial compounds from natural products, they face additional challenges. “A major hurdle in natural product drug discovery is the chemical synthesis of these molecules,” Brown said.

For this, they collaborated with Jakob Magolan, a McMaster associate professor of biochemistry and biomedical sciences whose research focuses on using organic synthetic chemistry in drug development. “When you take an unusual research project,” Brown said, “it is great to have a team with complementary expertise, as it helps to advance the field (by) rapidly overcoming hurdles.”

Brown hopes to pursue the commercialization of CBG in collaboration with partners in the pharma industry.