ASBMB Today Science The trouble with the testosterone test
Feature

The trouble with the testosterone test

Elite athletes tend to be a self-selecting group for physical outliers. Someone naturally has a better shot at rising to the top if he or she has an uncommon advantageous trait, whether it’s massive feet or a higher percentage of fast-twitch muscle fibers. But when it comes to testosterone, a steroid hormone that controls the development and maintenance of male characteristics, the issue of how the molecule affects women athletes has dogged professional sports.

While men and women tend to produce different amounts of testosterone, the differences aren’t black and white. “There are very distinct differences between males and females in terms of how much androgen is present within a body, but, yes, there are variations within that spectrum,” says Fred Schaufele at the University of California, San Francisco, School of Medicine. “Everybody is on all different parts of that spectrum, including females with high levels of androgens.”

So how does a governing body overseeing elite athletes establish who can compete as men and who can compete as women? The answer isn’t clear. In July 2015, the Court of Arbitration for Sport in Lausanne, Switzerland, ruled that the International Association of Athletics Federations, which oversees track and field, had to suspend use of its controversial “T-test” for two years. The test, which is based on the measurement of testosterone levels in blood, was introduced in 2011 as the most recent method in a convoluted history of determining which athletes could compete against other women. 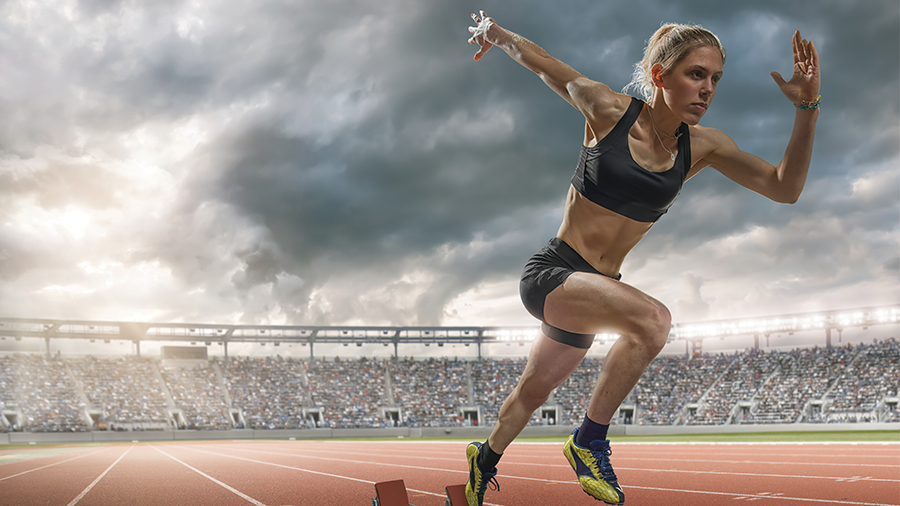 It’s long been argued that the 10- to 15-percent performance gap between men and women in sports is due to the fact that men, on average, endogenously produce 10 times more testosterone than women.

“We know that testosterone is of importance for physical performance due to several effects,” says Angelica Hirschberg at the Karolinska Institutet and Karolinska University Hospital in Sweden. Hirschberg served as the official gynecologist for the Swedish Olympic committee for 15 years.

“Testosterone has some direct anabolic effect on muscle tissue. It stimulates increase in protein synthesis and the increase of muscle growth,” she says.

But the androgens produced naturally in the body can be a headache in sports circles, because their levels can vary over a range between individuals (see “The passport and the prostate”).

For the T-test that the IAAF introduced in 2011, which set the upper boundary for female testosterone levels in blood at 10 nanomoles per liter, the goal was to figure out which athletes could compete against one another as women.

But the test quickly ran into problems; while 10 nanomoles per liter is many times greater than the average concentration of testosterone in women, there are a variety of conditions that cause the excess production of androgens. Women athletes with some of these conditions unexpectedly find themselves being pulled out from competition.

In 2009, an 18-year-old South African runner won the 800-meter sprint at the World Track and Field Championships in Berlin.

“Caster Semenya won with a very great margin, and there were some accusations that she was not a woman,” says Hirschberg. “This was the starting point to develop guidelines for severe hyperandrogenism.”

Semenya was subjected to testing, the results of which have not been made public.

In 2011, the IAAF issued guidelines on female hyperandrogenism, which prevent women who naturally produce more than 10 nanomoles of testosterone per liter from competing.

Hyperandrogenisms occur when the body produces excess levels of androgens, such as testosterone. Androgen insensitivity, the most extreme version of hyperandrogenism, is a rare condition that occurs when a person has internal testes and XY chromosomes but is unable to utilize the testosterone the body produces, which usually causes them to grow and develop female characteristics.

There are exceptions made to the 10-nanomoles-per-liter rule. In the case of complete androgen insensitivity, in which women are unable to take advantage of the excess hormone to build muscle mass and produce red blood cells due to insensitive receptors, the athlete is eligible to compete according to the IAAF’s 2011 rules, says Hirschberg. If women can suppress the high testosterone level by some means, they also can compete. But other than that, women with a blood level of 10 nanomoles per liter of testosterone were banned from competing in track and field events. (Women who have higher than normal levels of testosterone but don’t hit the 10 nanomoles-per-liter level, such as those with polycystic ovary syndrome, were not affected by the guidelines.)

Before the T-test came into play in 2011 to measure testosterone in blood, athletes with androgen insensitivity typically were flagged by chromosome testing, which looks for the presence of the SRY gene on the Y chromosome. That test was introduced by the International Olympic Committee at the 1968 games in Mexico City and was used to prevent women with Y chromosomes from competing for nearly three decades.

In 1992, the IAAF ceased routinely using the chromosome test on all athletes but kept the option to employ it if any suspicions about an athlete’s sex arose. The IOC voted to discontinue the practice in June 1999.

The T-test’s suspension in 2015 came as the ruling in Dutee Chand’s appeal to the Court of Arbitration in Sport. Chand, an Indian sprinter with hyperandrogenism, had been banned from competing in track and field events in 2014 by the IAAF’s Indian affiliate, the Athletics Federation of India.

The court determined that there’s not enough evidence that athletes with hyperandrogenism necessarily have an unfair advantage over their competitors. According to the court’s ruling, “we have two years, as more scientific evidence is required to show the degree of the advantage if a women has testosterone levels in the male range,” says Hirschberg.

For some officials in the global athletic community, the test’s reinstatement, or the establishment of a benchmark of some sort, appears to be an inevitability.

“I believe some kind of regulation is necessary, otherwise I don’t think other athletes will like to compete when you know in advance who will win,” says Hirschberg.

Were the T-test to be reinstated in two years, Hirschberg notes, testosterone levels can be brought down to a manageable level in advance of competition.

“It’s easy to suppress the testosterone levels. You can do it by taking oral contraceptives, for instance,” she says. “It could be gradual, but within a couple of weeks you could suppress from more than 20 nanomoles per liter to 1 nanomole per liter.”

The issue of testosterone levels in women track and field athletes is complicated, as proved by the 2016 Olympic Games in Rio. Chand finished 50th in the 100-meter dash; Semenya won the gold medal in the 800-meter dash.

Women athletes will have to wait until July for the Court of Arbitration in Sport’s response after the IAAF presents the scientific evidence it’s been gathering and after experts in testosterone and performance evaluate the evidence.

Until then, the IAAF said in a 2015 press release, “The IAAF will make no further comments on this subject until those discussions are concluded.”

The passport and the prostate

Whether someone’s high testosterone level is caused by doping or natural causes can be hard to determine.

“One reason that testosterone is more popular among doped individuals is that they believe that it’s more difficult to discern the exogenous testosterone” in urine tests for doping, says Anders Rane at the Karolinska University Hospital in Sweden.

One of the methods for ensuring that an athlete’s androgens aren’t a byproduct of doping is the World Anti-Doping Agency’s Athlete Biological Passport. The program, which was implemented in 2009, monitors athletes’ endocrine and steroid levels year-round. It provides a record of what an athlete’s normal baseline signals are for various molecules, including testosterone.

“The system tells you, ‘OK, if you’ve naturally got a high testosterone, this is your baseline,’” says Olivier Rabin, the science director at the World Anti-Doping Agency. “The anti-doping monitoring takes this into account.”

Another potential method for discerning between exogenous and endogenous sources of elevated testosterone could be testing for the levels of prostate-specific antigen, a protein produced by the prostate. Elevated levels in men commonly are used as an indicator of prostate cancer.

Because women don’t have a prostate gland, it was widely believed that they didn’t produce prostate-specific antigen, says Eleftherios Diamandis at the University of Toronto and Mount Sinai Hospital in Canada. But, he says, “20 years ago, we found that women actually make PSA, and this PSA in women is usually made in the breast tissue.”

He adds that because the PSA gene is regulated by androgens, “we speculate that women who have hyperandrogenic syndrome will have elevated PSA.”

In the past, Diamandis says, it was very difficult to measure PSA levels in women, but recently developed assays have made it possible to detect the protein at minute concentrations. In a recent study, he and his colleagues found that normal women make about 1,000 femtograms per milliliter of PSA, which is about one one-thousandth of men’s production.

“We were surprised to see that the (women) athletes have lower PSA than normal women who do not exercise,” says Diamandis. “We don’t know the mechanism.”

With this knowledge about PSA levels, Diamandis says, “this may be a good test for doping, because, if a woman takes a steroid, an androgenic steroid, the PSA levels will go up, in both serum and urine.”