Milk is a complicated liquid. Among its ingredients, which include lactose, lipids, free oligosaccharides and proteins, the free oligosaccharides perform the essential prebiotic roles of stimulating the growth of beneficial bacteria and preventing harmful bacteria from binding to epithelial cells in the gut. In a paper recently published in Molecular & Cellular Proteomics, researchers at the University of California, Davis, report that the bacteria in infants’ guts are also capable of digesting glycoproteins. 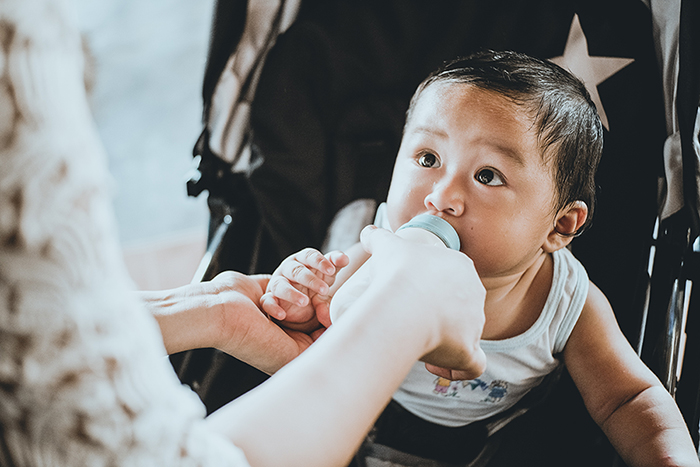 The researchers previously had thought of glycoproteins as a source of carbohydrate-bound amino acids that were only consumed by the infant, “but it turns out that parts of it, particularly the oligosaccharide, may also be feeding the microbiota,” explains Carlito Lebrilla, the paper’s senior author. “It has a dual use here — to give nutrition to the host, but also to enhance the microbiota.”

The new paper is a unification of sorts for the researchers, who have focused on the oligosaccharide components of human milk for a number of years and had an interest in the interactions between the microbiota and oligosaccharides.

To determine the effects of digestion on the oligosaccharide portions of glycoproteins in breast milk, the researchers collected breast milk and stool samples from mother–infant pairs enrolled in the university’s Foods for Health Institute Lactation Study. They then isolated and cultured the dominant bacterial subspecies of Bifidobacteria longum from the stool samples. B. longum, in aggregate, accounts for up to 90 percent of the gut microbiota in milk-fed infants.

The investigators fed the bacteria the milk glycoproteins extracted from the breast milk. After demonstrating that the bacteria were breaking down the glycoproteins, Lebrilla’s group obtained a detailed profile of the oligosaccharides that had been released from the glycoproteins by subjecting the fecal samples to tandem mass spectrometry. The researchers were surprised to find the presence of degraded N-glycans in the fecal samples. N-glycans had been hypothesized as digestive targets because they were present in breast milk, but until now, they had not been observed post-digestion. The finding by Lebrilla and colleagues indicates that the bacterial species act upon the oligosaccharide components of the compound, which suggests the sugar moieties on breast milk glycoproteins can fuel the gut microbiome.

A collaborating group led by David Mills at the university’s Foods for Health Institute then sequenced the bacteria to get a comprehensive look at which enzymes were responsible for breaking down the milk oligosaccharides and when they were expressed, as well as their specificity. They found that one of the subspecies of B. longum contained genes for a glycoprotein-cleaving endoglycosidase. The researchers also noted that an exogalactosidase, BLNG_00015, was present in another dominant B. longum subspecies and capable of degrading glycoproteins with a terminal monosaccharide galactose residue. This, Lebrilla explains, is evidence of the specificity of the microbial enzymes for the glycoproteins.

Future work for Lebrilla and his colleagues will include examining the milk proteins that are being deglycosolated, exploring why certain milk protein concentrations seem to confer greater protection against stunting in infants than others, and investigating how the microbiota change in humans from a milk-oriented micobiota to a plant-based microbiota as we age.