Chloroplasts do the darndest things 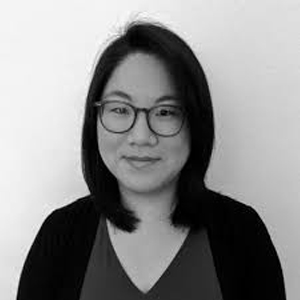 Life as we know it wouldn’t be possible without chloroplasts — those tiny, bean-shaped structures inside plant and algae cells that harness the sun’s energy to turn water and carbon dioxide into essential sugars and oxygen. The very color of our planet, rich in green hues, is down to chlorophyll, the light-absorbing molecule in chloroplasts that’s central to this process of photosynthesis.

ODRA NOEL / WELLCOME COLLECTION
Organelles known as chloroplasts use sunlight, carbon dioxide and water to generate
oxygen and sugars. And they’ve got lots of other tricks up their sleeves.

But while chloroplasts and photosynthesis are famous, these organelles and their larger family — known as plastids — actually perform a multitude of tasks.

Plastids are found in plants, a diverse group of aquatic organisms known as algae and even some parasites (such as the malaria-causing Plasmodium falciparum). And they come in many flavors. There are amyloplasts, colorless plastids found in roots and tubers such as potatoes that produce and stockpile starch. There are chromoplasts, which synthesize and store carotenoids, pigments that give flowers and fruits their color. What’s more, the identities of plastids are fluid — and their changes are often clearly visible. When the peel of a clementine goes from green to orange, this shift in color is the result of chloroplasts turning into chromoplasts.

The more researchers study them, the clearer it becomes that chloroplasts and their plastid siblings are avid multitaskers. They make molecules required for the survival of their hosts and creatures higher up the food chain — like humans. They play crucial roles in relaying signals involved in a plant’s defenses against pathogens and other stressors. “Plastids are the metabolic and the sensing hubs of organisms that contain them,” says Katayoon Dehesh, a molecular biochemist at the University of California, Riverside, and coauthor of an overview of plant organelle signaling in the Annual Review of Plant Biology.

Here’s a look at what we know about the roles of chloroplasts and their larger plastid family. 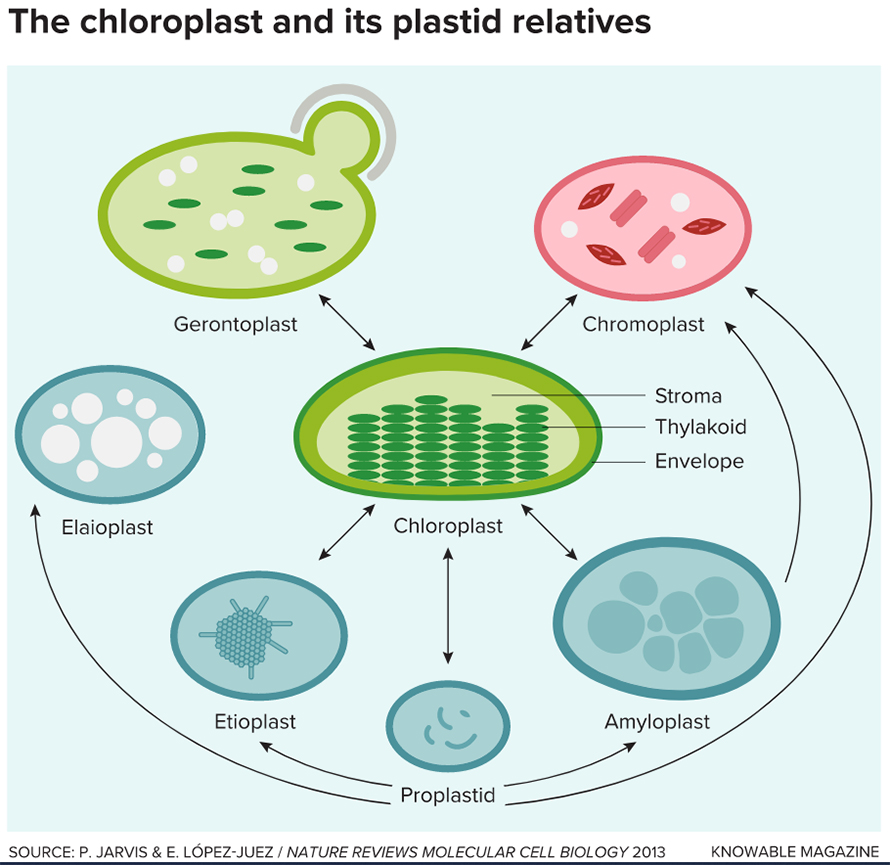 Plastids are a group of organelles found in the cells of plants, algae and some other small organisms. They come in different forms — each with its own specialized function —and can change identity to match the specific needs of a cell. For example: Amyloplasts store starch; elaioplasts store lipids; chromoplasts store pigments that give flowers and fruits their colors. Also shown are proplastids (immature plastids), etioplasts (chloroplasts before exposure to light) and gerontoplasts (which develop from chloroplasts as leaves decay).

The factories that fuel life

In addition to carbohydrates such as sugars and starches, and pigments like carotenoids, plastids are involved in producing a number of other molecules essential for plant survival, such as lipids, amino acids and vitamins that plant-eating animals depend on as well.

These organelles are chock-full of important biosynthetic pathways, says plant cell biologist Tessa Burch-Smith of the Donald Danforth Plant Science Center in St. Louis. That aspect “just gets lost, because photosynthesis so dominates when we talk about chloroplast biology — because it is so important and so unique.”

Unlike photosynthesis, these metabolic pathways do not occur entirely within the plastids, although initial production often begins in them, Burch-Smith explains. Other organelles, such as the endoplasmic reticulum, later pick up the biosynthetic baton.

A central hub for signaling

Sending signals is part and parcel of being a plastid — and there are solid evolutionary reasons why that may be. Like their energy-producing cousins, mitochondria, plastids probably originated when an ancient bacterial cell was engulfed by a precursor to today’s nucleus-containing eukaryotic cells. In support of this idea, known as the endosymbiotic theory, plastids possess their own set of DNA. And even today, plastids bear resemblance to cyanobacteria: single-celled organisms that create their own energy via photosynthesis.

But during the more than 1.5 billion years after endosymbiosis is estimated to have occurred, many plastid genes migrated from the plastid to the cell’s nucleus. In fact, the nucleus houses most of the genes that carry instructions for making the thousands of proteins found within chloroplasts and other plastids. As this shift occurred, communication with the nucleus became critical to plastid survival.

“The chloroplast is this weird mixture of two spatially separate genomes,” says Jesse Woodson, a plant biologist at the University of Arizona. “To make that work, there needs to be cross talk: Chloroplasts need to be telling the nucleus, ‘I need a little bit more of this’ or ‘I need a little bit less of that.’”

Scientists reported an early sign of this chatter between chloroplast and nucleus back in 1979 while studying a mutant form of barley that grew green, white and striped leaves. Chloroplasts in the green leaves were normal. But in the colorless leaves, the plastids were deficient: They could photosynthesize and couldn’t make proteins (usually, plastids have their own protein-making ribosomes and manufacture some of their own proteins). Strangely, though, these plastids also were deficient in proteins that aren’t made in the plastid. The genes for these proteins are housed in the nucleus and the proteins are made in the normal ribosomes of the cell. So why were the plastids deficient in these proteins too?

The answer, the authors suggested, was that the chloroplast messages the nucleus, and will instruct it — in line with its needs — to ramp up or ramp down the activity of genes involved in photosynthesis. In the case of those deficient plastids in the white leaves, this line of communication breaks down.

The evidence for such plastid-nucleus signaling was bolstered in 1993, when a group led by plant biologist Joanne Chory at the Salk Institute for Biological Studies in La Jolla, California, created certain mutations in the mustard plant Arabidopsis, which is often used in plant research. The mutants have faulty communication between organelles so that chloroplasts can’t tell the nucleus to turn off activity of photosynthesis-related genes when it is warranted, such as under conditions of stress. This failure to communicate appears to come at a cost — the mutant seedlings developed chloroplasts more slowly than ones without the mutation, indicating that chloroplast-nucleus communication is important during early growth.

Since those pioneering studies, researchers have identified several other plastid-nucleus signals involved in adapting to stress and in dealing with other situations, such as plant growth and flowering. Scientists have also discovered that chloroplasts send signals to other organelles too, such as the mitochondria. 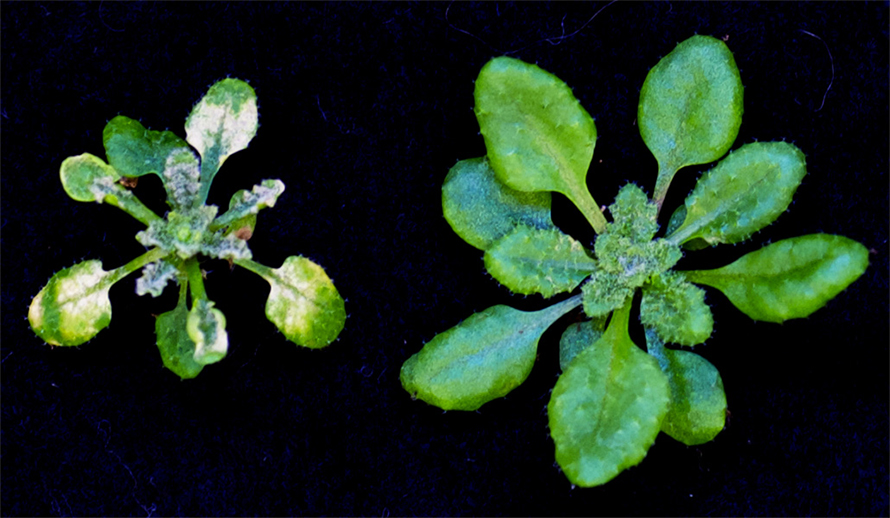 PHOTO BY SAMANTHA ORCHARD
When chloroplasts are stressed, they can send signals to the nucleus that trigger cell death and limit growth. The Arabidopsis thaliana plant on the left has a mutation that makes the plant accumulate higher-than-normal levels of signaling molecules called reactive oxygen species, resulting in overexuberant messages to the nucleus and a sickly, stunted plant. Genetic changes that block these reactive oxygen signals can make the plant resilient in the face of stress, as seen in the vigorously growing plant on the right.

There are several ways that chloroplasts do this. They act locally, producing defense-related hormones such as salicylic acid and jasmonic acid to help fend off invading microorganisms. They can also provide warnings of danger over longer distances — from one part of a plant to another, or even to a neighboring plant. “Immunity has evolved to use chloroplasts in different ways,” says Murray Grant, a molecular plant pathologist at the University of Warwick in the UK and a coauthor of the 2021 plant defense review. “Not every chloroplast is doing the same thing.”

Chloroplast-to-nucleus signaling is a key part of these plant immune processes — in fact, when a plant cell is infected by a pathogen, chloroplasts can often be seen clustered around the nucleus. Among other things, when the plant is threatened the chloroplasts pump out reactive oxygen species: small chemicals like hydrogen peroxide and superoxide. These reactive oxygen species can then instruct the nucleus to ramp up production of proteins that help fight the foreign invaders.

But some pathogens have cleverly devised methods to immunocompromise plants — by targeting their chloroplasts. Certain bacteria, for example, hijack the machinery within chloroplasts so they overproduce a key hormone called abscisic acid. Abscisic acid is useful to the plant under certain conditions: It helps protect it against freezing, drought and other environmental stressors. But it can also suppress hormones involved in fighting off pathogens, such as salicylic acid.

Opposing pressures of this kind can mean that plants can become more susceptible to infections under stressful situations like drought, Grant says. 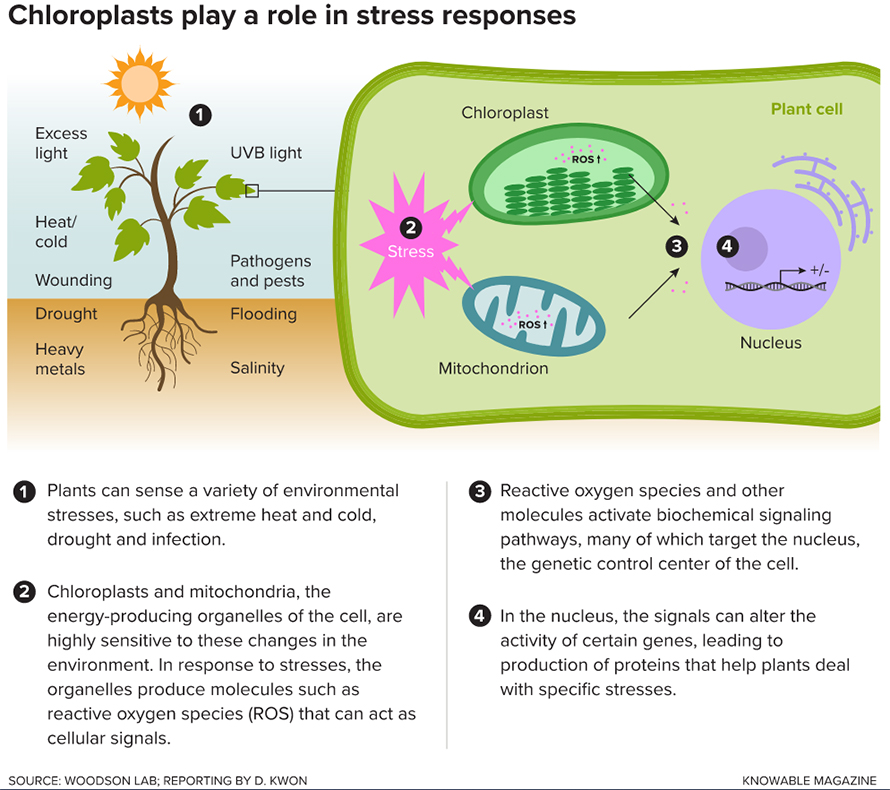 Plants must weather a multitude of changes in their environment. Chloroplasts play a crucial role in enabling plant cells to survive various stresses, such as drought, flood and infection.

Chloroplasts are highly sensitive organelles that can sense changes in the environment, such as shifts in light intensity and temperature. Today, scientists are investigating how chloroplasts are responding to environmental changes that are occurring due to climate change. Key questions, says Burch-Smith, center on what happens as floods and droughts increase in number and severity.

“How do these impact the chloroplast and its ability to continue in photosynthesis, and in all these other metabolic pathways?” she says. “How does it signal the rest of the plant to adapt to those changing conditions?”

Answering these questions is important for understanding the future of plant life on our planet, the scientists say. This includes agriculturally important plants, notes Woodson. In rice, for example, researchers have reported that water deprivation can cause problems in chloroplasts which, in turn, can limit the plant’s ability to absorb nitrogen, a crucial nutrient. “Right there, there’s already some potential that these sorts of signals could have a big impact on their ability to grow.

“There’s a big untapped potential to looking at this in agriculturally important crops,” Woodson says. “I think that’s the next big step in the field.”

This article originally appeared in Knowable Magazine, an independent journalistic endeavor from Annual Reviews. Sign up for the newsletter.

Diana Kwon is a freelance science journalist based in Berlin, Germany. She primarily covers the life sciences and health, and her work has appeared in Scientific American, The Scientist, Nature, Knowable Magazine and many other publications.

Gain-of-function research: All in the eye of the beholder