In 1983, Carol Greider and her Ph.D. advisor, Elizabeth Blackburn, discovered telomerase, the enzyme that replenishes telomeres. For this, they were awarded the 2009 Nobel Prize in physiology or medicine, and their seminal work opened the gateway for decades of work that has advanced our understanding of aging and human lifespan — including new research by their own former postdocs. 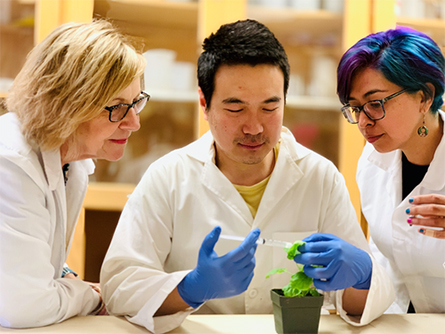 Courtesy of Dorothy Shippen
At work in the Shippen lab at Texas A& M are, left to right, Dorothy Shippen, first author of the recent paper Jiarui ‘Gerry’Song and Claudia Marcela Castillo-Gonzalez.

Those postdocs, Dorothy Shippen and Julian Chen, knew each other long before their first collaborative project, a study published in Proceedings of the National Academy of Sciences.

“Julian and I came out of Carol Greider and Elizabeth Blackburn’s research labs, respectively,” said Shippen, a university distinguished professor and regents fellow in Texas A&M’s department of biochemistry and biophysics. “Due to our similar research interests, we kept crossing paths at various research conferences for many years. Our respective research groups used different tools to answer fascinating questions about telomerase, and Julian and I developed a mutual admiration for each other’s work.”

At the 2019 Cold Spring Harbor Telomeres and Telomerase Meeting, members of Shippen’s group met up with Chen’s lab team (Chen is a professor of biochemistry at Arizona State University) and discussed their ongoing research projects. Those conversations resulted in a collaboration that uncovered a pivotal discovery about telomerase RNA.

Telomeres are repetitive DNA sequences that safeguard the ends of linear chromosomes. Healthy cells have a limited replicative lifespan, and as they age, their telomeres shorten, leading to eventual cellular senescence and/or apoptosis. However, the ribonucleoprotein enzyme telomerase counteracts this shrinking process and helps lengthen telomeres with addition of short DNA repeats, thus extending the life of the cell. The level of telomerase activity is crucial in determining telomere length, particularly in aging cells.

Many researchers have focused on the use of telomerase in cancer and anti-aging treatments. However, much is unknown about the telomerase, particularly its evolution. The enzyme is markedly different across various kingdoms, making it important to understand the components that contribute to these evolutionary differences and their role in telomere maintenance.

Telomerase complexes contain two core components: a catalytic subunit and an RNA subunit. The catalytic protein subunit — telomerase reverse transcriptase — has been well characterized. The RNA subunit serves as a template for the addition of new telomeric repeats by the reverse transcriptase. Researchers first isolated it in 1991 in ciliates and later discovered its homologs in yeast and humans.

“The telomerase RNA in these three different kingdoms — ciliate, yeast and humans — are very different with regard to transcription machinery, sequence, etc.,” Chen said. “A long-standing question in the telomerase biology field is, how did these various telomerase RNAs evolve so differently?”

Researchers tried for years to isolate telomerase RNA from plant species. They included Shippen, who believed the plant kingdom held the key to unanswered questions in telomerase evolution. 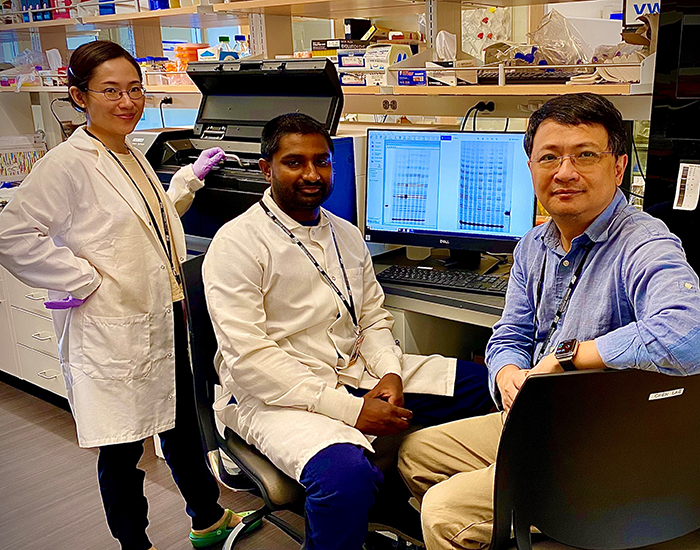 Vanae Goheen-Holland
Pictured in the Chen lab at Arizona State are, from left, Yang Li, a research assistant professor; Dhenugen Logeswaran, a postdoctoral fellow; and Julian Chen. All were authors on the recent PNAS paper.

“Plants often evolve unique solutions to fundamental biological challenges,” she said. “Plant telomerases may tell us something new about longevity and aging and how human telomerase could be regulated. Hence, it was essential to discover this missing subunit.”

“Our investigations began with some genetic and phylogenetic analysis of AtTR,” Shippen said. “We then decided to follow up by further characterizing this subunit and finding new homologs. This is where Dr. Chen and his team played a crucial role.”

Chen and his team worked with the Shippen lab to determine the structure and function of the isolated AtTR and identify its homologs in many other plant species.

These analyses, coupled with studies in cells and animal models, uncovered a startling revelation: The plant telomerase RNA was an intermediate between telomerase RNA from humans and from lower eukaryotes. The subunit contained signature marks from both animal and protist kingdoms.

“We called this intermediate plant telomerase RNA the ‘missing link’ between ciliates and vertebrates,” Chen said. “It significantly expanded our knowledge about telomerase evolution.”

To answer this question, Chen said, “Our next step will be to study telomerase RNA in several ancestral plant species to characterize their structure and determine which RNA polymerase they were transcribed by. Hopefully, we will soon have a comprehensive picture about how telomerase RNA has evolved along different eukaryote lineages.”

Shippen wants to delve deeper into the telomerase ribonucleoprotein complex. She believes that a different group of proteins associate with the reverse transcriptase to make it functional in plants.

“By uncovering these accessory components,” she said, “we will gain insight into the interface between the canonical telomerase function and other cellular functions such as metabolism.”

Shippen and Chen will continue collaborating to study plant telomerase. They expect future research into the plant system to have translational application in humans, particularly for cancer and anti-aging treatments.

While plant and human telomerases differ, understanding the plant telomerase mechanism and its evolution might help researchers engineer new strategies to regulate and manipulate human telomerase. For example, higher levels of telomerase immortalize cancer cells, enabling them to live and grow much longer than normal cells. Targeted inhibition of telomerase in cancer might have therapeutic benefit.

Chen and Shippen believe that applications of their findings in humans are years away, but they are optimistic about the future of telomerase research.

“We see a lot of opportunities ahead,” Chen said. “This is indeed an exciting time to be working in the field of telomere biology and telomerase evolution.” 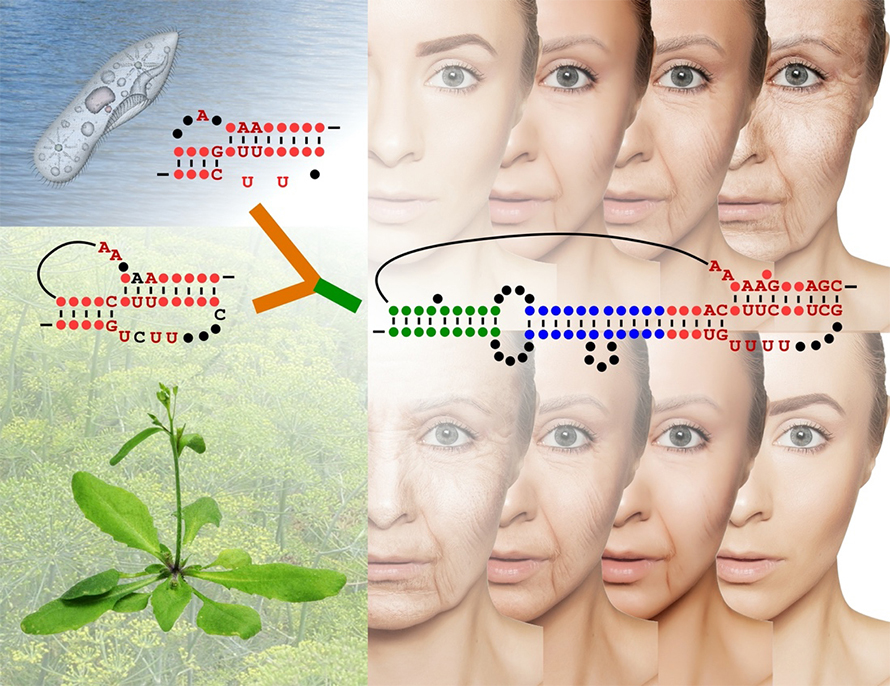 Courtesy of Julian Chen
This image represents the relationship between aging and telomerase. The structure and function of a missing component of telomerase enzyme from plants hold promise for aging and cancer research.