We offer summaries of recent papers from the journal Molecular & Cellular Proteomics. Topics include how marine iguanas mark their turf, a new way to study Parkinson’s disease and glycosylation in influenza A.

Femoral glands play a key role in chemical signaling in many lizards and amphibian species, including marine iguanas. Male iguanas secrete substances from their femoral glands to attract female mates, and researchers hypothesize that certain lipids in these secretions aid in territory marking and male quality communication. Recently, Fredrick Tellkamp, Franziska Lan and a team of German researchers published a paper in the journal Molecular & Cellular Proteomics that focused on identifying the function and identity of proteins found in femoral gland secretions using a comprehensive proteomic approach.

The researchers developed the first transcriptome data set and used this information to identify various phospholipase isoforms in marine iguanas. They used prediction software to characterize unidentifiable proteins and learned that two of the 15 candidates were enriched in femoral gland secretions. Next, they used several biochemical methods, including mass spectrometry analysis, to characterize these compounds further. This analysis revealed several thousand hits, and further experimentation identified epidermis-specific proteins, lipid-binding proteins and immune-responsive proteins.

The work also yielded femoral gland proteins that have antimicrobial properties. This finding led to the generation of a library of antimicrobial peptides, and the researchers selected 17 AMPs for analysis. Of these 17 AMPs, peptide 4 showed strong antimicrobial effects againstE. coli and Bacillus subtilisin growth rate reduction experiments. The researchers speculate that AMPs and immune cells in femoral gland secretions provide protection against bacterial infection and degradation when the femoral gland opens during male iguana territory marking, which is crucial to survival. 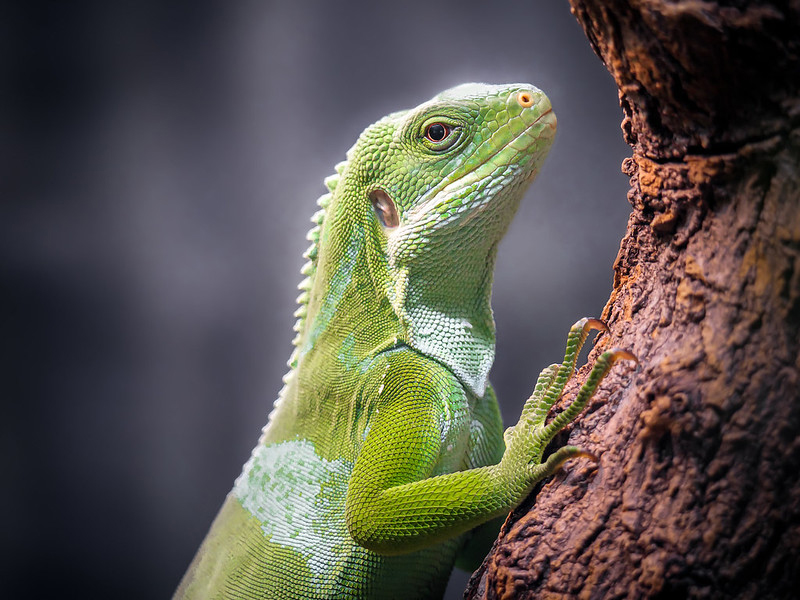 A new way to study Parkinson’s

Parkinson’s disease is a progressive, neurodegenerative disorder that causes involuntary loss of control over some body functions. The causative agents of some Parkinson’s cases are mutations in the leucine-rich repeat kinase 2, or LRRK2. These changes lead to increased kinase activity, which enhances the phosphorylation of an important protein known as Rab10 involved in disease manifestation. Recent work published in the journal Molecular & Cellular Proteomics by Ozge Karayel of the Max Planck Institute of Biochemistry and an international team focused on determining the stoichiometry of Rab10-Thr73 in Parkinson’s patient samples.

The researchers developed a highly sensitive, mass spectrometry–based assay, mxSIM, to show that Rab10 phosphorylation is a direct readout for LRKK2 activity. Using mxSIM coupled with in-gel digestion, the researchers detected small differences in LRRK2 activity in mouse fibroblast cells. Next, they tested Rab10 levels before and after LRRK2 inhibition in both human peripheral blood and Parkinson’s patients and found increased Rab10-Thr73 phosphorylation levels in the patients as compared to healthy controls. Overall, this work provides new knowledge about the role of Rab10-Thr73 in LRRK2-associated Parkinson’s. Furthermore, these findings can aid the development of new medications that will treat disease progression, not just the symptoms. Lastly, the mxSIM technology can be used to study other diseases.

Measuring glycosylation in influenza A

Influenza A is an RNA virus that affects birds and mammals. Strains of this virus caused the 1918 Spanish flu pandemic and the more recent 2009 H1N1 swine flu outbreak. This virus has a high mutation rate, which ultimately helps it to evade the host immune response. This is why researchers create new flu vaccines annually. Influenza vaccine development takes advantage of antigenicity of the influenza A envelope protein hemagglutinin, or HA, and its glycosylation state.

Recent work published in the journal Molecular & Cellular Proteomics focused on determining if there is a difference in glycosylation at the protein level in two related influenza strains, using a statistics-based approach. Deborah Chang of Boston University and a team of U.S. researchers used the Tanimoto similarity metric and determined the hemagglutinin glycosylation similarities for the wild-type SWZ13 strain versus a SW13 mutant. The mutant strain contained the same sequons as the wild type, but at the whole glycoprotein level the two strains were measurably distinct in glycosylation due to alteration of head group glycosylation. The researchers concluded that the Tanimoto similarity metric is useful for determining alterations in glycoprotein glycosylation from bottom-up glycoproteomics data.  This work will aid future vaccine production.