Secrets of spider silk proteins. Potential Alzheimer’s target treatments. Structure of a deadly virulence factor. Read about papers on these topics recently published in the Journal of Biological Chemistry.

Orb-weaving spiders can produce up to seven types of silk for different purposes, and the silk’s mechanical properties — including tensile strength and elasticity — are like nothing humankind has created. That’s why there’s a lot of interest among researchers in both using the material and learning from it. 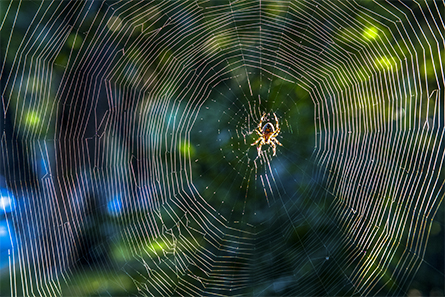 Spiders synthesize silk in a dedicated gland. The polymer building blocks — known as spidroins — can be made of thousands of amino acid residues with highly repetitive regions, including flanking globular N- and C- terminal globular domains, which regulate silk formation.

The N-terminal domain of these spider silk proteins is essential for storage and silk assembly. Researchers have scrutinized the N-terminal domains of the major and minor ampullate spidroins (MaSp and MiSp, respectively) and found them to be monomeric at neutral pH. However, at lower pHs, they dimerize to connect spidroins in a fiber.

In a recent Journal of Biological Chemistry article, Médoune Sarr and colleagues at the Karolinska Institute and colleagues from the Latvian Institute of Organic Chemistry reported the structure of the N-terminal domain of flagelliform spidroin both in solution and in crystal forms.

The authors show that it is structurally similar to the N-terminal domain of the MaSp and that protonation events affecting interaction involve specific amino acid residues different from those in MaSp NT. The authors conclude that the overall mechanism of pH-dependent dimerization is conserved, although it can be mediated by different pathways in different silk types.

Alzheimer’s disease is the most prevalent form of dementia. It affects millions of people over the age of 65 in the United States alone. It is characterized by extracellular plaques in the brain consisting of neurotoxic amyloid beta-peptides — Aβ — and intraneuronal hyperphosphorylated Tau protein aggregates.

While the production of Aβ from amyloid precursor protein, or APP, could be diminished by enhancing alpha-processing, the physical interactions between APP and α-secretases remain to be understood.

Lisa Hitschler and Thorsten Lang at the University of Bonn in Germany recently used super-resolution light microscopy to examine the abundance and association of APP and α-secretases ADAM10 and ADAM17 in cell-free plasma membranes.

They found that both secretases localize closely to APP. However, only ADAM10 co-aggregated with APP. They also identified the transmembrane domain in APP required for association with α-secretases.

The researchers propose that the APP transmembrane domain interacts either directly or indirectly with ADAM10 but not with ADAM17. They suggest this interaction could help in the development of therapies based upon promoting APP cleavage by α-secretases.

They reported their study in the Journal of Biological Chemistry.

Structure of a deadly virulence factor

Enterococcus faecalis is a nosocomial pathogen that lives in the human gastrointestinal tract and is responsible for a wide range of infections that can be life threatening. The E. faecalis N-acetylglucosaminidase AtlA plays a predominant role in cell separation.

In a zebrafish model, atlA mutants are less virulent due to a limited dissemination of bacterial chains in the host organism and a more efficient uptake by phagocytes that clear the infection. Other pathogens — including Listeria monocytogenes and Salmonella typhimurium — have structural homologs to AtlA, making it attractive to researchers interested in designing new inhibitors to bacterial pathogenesis.

In a recent paper in the Journal of Biological Chemistry, co–first authors Véronique Roig–Zamboni and Sarah Barelier, along with their colleagues in France, reported a 1.6 Å crystal structure of the E. faecalis AtlA catalytic domain. The team revealed a closed conformation of a conserved beta-hairpin and a complex network of hydrogen bonds that bring two catalytic residues to the ideal distance for an inverting mechanism. The authors suggest that this structure will inform rational drug design targeting this enterococcal virulence factor and even orthologs in other pathogens.