Alcohol-related liver disease, or ARLD, caused by chronic alcoholism is a major public health concern. An early sign of ARLD is fatty degeneration, or steatosis, which is caused by dysregulation of lipid metabolism and accumulation of lipids within the liver. 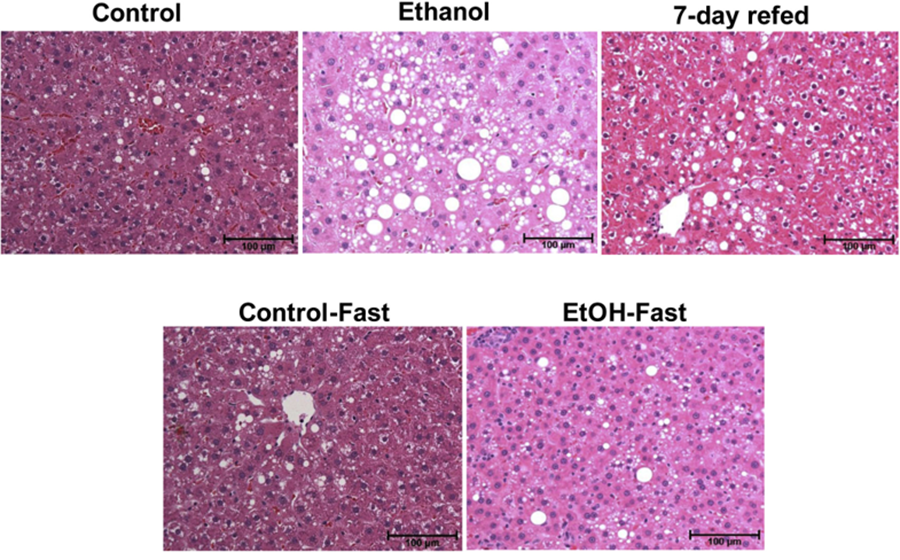 Casey et al/JLR
Lipid droplets formed under heavy alcohol consumption were shown to be attenuated by a regulated diet as well as complete fasting.

In a recent paper in the Journal of Lipid Research, Carol A. Casey and a team from the University of Nebraska and the Mayo Clinic explore the impact of chronic alcoholism on the function and composition of lipid droplets, or LDs, organelles in the liver that play a vital role in lipid metabolism and excess lipid storage. LDs consist of a phospholipid monolayer enclosing neutral lipids. This monolayer is also home to numerous proteins that regulate lipid metabolism — the LD proteome.

The researchers examined how feeding an alcohol-heavy diet to rats affected the composition of the LD proteome and whether subsequent replacement with a control diet over seven days (refeeding) or 48-hour fasting reversed the effects.

They observed that an ethanol-heavy diet led to a greater number and volume of LDs in liver sections as well as higher levels of triglycerides and nonesterified fatty acids, or NEFAs. Refeeding reversed these effects for both triglycerides and NEFAs. Fasting did so partially, albeit with NEFA levels similar to those resulting from the ethanol-fed diet.

Additionally, the levels of 388 LD proteins were altered with chronic alcohol intake, demonstrating a trend of reduced lipid utilization. For example, CIDEB, a protein known to induce LD fusion, was upregulated. This effect was reduced by both refeeding and ethanol fasting through recovering lipid utilization and mitochondrial function and reducing the levels of those proteins found to promote lipid accumulation. As Casey and the team wrote, “our data clearly support the notion that alcohol withdrawal, along with adequate nutritional support, is necessary for managing alcohol-induced liver injury.”

Preexisting conditions that increase the risk of contracting SARS-CoV-2, the virus that causes COVID-19, have been a focal point in understanding the virus. Why these conditions increase risk is not well understood. In a recent paper in the Journal of Lipid Research, James R. Hilser, Yi Han and a team from the University of Southern California, the Cleveland Clinic and UCLA explore the connection between SARS-CoV-2 infection and biomarkers linked to preexisting metabolic conditions, such as obesity or coronary artery disease. The team compared high-density lipoprotein, or HDL, cholesterol and apolipoprotein A1, or ApoA1, levels in individuals who contracted the virus with data collected prior to the pandemic.

The findings indicate a connection between increased HDL cholesterol or ApoA1 levels and reduced infection rates. In people with high levels of these biomolecules, the reduced rate was as high as 20%. Hilser, Han and their team reasoned that this is potentially tied to immune-mediating properties of HDL cholesterol, writing, “HDL-cholesterol can protect against infections by a variety of pathogens, including bacteria and parasites, and can directly bind and neutralize various DNA and RNA viruses through ApoA1-mediated inhibition of viral fusion and entry into host cells.”

The sample size in this study was, however, too small to demonstrate a genetic link between HDL cholesterol levels and COVID-19 risk.

Shining light on the cholesterol–GPCR relationship

In a new study in the Journal of Lipid Research, Laura Lemel, Katarzyna Nieścierowicz, M. Dolores García–Fernández and an international team developed an assay based on ion channel–coupled receptor technology to study the interaction between cholesterol and GPCRs. They examined the relationship in the context of the oxytocin receptor, OXTR, which mediates uterine contractions and lactation during and after pregnancy as well as playing a role in some social behaviors.

The team discovered that cholesterol and the GPCR ligand have a reciprocal relationship; ligand-bound OXTRs formed stable interactions with cholesterol even after cholesterol depletion. As the authors state, “New prospects arise for clearly identifying the binding site(s) of functional cholesterol molecules and for understanding the molecular mechanism of the dependence of OXTR on cholesterol, thanks to the possibility of selectively stabilizing the interaction of these molecules with the receptor.”