Today marks the beginning of the 21st annual National Women’s Health Week. In celebration of women and the many contributions they make every day globally, let’s take some time to engage in understanding and prioritizing their health.

Women’s health is a big tent that covers the analysis and diagnosis of all sorts of physical and emotional afflictions. Reproduction, pregnancy, childbirth and infertility, menopause, sexual, emotional, general female well-being, and many other health topics are included.

The U.S. Department of Health and Human Services’ Office of Women’s Health leads National Women’s Health Week and encourages the prioritization of both mental and physical well-being in women. 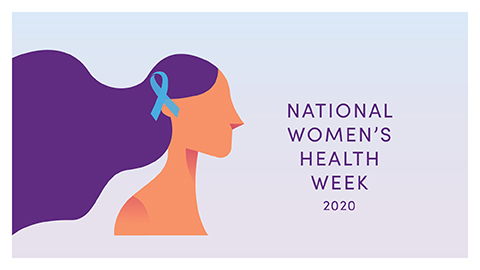 Reproductive health can be broken into many subcategories, such as gestation, menstruation, hysterectomy, chronic illness (examples include: polycystic ovary syndrome and endometriosis) and cancer. Many of these topics relate to a woman’s fitness during her reproductive years; however, menopause is also included.

Menstruation, often designated as a period, refers to the vaginal bleeding accompanying a woman’s reproductive cycle. Monthly, the female body undergoes a hormonal process to prepare the body for pregnancy. Biologically, this involves the rise and fall of hormones, release of an egg, and thickening of the uterine wall. If fertilization does not occur, the uterine lining sheds through the vagina.

Menstrual irregularities are relatively frequent, occurring in up to 25% of women in the childbearing age. Many women experience very heavy menstruation lasting for more than seven days, known as menorrhagia, which can lead to issues like anemia.

Menopause is defined as the cessation of menstruation. Often denoted as "the change of life," menopause occurs when the ovaries stop producing the hormones progesterone and estrogen, which are required for menstruation. Clinically, a woman is defined as reaching menopause when she has not menstruated for one year. There are a multitude of symptoms that accompany menopause, including hair loss, hot flashes, mood swings and vaginal dryness.

Gynecological disorders, many of which are chronic and debilitating, affect many women globally. Here I’ll highlight two: polycystic ovary syndrome and endometriosis, as these illnesses often overlap.

Polycystic ovary syndrome is common, affecting up to 10% of women of reproductive age. PCOS is caused by reproductive hormonal imbalances, leading to ovarian cysts and changes in appearance (hair loss/gain, weight loss/gain, acne, skin darkening and hirsutism). In addition to these changes, PCOS is the leading cause of infertility in women, as the condition interferes with ovulation and menstruation. Symptoms of PCOS include unusually heavy and frequent periods accompanied by extreme pain, as well as infrequent periods, and even menstruation cessation, in addition to the physical changes previously noted.

Endometriosis is another common gynecological disorder affecting about 10% of women of reproductive age. This disorder occurs when the endometrium (cells that make up the lining of the uterus) begin to grow in areas outside of the uterus, causing extremely painful periods, pain during sex, urination and bowel movements. Endometriosis was the topic of ASBMB Today’s March observance. Interestingly, both I and the author of the March observance article suffer from endometriosis, which serves as example of how common these gynecological diseases really are. I especially encourage reading that article for more information on the topic, including diagnosis, treatment and current research.

Polycystic ovary syndrome is often accompanied by hyperandrogenism, which is a condition characterized by high levels of androgens in the female body. Because androgen is a male sex hormone, the high levels often lead to changes in appearance, including increased facial hair, acne and weight gain. Previous studies on bone morphogenic protein 4 (BMP4) provided insight for potential implications in female steroidogenesis. A recent study by Liu et al. in the Journal of Biological Chemistry investigated the role of BMP4 in hyperandrogenism using a female mouse model. In that study, BMP4 was found to have a vital role in the control of sex hormone levels, offering potential insights for the management of hyperandrogenism.

There are five kinds of gynecological cancers: cervical, ovarian, uterine, vaginal and vulvar.

In 2018, the Centers for Disease Control and Prevention reported uterine cancer as the most common in the United States, with about 50,000 cases reported annually.

The second most common is ovarian. While 40 years ago cervical cancer was the leading cause of death in women, it has fallen to third most common due to research advances and screenings.

Symptoms for gynecological cancers include heavier, longer periods, as well as unusual vaginal bleeding between periods. Additional symptoms listed by the CDC include pelvic pain, pressure and bloating. For more information and ways to track symptoms, visit the CDC website.

In the Journal of Biological Chemistry, Yoo et al. reported a novel mechanism in cervical carcinoma cells. The authors showed that Cat-1, a protein with known roles in regulating cell migration and morphology, leads to aggressive cancer-associated tumor growth phenotypes, including metastasis. This is due to its association with the protein paxillin, causing disruptions in the PI3K/AKT/mTOR pathway, which is important in cell cycle regulation.

Breast cancer starts in the tissues of the breast. Most breast cancers are ductal (in the ducts that carry milk), while others are lobular (beginning in the milk glands). Less common cancers include sarcomas and lymphomas.

Canonically, breast cancer cells form tumors that present by touch or imaging as a lump. If malignant, the cancer has potential to spread through migration into the blood or lymphatic system. It is important to note not all lumps are cancerous and to always consult a physician. ASBMB Today’s October 2018 observance was Breast Cancer Awareness Month, detailing patient stories, reporting, and research.

BRCA1 is a human tumor suppressor gene found in many breast cancers and is used for early detection in breast cancer screening. In the Journal of Biological Chemistry,. Fernandes et al. provided a systematic analysis of the amino acid substitutions that occur at specified regions within mutated BRCA1, which will help researchers better understand the functional impacts of BRCA1 gene variants, including those containing missense, indels, and intronic variations, and those that pose challenges in clinical annotation.

Sexual health has to do with a woman’s well-being in relation to her participation in sexual activities. Primarily, this involves women understanding their own physical anatomy and sexual pleasure, as well as topics such as contraception, pregnancy and sexually transmitted diseases.

A woman’s desire for sexual activity can change with the various stages of her life, including early adulthood and menopause. For women, the understanding of our reproductive anatomy as well as our emotional state are both important with regards to sexual enjoyment. Planned Parenthood provides in-depth explanations of the female reproductive anatomy, both internal and external, using informative videos and resources. Additionally, the Mayo Clinic addresses ways to incorporate sexual health and one’s personal needs into conversations with your partner.

Although men and women are diagnosed at equal rates for STIs, women more commonly suffer the long-term health effects.

Anatomically, the vagina is covered with tissue that is thinner and more delicate than the skin of male genitalia, which makes it more vulnerable to bacterial and viral infections.

In addition to being more susceptible to infection, women are less likely to present STI symptoms, and often do not recognize them as such amid normal vaginal excretions and reactions to irritation. Untreated STIs can lead to pelvic inflammatory disease, an infection of multiple female reproductive organs (uterus, ovaries, fallopian tubes). PID can lead to pregnancy complications and even infertility.

Bacterial vaginosis is the most common vaginal infection. It occurs when there is overgrowth of one or more naturally occurring bacteria. In the Journal of Biological Chemistry, Robinson et al. investigated Gardnerella vaginalis, the dominant species of bacteria known to overgrow in cases of bacterial vaginosis. The researchers profiled the potential sialidase domains in G. vaginalis and their broad activity against both synthetic and mucosal glycoproteins relative to the environment seen in humans.

In addition to the reproductive and sexual aspects to a women’s well-being, it is important to note that the general health of women can also differ from that of men.