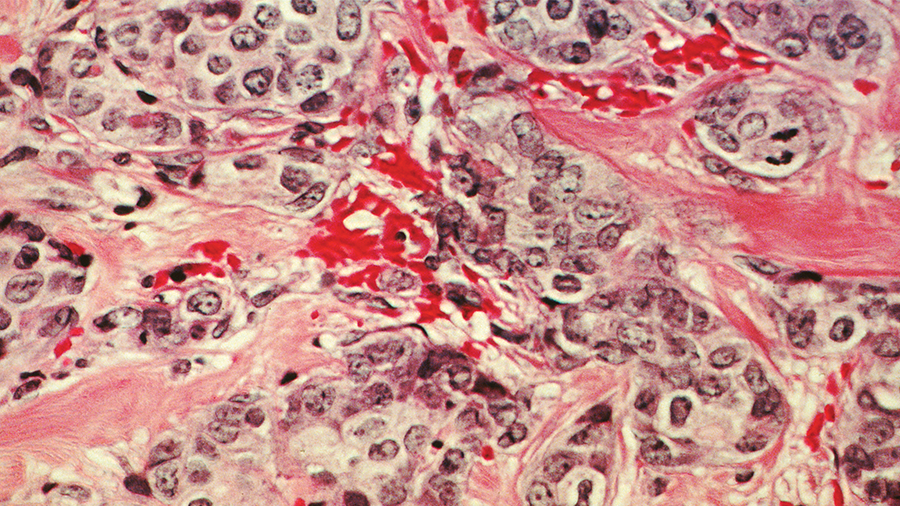 Science prepared me for cancer treatments, but nothing prepared me for surviving’: Jennifer Gooch, a medical writer and adjunct associate professor at Emory University School of Medicine, writes about her experience with breast cancer.

Disappointed — by cancer: In this award-winning essay, biochemist Jennifer DuBois reacts to her breast cancer diagnosis and treatment with professional dismay.

Bridging the gap between research and treatment: As she and her loved ones receive multiple cancer diagnoses, medical researcher Michelle Gunz has learned to be an educated advocate for the best possible treatment, pushing clinicians to think outside the box -- https://www.asbmb.org/asbmbtoday/201805/Perspective/Gumz/

Addressing the tangled roots of health disparities: The disparity between breast cancer survival rates in black and white women has widened in recent years, despite decreases for both groups. Learn more about this health disparity and others in this ASBMB Today cover story by science writer John Arnst.

Protecting kidneys from chemo: In pursuit of more effective cancer treatment, researchers have uncovered how the kidneys protect themselves or recover from chemotherapy-induced damage. These results of their study are a significant step toward improving long-term cancer patient outcomes. Read the ASBMB Today story.Read the Journal of Lipid Research paper.

‘A plausible therapeutic target for metastatic breast cancer’: Cancer can result when normal cellular processes go wrong at any of a number of different points. Researchers at Virginia Commonwealth University examined a case when cancer results from misregulated alternative splicing of RNA. The translational regulator CPEB2 has two isoforms derived by alternative splicing; one of these isoforms is upregulated in aggressive metastatic breast cancers. When each of the two isoforms was downregulated in triple-negative breast cancer cells, they had opposite effects on pathways involved in epithelial-to-mesenchymal transition and hypoxic response. The cancer-associated isoform enhanced the translation of previously cancer-implicated transcription factors.

Sussing out the function of a cancer-linked chromosome region: One region of chromosome 8 is frequently deleted in breast cancers. This led researchers to name a gene in that region “Deleted in Breast Cancer 1,” or DBC1 for short, and investigate its tumor-suppressive function. In this 2016 article in the journal Molecular & Cellular Proteomics, scientists established the first interaction network showing how DCP1 interacts with the other proteins in human cells. They found a new function for the protein in regulating circadian rhythm. Learn more here. (Side note: DBC1 has since been renamed “Cell Cycle and Apoptosis Regulator Protein 2,” or CCAR2.)

JLR A lipid linked to cancer severity: Signaling by a lipid called lysophosphatidate, or LPA, is linked to cancer progression and metastasis, and can make cancer cells resistant to the breast cancer drug Taxol. A review article from the Journal of Lipid Research introduced readers to our understanding of LPA signaling as of 2015.

Reducing a lipid linked to cancer severity: The following year, scientists reported in the Journal of Lipid Research that mice treated with tetracycline antibiotics, such as doxycycline, were better able to reduce the metastasis-linked lipid. Four clinical trials testing doxycycline for breast cancer patients are in progress.

Thwarting triple-negative breast cancer: The antipsychotic drug thioridazine also kills cancer cells. Researchers at the University of North Carolina investigated the mechanism of this effect and found that the drug prevented some, but not all, lines of triple-negative breast cancer cells from forming tumors. They reported their results in the Journal of Biological Chemistry.

Testing targets of new cancer drugs: To make sure a drug candidate that kills cancer cells in a dish is safe to use in patients — after all, rat poison also kills cells in a dish — researchers need to know which proteins in the cell the compound targets. In this paper in the journal Molecular & Cellular Proteomics, researchers report that they developed an analytical approach to find the targets of new candidate drugs. Testing it on the well-studied breast cancer drug tamoxifen helped them refine the approach, which they hope will be useful for understanding future drugs.

How to predict cancer recurrence: Metastasis, or growth of cancer cells far from the primary tumor, is a leading cause of death in breast cancer. After chemotherapy, tiny metastases can go dormant, sometimes for years. A high proportion of breast cancer recurrence and mortality happen when tiny mestastases reawaken and begin to grow. In this paper in the journal Molecular & Cellular Proteomics, researchers established a tissue-growth system to model dormant cancer cells in the liver and used it to search for biomarkers that might give doctors an early hint that micro-metastases are waking back up.

The keto diet and cancer: The high-fat and very-low-carb ketogenic diet lowers glucose and increases ketone bodies. Studies using animal models and certain clinical trials have shown that the keto diet, as it’s more popularly known, can have anti-tumor effects. A study in the Journal of Lipid Research reports that low ketolytic enzyme levels in tumors predict ketogenic diet responses in cancer cell lines in vitro and in vivo. Read the paper.

Targeting troublesome chaperone protein: Many aggressive tumors have an overabundance of the chaperone Hsp70, which is thought to stabilize proteins that promote tumor growth. Until recently, not much was known about the identities of Hsp70’s clients, hindering efforts to develop drugs targeting Hsp70 against conditions like breast cancer. A study published in the Journal of Biological Chemistry showed that Hsp70 stabilizes two proteins that inhibit apoptosis, or programmed cell death, in breast cancer cell lines. Monitoring the levels of these client proteins will allow researchers to develop drugs to target Hsp70.