Transgelin is an actin-binding protein that promotes motility in cells. What role does it play in lipid metabolism?

People with familial hypercholesterolemia, or FH, have very high levels of low-density lipoprotein cholesterol circulating in their blood due to aberrant LDL uptake by cells. With LDL levels elevated for prolonged periods, these patients are at increased risk for atherosclerotic cardiovascular disease. 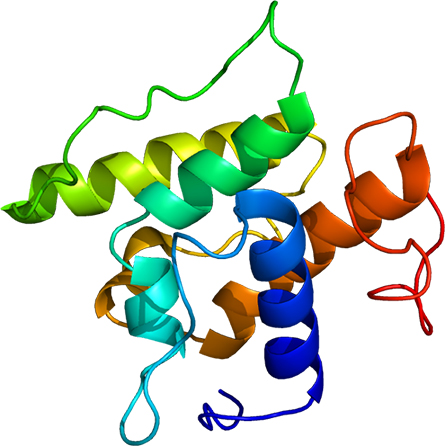 Emw/Wikimedia Commons
Transgelin is a protein that in humans is encoded by the TAGLN gene.

“Mutations in several genes have been identified as contributors of FH,” Diego Lucero, a research fellow at the National Institutes of Health, explained. “However, a genetic link is still unidentified in about 20% to 40% of FH patients. This makes diagnosis and drug therapy design more challenging.”

Through genomewide CRISPR–Cas9 knockout screening, Lucero used 76,441 sgRNAs to knock out 19,114 genes in Cas9-expressing HepG2 liver cells. sgRNA-transduced cells then were incubated with fluorescently labeled LDL and sorted for LDL uptake through flow cytometry. He collected cells with 5% or lower LDL uptake and deep sequenced them to determine sgRNA representation.

“If a gene influenced LDL uptake, its sgRNAs would feature among the most enriched in the deep sequencing,” Lucero said.

By studying sgRNA enrichment in his cell populations, Lucero identified 15 genes that influenced LDL uptake. He then generated HepG2 cell lines with these 15 candidate genes removed, and he remeasured LDL uptake in these cells.

“As expected, knockout of the LDLR gene showed the most robust reduction (about 80%) in cellular LDL uptake,” said Lucero. “We also observed consistent reductions in LDL uptake in three other novel genes.”

One of the three was transgelin.

Lucero worked with collaborators at the Mayo Clinic to validate the gene hits through the Global Lipids Genetics Consortium and lipid-related phenotypes available in UK Biobank. They found that differences in transgelin expression in human populations were associated strongly with elevated plasma lipids (triglycerides, total cholesterol and LDL cholesterol), making transgelin a target for further investigation. However, transgelin is an actin-binding protein that promotes motility in cells. What role does it play in lipid metabolism?

“In transgelin knockout cells, we found a universal 30% reduction in uptake of LDL, very low-density lipoprotein and transferrin,” Lucero said. “This led us to believe that transgelin affects something common between these cargos.”

These findings recently were published in the Journal of Lipid Research. Lucero plans to continue this project using mice that are genetically modified to lack transgelin.

“We are also studying other proteins besides transgelin that might be involved in the uptake of LDL,” he said. “While this study focused on genes that reduce LDL uptake, we have also identified those that increase LDL uptake. This is an exciting direction because these might be therapeutic targets that could reduce cholesterol in blood.”