ASBMB Today Science How is myelin made?
Journal News

How is myelin made?

Understanding the protective coating on neurons may inform future therapies

Myelin is the protective lipid sheath wrapped around a nerve. It functions as an insulator, akin to the protective coating on a wire, speeding up electrical transmission of signals along a neuron. Myelin also plays a role in maintaining the health of neurons. Myelin function is dysregulated in many neurological disorders, including multiple sclerosis. 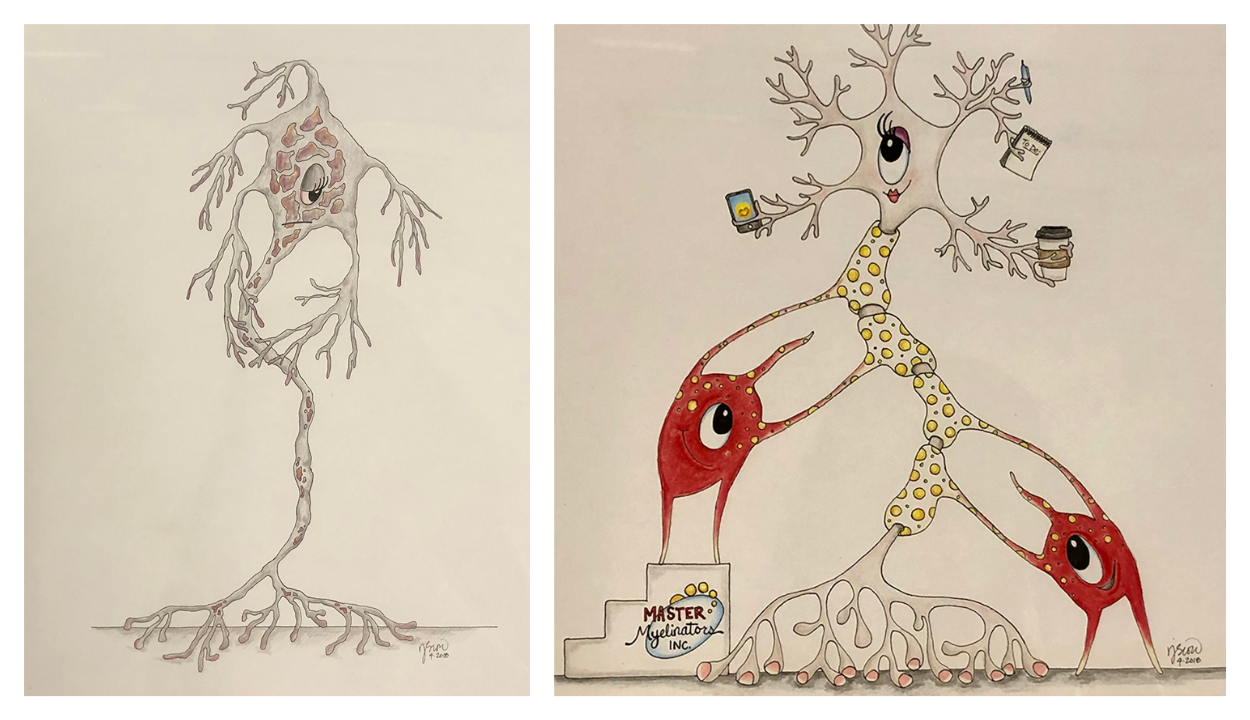 Jennifer Siow
This artist’s rendition, created by the first author's daughter, shows neurons with (right) and without (left) a myelin sheath. The neuron with a myelin sheath functions at full capacity, while a neuron without myelin is unhealthy. Oligodendrocytes are depicted in red.

Oligodendrocytes are the myelin-producing cells of the central nervous system. The myelin sheath around a neuron is part of an oligodendrocyte’s plasma membrane, and a single oligodendrocyte can myelinate as many as 50 neurons. During myelination, an oligodendrocyte stretches out tubes of membrane in search of a neuron. When it finds one, it sends the necessary building materials down the tubes and, still operating from a distance, assembles a myelin sheet around the neuron: Composition, number of wraps and total coverage all matter. A myelinated neuron that loses its coating cannot transmit electrical signals properly, leading to loss of muscle control and other neurological problems.

The myelin sheath is mostly made of lipids, including sphingolipids, which are critical to myelin’s structure and function. The enzyme serine palymitoyltransferase, or SPT, produces the backbone of all sphingolipids, and the membrane-bound protein ORMDL monitors sphingolipid levels and regulates SPT activity. ORMDL’s activity must be precise: Too little sphingolipid production impedes myelination, and too much can be toxic.

Binks Wattenberg, a professor of biochemistry and molecular biology at Virginia Commonwealth University, studies membrane biogenesis and now focuses on lipid biogenesis. “I am very curious about how the cell knows when to make sphingolipid and when to stop,” Wattenberg said. “I think ORMDL might be the key to answering that question.”

Wattenberg’s next-door lab neighbor, Carmen Sato–Bigbee, a professor in the same department, studies myelination, with a focus on oligodendrocytes. The two joined forces to study the role of sphingolipid biosynthesis in myelination in developing brains, and reported their results in the Journal of Lipid Research.

To uncover the dynamics of sphingolipid content and synthesis during myelination, Wattenberg and Sato–Bigbee’s team worked with newborn rat brains, because peak myelination occurs directly after birth. Only one in five cells in the brain is an oligodendrocyte, so the team isolated these myelin-producing cells for their experiments.

The study also found that SPT activity increases for the first few days of myelination and then begins to decrease. ORMDL activity is not measurable, but the team deduced that ORMDL isoform expression varies over time. These findings pave the way for future experiments.