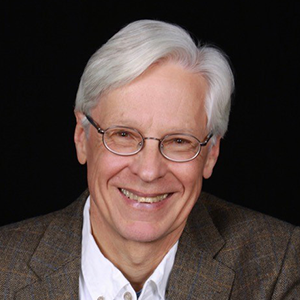 For more than 20 years, his team and others around the world had been chasing an elusive quarry – the 3D structure of a crucial signaling protein in cells. In late 2021, his electron microscope images of the molecule started to come into focus. On December 8, postdoc Naotaka Tsutsumi and graduate student Caleb Glassman sent him an email with a startlingly clear picture of the protein latched on to a key receptor. “I was sitting in a meeting, and I realized we had it,” recalls Garcia, a Howard Hughes Medical Institute Investigator at Stanford University. “I immediately left the meeting and ran back to the lab.” 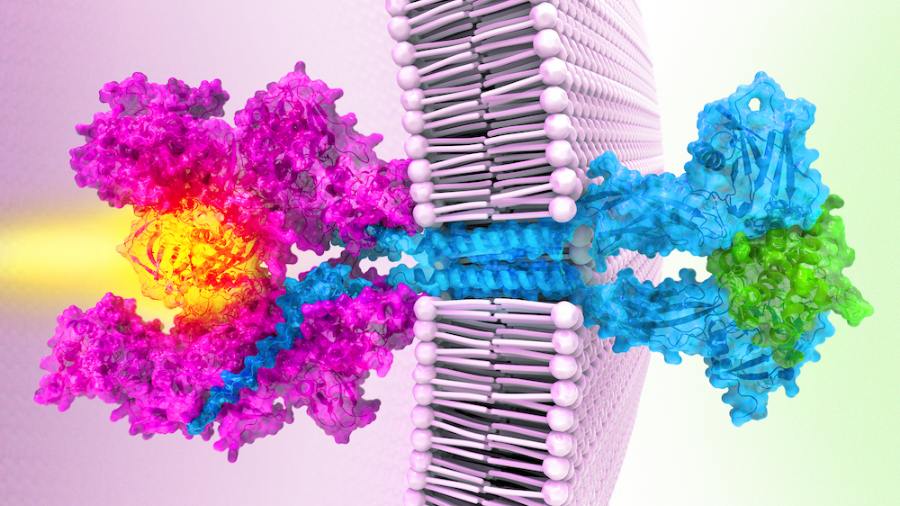 Eric Smith/Chris Garcia/HHMI
When a cytokine (green) binds to receptors (teal), two parts of the Janus kinase protein (pink) come together, activating it to send signals inside a cell. In some cancers, mutations in the kinase lock it together, keeping it abnormally active.

Glassman, who had just moved to Boston for a Harvard postdoc, canceled his planned backcountry trip, and rushed back to Stanford. “I wanted to finish what Naotaka and I had started,” he explains. Then the three researchers worked around the clock to nail the complete structure of the protein, known as a Janus kinase, and beat competing labs to the discovery. “It was a big horse race between many great groups worldwide, and we were sprinting towards the finish line,” Garcia says. On December 26, they rushed a manuscript to the journal Science, which published the work on March 10, 2022.

Garcia’s team has nabbed not just the full structure of a vitally important signaling molecule, but also the mechanism for how these kinases work, which had been “a fundamental question in biology,” says John O’Shea, an immunologist at the National Institutes of Health who helped to develop one of the first drugs to block Janus kinase function and was not involved with the new research. Because the proteins can go awry in disease, the results could lead to new and better drugs against certain cancers. “It’s amazing work,” O’Shea says.

Janus kinases are one of the communication whizzes of the animal kingdom. They take signals that come from outside cells and pass the info along to molecules inside. Scientists have known for years that malfunctioning Janus kinases can cause disease. Some mutations that impair Janus kinases can severely curtail the body’s ability to fight off infection, causing a condition virtually identical to “bubble boy disease.” And when genetic glitches and exaggerated signals rev up the kinases too much, the result can be blood cancers like leukemia, and allergic or autoimmune diseases.

Researchers knew the shape of parts of the proteins, including related enzyme and regulatory regions at the end of the molecule, which earned them the name Janus kinases, after the two-faced mythological Roman god. And sophisticated drug screens have unearthed molecules that inhibit these proteins, giving doctors a way to treat some cancers and disorders like rheumatoid arthritis. But scientists developed the drugs without knowing the molecules’ full structure or how they become activated. So most of the current arsenal of nearly a dozen drugs, plus more in clinical trials, are relatively blunt instruments, blocking both healthy and mutated Janus kinases. They can still treat many diseases, from eczema to COVID-19, but also can cause a range of side effects.

Garcia wanted a more detailed view of the proteins but, as he learned when he first tried to image the molecules as a postdoc in 1995, it was a daunting challenge. The kinases are notoriously difficult to make in the lab. And they don’t easily form crystals, which scientists need to capture 3D structures using x-ray crystallography. So, for many years, Garcia and others could only view bits of the kinases at a time. “We kept chipping away without much to show for it,” he says.

In the last few years, the pieces began to fall into place. One key advance was a method called cryo-EM, where scientists freeze samples and then view them using an electron microscope. Another was the choice by Garcia’s team to study a mouse Janus kinase rather than a less stable human one. They also introduced a common cancer-causing mutation into the mouse kinase, which stabilized the molecule even further.

Garcia’s team’s work reveals the structure of a Janus kinase called JAK1 and outlines the steps it uses to sends signals within cells.

First, receptor proteins stud cell membranes, poking from the inner and outer surfaces of the cell like a toothpick through a sandwich. Then, a single Janus kinase inside the cell attaches to the receptors, waiting for a signal. Next, molecules called cytokines approach the cell’s exterior, each binding to two receptors. The cytokines act like a bridge that pulls the two receptors even closer, Garcia explains. That brings the active ends of the Janus kinase together, switching them on. Like a match lighting a fire, the kinase relays a signal that tells genes to turn on or off.

The structure also reveals how the cancer-causing mutation short-circuits this messaging chain – by gluing two parts of the Janus kinase together. That causes the two active regions to stay switched on even when there are no outside cytokines, sparking uncontrolled activity that can trigger cancers.

Garcia hopes the new results could help scientists design better drugs that target only defective Janus kinases, allowing healthy versions to keep performing their normal duties. The work, he says, is an example of an “ideal situation in science, where solving a basic problem also has direct relevance for disease.”

This article originally appeared in HHMI News and was republished with permission. The Howard Hughes Medical Institute is the nation’s largest private supporter of academic biomedical research. You can read more stories about our scientists and programs at HHMI News.

John Carey is a freelance writer in the Washington, D.C., area.