There's more to cholesterol than meets the eye

Glaucoma sometimes is called the silent thief in the night, because the eye can be damaged irreversibly before a person experiences any vision loss.

In a healthy eye, tissue called trabecular meshwork controls pressure by draining aqueous humor, the clear fluid filling the space between the cornea and lens. This drainage system clogs up in glaucoma, fluid builds up and the resulting pressure damages the optic nerve that sends visual signals to the brain. In severe cases, the eyes can bulge out. 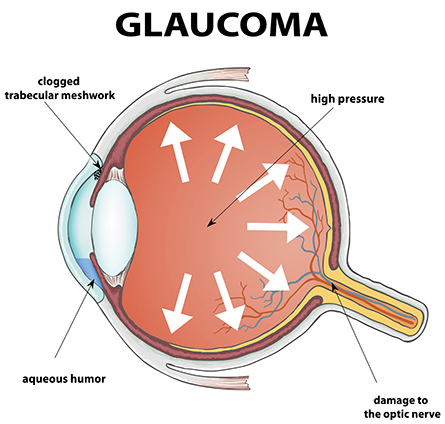 Glaucoma damages the optic nerve and is a primary cause of irreversible blindness.

Understanding how trabecular meshwork cells sense and respond to elevated eye pressure — a type of mechanical stress — is a major goal of researchers in David Križaj’s laboratory at the University of Utah. They study a mechanotransducer, a protein that senses and responds to mechanical stress, called transient receptor potential vanilloid 4, or TRPV4. When activated in trabecular meshwork, TRPV4 promotes aqueous humor drainage.

Previously, the researchers reported that a known risk factor for glaucoma, cholesterol, activates TRPV4 in retinal glia cells, which are at the back of the eye. Now, in a recent article published in the Journal of Lipid Research, Monika Lakk and colleagues report that cholesterol depletion activates TRPV4 in trabecular meshwork cells at the front of the eye — an unexpected result.

“Cholesterol has been public enemy No. 1 in the eye of the public for a long time due to its dysregulation in cardiovascular, neurologic and metabolic disease, and has been shown to subserve multiple types of inherited and acquired vision loss,” Lakk said.

On the other hand, cholesterol plays a crucial role in maintaining homeostasis. The finding that cholesterol regulates TRPV4 in opposite ways depending on its location (front versus back of the eye) demonstrates this complexity. “Clinical solutions may require a thorough understanding of the local biomechanical and cellular context,” Lakk said.

According to the researchers, increased membrane cholesterol in trabecular meshwork cells may dampen the mechanical stress signals caused by high blood pressure and prevent overstimulation of TRPV4 — a protective mechanism that may become dysfunctional in glaucoma.

By just stretching the trabecular meshwork cells — simulating what happens with glaucoma — the researchers were able to deplete membrane cholesterol, which activates TRPV4.

“This study was an exercise in surprise,” Lakk said. “We were completely unprepared for the finding that membrane lipid composition itself is a function of the biomechanical milieu.”

When a person experiences chronic stress due to conditions such as heart disease and glaucoma, she explained, “The cellular remodeling that takes place may involve the entire body and a myriad of processes and mechanisms that may flow under the radar of investigators focusing on immediate targets.”

The researchers have knocked out the TRPV4 gene in multiple eye cell types in mice and are investigating how these cells, which are unable to sense and respond to mechanical stress, affect eye fluid pressure and vision. Since cholesterol can turn TRPV4 on or off in different parts of the eye, their research suggests that glaucoma patients may benefit from carefully balanced diet regimens.

Sarah May is a scientific writer at the University of Chicago.