Chain length and malarial infection. Diet supplements and fatty liver disease. Effects of a lesser-known synuclein. Read about recent papers on these topics published in the Journal of Biological Chemistry. 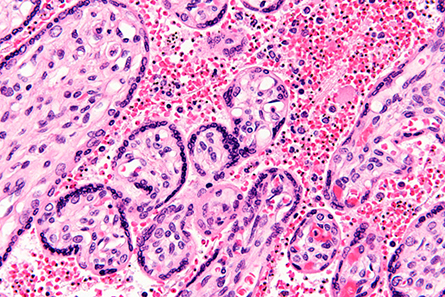 Nephron/Wikimedia Commons
Pregnant women are particularly susceptible to the parasite variant of malaria, shown
within red blood cells in this stained high-magnification micrograph, that targets
the placenta.

Malaria kills hundreds of thousands of people every year, and most of these deaths are caused by the parasite Plasmodium falciparum,which binds to blood cells, allowing it to remain in the vasculature and escape immune clearance in the spleen. Pregnant women are particularly susceptible to a serologically distinct parasite variant that targets the placenta. Placental malaria is mediated by the protein VAR2CSA interacting with the placental glycosaminoglycan chondroitin sulfate, or CS.

Previously, researchers had identified a shared type of oncofetal chondroitin sulfate, or ofCS, that is common to placenta and tumors, but scientists still lack a clear understanding of its structure and selectivity to VAR2CSA. In a study recently published in the Journal of Biological Chemistry, Charlotte B. Spliid of the University of California, San Diego, and Copenhagen University Hospital, Denmark, and an international teamperformed structural analysis of ofCS and found that both placenta- and tumor-derived ofCS had high N-acetylgalactosamine 4-O-sulfation levels.

The researchers showed that both tissues had more chondroitin sulfate moieties of higher molecular weight than other tissues, concurrent with chondroitin polymerization proteins being upregulated in most cancer types. CRISPR/Cas9 targeting of these proteins showed a reduction in cell-surface chondroitin molecular weight, which reduced the binding to recombinant VAR2, or rVAR2.

Finally, the researchers showed that rVAR2 binding is dependent on the length of the chondroitin sulfate chains. They concluded that the amount and accessibility of CS chains affect rVAR2 binding and, in doing so, malaria infection.

Nonalcoholic fatty liver disease, or NAFLD, is a set of diseases involving fat accumulation and inflammation of the liver that affect almost a quarter of the U.S. population.

Low hepatic nicotinamide adenine dinucleotide, or NAD+, levels previously have been associated with NAFLD. In a recent article in the Journal of Biological Chemistry, Morten Dall, Anna Hassing and a team at the University of Copenhagen describe how they determined that removing hepatic nicotinamide phosphoribosyltransferase, or NAMPT, the enzyme responsible for NAD+ formation, increases susceptibility to liver injury in diet-induced metabolic stress.

The authors concluded that “HNKO livers have reduced respiratory capacity, decreased abundance of mitochondrial proteins, and are susceptible to fibrosis due to low NAD+ levels.” They suggest that NAD+ precursor supplementation in the diet could prevent liver injury and NAFLD progression.

Effects of a lesser-known synuclein

Synucleins are a family of three proteins highly expressed in neurons involved in Parkinson’s and certain other neurodegenerative diseases. While the role of alpha-synuclein as a modulator of various mechanisms implicated in chemical neurotransmission is well known, researchers know less about the other family members, beta-synuclein and gamma-synuclein.

In research recently published in the Journal of Biological Chemistry, Natalia Ninkina, Steven J. Millership and Owen M. Peters of Cardiff University and a team in the U.K. aimed to decipher the role β-synuclein plays in uptake of the neurotransmitter dopamine. They first showed that the sole presence of this protein improves dopamine uptake in triple-negative striatal vesicles.

The authors also showed that the presence of β-synuclein increased resistance to subchronic administration of the Parkinson’s disease–inducing prodrug 1-methyl-4-phenyl-1,2,3,6-tetrahydropyridine, or MPTP, in dopaminergic neurons of the substantia nigra pars compacta when one or both of the other synucleins are absent. Additional proteomics analyses showed different protein compositions in synuclein-deficient synaptic vesicles versus those containing only β-synuclein.

The authors suggest that the increase in dopamine uptake by β-synuclein may be due to a change in protein architecture of synaptic vesicles, which leads to increased resistance to an MPTP toxic metabolite in dopaminergic neurons.