Flipping the switch for competence

Bacteria can put in place different paths to transfer genetic material. Horizontal gene transfer, moving genetic material between organisms other than from parents to offspring, is essential for bacteria to survive in challenging environments. In pathogenic bacteria, such as streptococci, the ability to uptake external DNA — known as competence — allows them to get new genetic material that has been associated with gain of virulence-related mechanisms and multidrug resistance. 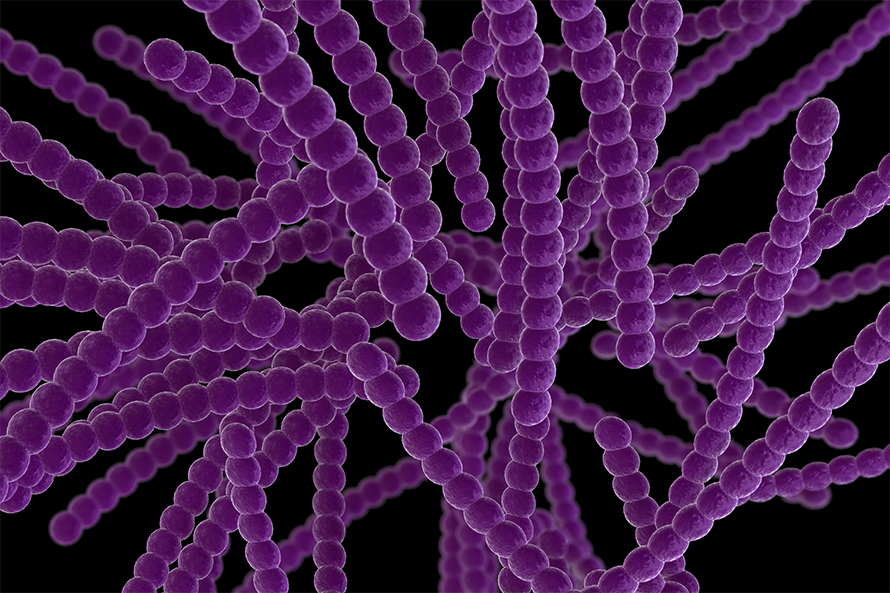 In streptococci, competence is tightly regulated by the competence stimulating signaling system, or ComRS, that is activated by the ComR sensor and the SigX-inducing peptide, or XIP, pheromone. A better understanding of how this system is activated provides insights to identify potential targets for drug development and other biomedical purposes, as Laura Ledesma–García of the Louvain Institute of Biomolecular Science and Technology and colleagues describe in a recent article in the Journal of Biological Chemistry.

The group proposes a model for ComR activation based on two major conformational changes of the XIP-binding domain. Using a semirational mutagenesis approach, they first identified two residues within XIP that increase ComR sensor activation by interacting with two aromatic residues of its XIP-binding pocket. Then, using random and targeted mutagenesis of ComR, they determined that the interplay among these four residues remodels a network of aromatic–aromatic interactions involved in relaxing the sequestration of the DNA-binding domain, flipping the switch on for competence.

Stabilizing enzymes in the liver

The liver is the organ in charge of breaking down toxic foreign molecules and metabolizing drugs in mammals. The main enzymes involved in these processes are heme-containing monooxygenases cytochrome P450, or CYP450s. These enzymes accumulate primarily in the liver and have a characteristic catalytic cycle dependent on protein–protein interactions with oxidoreductases. In previous work, Meredith McGuire and a team at Johns Hopkins University had shown that progesterone receptor membrane component 1, or PGRMC1, a heme-binding protein, binds to CYP450s in yeast and mammalian cells and supports their activity. However, the researchers did not yet know the extent of PGRMC1 function in CYP450 biology and whether PGRMC1 is also a heme chaperone.

In a recent article in the Journal of Biological Chemistry, the authors write that in studying livers of mice that had the Pgrmc1 gene removed, they found that PGRMC1 binds and stabilizes a broad range of CYP450s in a heme-independent manner and that PGRMC1 supports maintenance of CYP450 protein levels post-transcriptionally. In addition, the mouse livers exhibited reduced CYP450 activity consistent with reduced enzyme levels. The researchers also show that PGRMC1 stabilizes CYP450s and that binding and stabilization do not require PGRMC1 binding to heme. Moreover, PGRMC1-dependent stabilization of CYP450s is physiologically relevant, as Pgrmc1 deletion protected the mice from acetaminophen-induced liver injury.

Diterpenoids are an extensive family of natural products produced by plants. Within this family, ent-kauranes are involved in many aspects of plant growth and protection from feeding insects. When ingested by humans, these compounds have anti-inflammatory, hypoglycemic and anti-viral properties.

The SARS-Cov-2 pandemic is driving drug development aimed at identifying new antiviral compounds that target coronaviral proteins. Research performed in previous epidemics identified enzymatic nonstructural proteins, or NSPs, involved in viral replication inside host cells. Nsp9 is a conserved essential replicase, and researchers are looking for compounds that interfere with its activity.

A recent article in the Journal of Biological Chemistry describes how Dene Littler at Monash University and collaborators used a native mass spectrometry–based approach toscreen a natural product library for compounds that bind Nsp9. They found that the ent-kaurane oridonin binds to purified SARS-CoV-2 Nsp9 with micromolar affinities. They also determined the crystal structure of the Nsp9–oridonin complex and showed that oridonin binds Nsp9 through a conserved domain.

Oridonin reduces Nsp9’s ability to act as a substrate for Nsp12, an essential RNA-dependent RNA polymerase. The authors also show that oridonin has broad antiviral activity, reducing viral titer after infection with either SARS-CoV-2 or, to a lesser extent, MERS-CoV in cellular assays in the lab.