Edmond H. Fischer, widely known as Eddy, an emeritus professor at the University of Washington School of Medicine in Seattle, died in late August. He was 101 years old and, at the time of his death, the world’s oldest Nobel laureate, renowned for his foundational work on enzyme regulation through reversible phosphorylation. 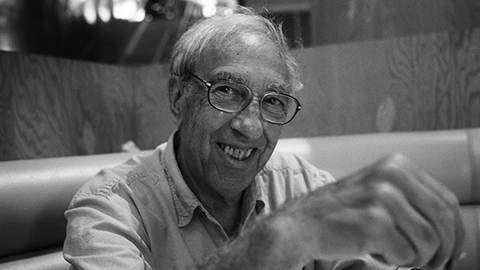 Born in Shanghai in 1920 to European expatriates, Fischer attended boarding school in Switzerland from the age of 7 onward. He studied biology and chemistry at the University of Geneva during World War II, graduating in 1943, and continued as a doctoral student with Kurt Meyer, the head of the university's organic chemistry department. The lab was focused on the structure of complex polysaccharides such as starch and glycogen; as a doctoral student, Fischer conducted enzymology research on proteins involved in polysaccharide breakdown, focusing on amylase. He earned his Ph.D. in 1947.

Fischer continued to work with Meyer in Geneva until 1953, when Meyer's sudden death coincided with Fischer’s receipt of an immigration visa to the United States. He arrived in the country intending to work as a postdoctoral fellow at Caltech, but received a number of job offers from American universities and instead joined the faculty at the University of Washington as an assistant professor. Part of the decision, he later said, was because Seattle's mountains and lakes reminded him and his wife, Nelly Gagnaux, of Switzerland. Gagneaux died young, in 1961; Fischer later remarried the American Beverly Bullock, who died in 2006.

At Washington, Fischer met Edwin Krebs, who would become a lifelong friend and collaborator. The two began to investigate the role of enzyme cofactor adenosine monophosphate in the activity of a phosphatase that regulates the breakdown of glycogen in muscle cells to supply glucose. While trying to understand why some purified forms of the enzyme were active and others inactive, they found, unexpectedly, that phosphorylation and dephosphorylation of the kinase itself regulate its activity. They published a series of articles on this line of inquiry in the Journal of Biological Chemistry. 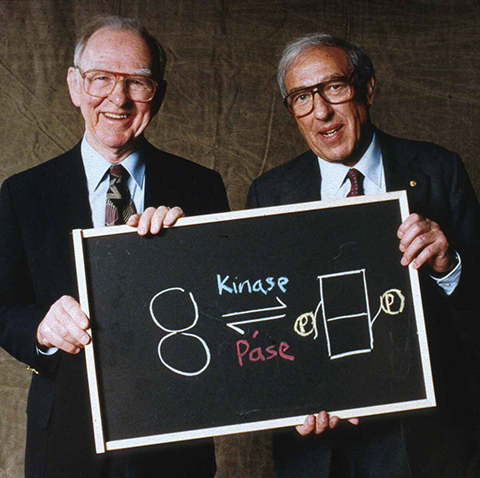 Edwin G. Krebs and Edmond H. Fischer shared the 1992 Nobel prize in physiology or medicine. In Fischer's Nobel banquet speech, he quipped that "two 'Eds' are better than one." Read a Journal of Biological Chemistry Classic about their work.

"These were very exciting years when just about every experiment revealed something new and unexpected,” Fischer wrote in his Nobel biography. “We worked so closely together that whenever one of us had to leave the laboratory in the middle of an experiment, the other would carry on without a word of explanation."

The pair shared the 1992 Nobel Prize in physiology or medicine for the work, which established the importance of reversible protein phosphorylation to regulation of enzyme activity and other biological processes. In a JBC remembrance of Krebs after his 2009 death, Fischer wrote, "We often have been asked whether we realized, at the beginning, that we were dealing with a ubiquitous and, therefore, very fundamental process. Absolutely not. We stayed with this system because we felt it was an exciting and obviously important one, but we could never have predicted the incredible developments that were to follow."

Throughout his career, Fischer continued to work on the role of reversible protein phosphorylation in various signal-transduction pathways, helping to sketch the widespread importance of this reaction. His lab extensively characterized glycogen synthesis, which is important in metabolism; they also studied mitogen-activated protein kinases, or MAPKs, and signal transduction cascades involved in B and T cell activation. Fischer achieved full professorship in 1961 and continued at the University of Washington until his retirement in 1990.

Friends and colleagues on social media recalled Fischer’s courtesy and sense of humor — qualities typified by remarks he made at a Stockholm banquet when he and Krebs received the Nobel Prize. Remarking on his pride in their students, Fischer said, “We owe our success to them, and also to the fact that, as the saying goes, two ‘Eds’ are better than one.”

In later years, Fischer volunteered with other organizations, serving on the board of directors of the Vallee Foundation, a scientific philanthropy, and as honorary president of the World Cultural Council from 2007 to 2014. He was a lifelong music lover; having been admitted as a young man to the Geneva Conservatory of Music, he considered pursuing piano professionally but later wrote that he concluded it was "better to keep music purely for pleasure." His most recent public piano performance was just this June at a virtual Lindau meeting. He also learned to fly an airplane.

In honor of Fischer's 100th birthday in April 2020, the department of biochemistry at the University of Washington threw a virtual seminar last October. It was attended by many of Fischer's former advisees and mentees and also by his granddaughter Elyse Fischer, a doctoral student in structural biology at the University of Cambridge. “Eddy gave me my love for science, research and discovery,” the younger Fischer tweeted. “He always supported my career as a scientist even before I knew I’d become one.”

Fischer is survived by his two sons and stepdaughter and three other grandchildren.

You can read more about Fischer's seminal scientific contributions in a JBC Classic article.