A competition between students at the University of California, Davis and at University College Dublin, Ireland, is being launched in memory of plant biochemist Eric Conn, a UC Davis professor of molecular and cellular biology and a member of the American Society for Biochemistry and Molecular Biology from 1952 until his death in 2017.

UCDavis
Eric Conn served on the UC Davis faculty for 43 years and was world-renowned for his contributions to the understanding of plant metabolism.

Sixty UC Davis undergraduates participated in the preliminary round called the Eric Conn Biochemistry Quizzes, held on Zoom. Between 10 and 15 of them will be selected to compete in the finals, depending on responses from UC Dublin.

The first-round Conn Quizzes included questions about fundamental biochemistry, and the final games will focus on protein structures, including two proteins related to the SARS-CoV-2 virus that causes COVID-19, according to organizer Walter Leal, a UC Davis distinguished professor.

Eric Conn served on the UC Davis faculty for 43 years and was world-renowned for his contributions to the understanding of plant metabolism. He organized the university’s introductory course in biochemistry in 1959 and taught it until he retired in 1993.

A member of the National Academy of Sciences, Conn received the UC Davis Academic Senate’s highest honor, the Faculty Research Lecturer Award, in 1977, and was the third recipient of the UC Davis Prize for Teaching and Scholarly Achievement. “He strongly believed that a university professor should excel in both research and teaching,” Leal told the Davis Enterprise.

UC Davis and UC Dublin are both global research universities, with 39,000 and 33,000 students, respectively.

Kurt Ebner, who chaired the biochemistry and molecular biology department at the University of Kansas Medical Center for two decades, died Jan. 29 in Overland Park, Kansas. He was 89. 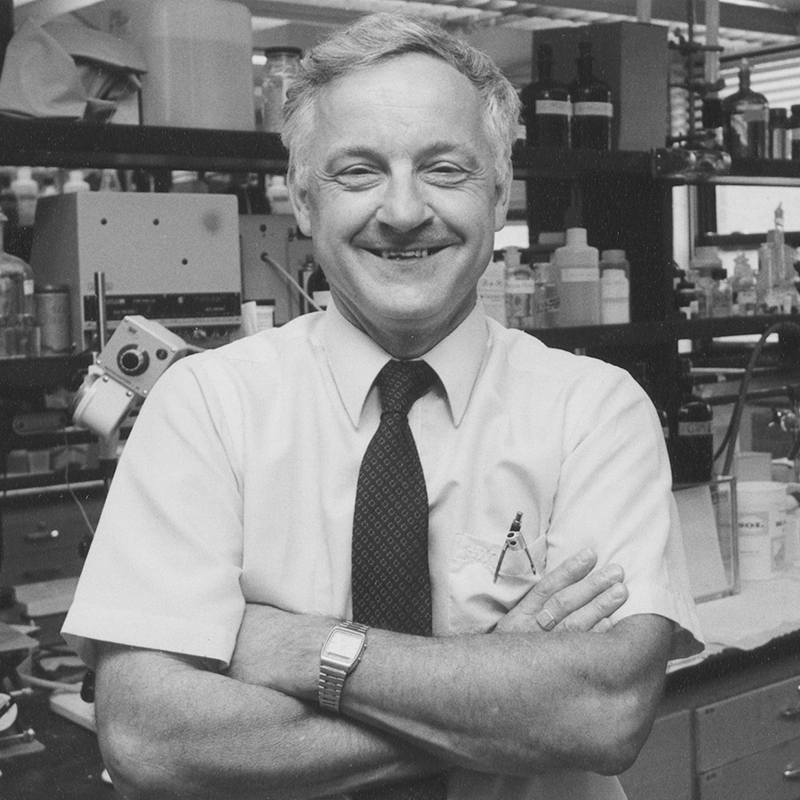 University of Kansas Medical Center
Kurt Ebner, pictured here in 1986, studied enzymology and the structure-function of the hormone prolactin.

Born March 30, 1931, Ebner grew up in Canada and received bachelor’s and master’s degrees from the University of British Columbia. He earned a Ph.D. from the University of Illinois in 1960, working in Bruce Linder Larson’s lab. He studied at the National Institute for Research in Dairying in England with Herbert Gutfreund on a National Research Council postdoctoral fellowship and was then a postdoc at the University of Minnesota with Paul Boyer, who shared the 1997 Nobel Prize in chemistry.

Ebner’s research focused on enzymology and the structure-function of the hormone prolactin. He received the National Institute of Health Career Development Award in 1963 and the Borden Award from the American Chemical Society in 1969. He was a diplomat of the National Board of Medical Examiners and represented biochemistry chairs on the Council of Academic Societies, American Association of Medical Colleges.  In 2011, former students and colleagues formed the Kurt E. Ebner Discovery Lectureship at the University of Kansas Medical Center in his honor.

In his youth, Ebner played amateur baseball and captained a volleyball team that won the British Columbia high school championship. After retirement, he played golf in senior leagues. He and his wife traveled extensively and enjoyed camping in the mountains. He was deemed the official photographer of functions sponsored by the Friends of Music and the Arts at his church.

He is survived by his wife of more than 60 year, Dorothy, as well as four children and nine grandchildren.