Judith Simcox’s interest in science began with a high school assignment: a research paper on a topic of her choice. Inspired by her sister Jan, Simcox asked why people with Down syndrome have higher rates of Type I diabetes. She found that the relationship is well established, but scientists “had no idea what causes these high rates, which was really shocking to me,” she said. “It was the first time I asked a question about the world around me that had no answer. I knew I wanted to tackle these types of questions.” 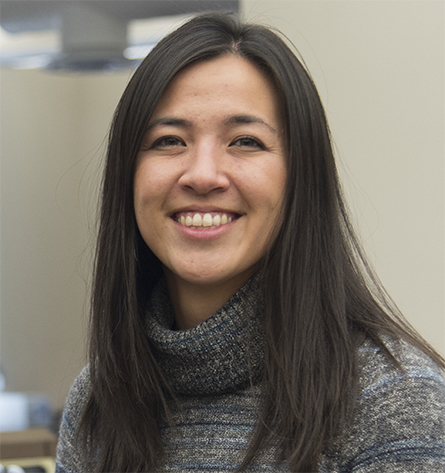 Simcox studied biology at Carroll College, where she joined a research lab focused on how environmental pressures shape the genetic code of black fly populations. “I went into college and didn’t really know what being a scientist was at that point,” she said, “but I started to realize that you could bring your perspective into science.”

Simcox’s mother, a nurse who worked night shifts so she could care for Jan, was diagnosed with breast cancer at age 40. Like her high school assignment, this event inspired Simcox to ask why — and the latter question ultimately formed the basis of her Ph.D. research.

Simcox learned that asynchronous tissue-specific circadian rhythms — which are set by light and diet — in night shift workers increase rates of metabolic diseases like breast cancer. “What we were really exploring was how different dietary elements impact circadian rhythms,” she said. “We found that, at the molecular level, dietary iron resets the circadian clock in the liver.”

Now an assistant professor of biochemistry at the University of Wisconsin–Madison, Simcox continues to draw inspiration from her life experiences. “In my research and in the way I think about science I bring that urgency, because I know what it’s like to live with these diseases.”

Investigating the origin and function of lipid metabolites

Judith Simcox’s research focuses on the production of and intertissue communication by lipid metabolites. “I am really fascinated by how organisms communicate with their environment through nutrition,” she said. “The questions I’m really trying to get at are: What are these many different lipid species in our plasma and what are they doing? Can we figure out where they’re coming from, how they’re regulated, or what they are functionally communicating?”

To address these questions, Simcox performs mass spectrometry on plasma samples. The resulting data include around 4,000 spectral signals that could come from lipids, only about 1,000 of which have been identified. In a collaboration with Agilent, Simcox is pushing the capability of current technology to bridge this gap.

Simcox also characterizes the function of identified lipids — especially their role as signaling molecules — following exposure to environmental pressures in mice and humans. “Fundamentally,” she said, “what we have to understand is what these lipids are doing in normal physiology and how have these diseases hijacked our normal biology.”

Simcox is also interested in plasma lipids as diagnostics. “We’ve known since the 90s that things like high- and low-density lipoproteins and triglycerides are really poor markers of metabolic health in African Americans and Native Americans, so we’re working to find more equitable biomarkers.”