I’d never given much thought to kidneys — mine or anyone else’s — until I found myself in the care of an infusion nurse who’d given one of her kidneys to her sister while in college.

I listened intently as my nurse told me about first losing her brother to kidney failure and then doing her part to save her sister, who has the same genetic disease.

I considered how I’d taken my own kidneys for granted and probably needed the pair to pull double-duty as a pricey biologic made its way, drip by drip, from the IV bag into my bloodstream.

The second time I was unsuspectingly shoved into having a new appreciation for the renal system was when a National Institutes of Health researcher told me he saw a nonobstructive kidney stone on one of my CT scans. Drink more water, he said as I nursed my third coffee of the day. I assured myself: Maybe it’ll just stay put and leave me alone. So far, it has. But I don’t trust it. 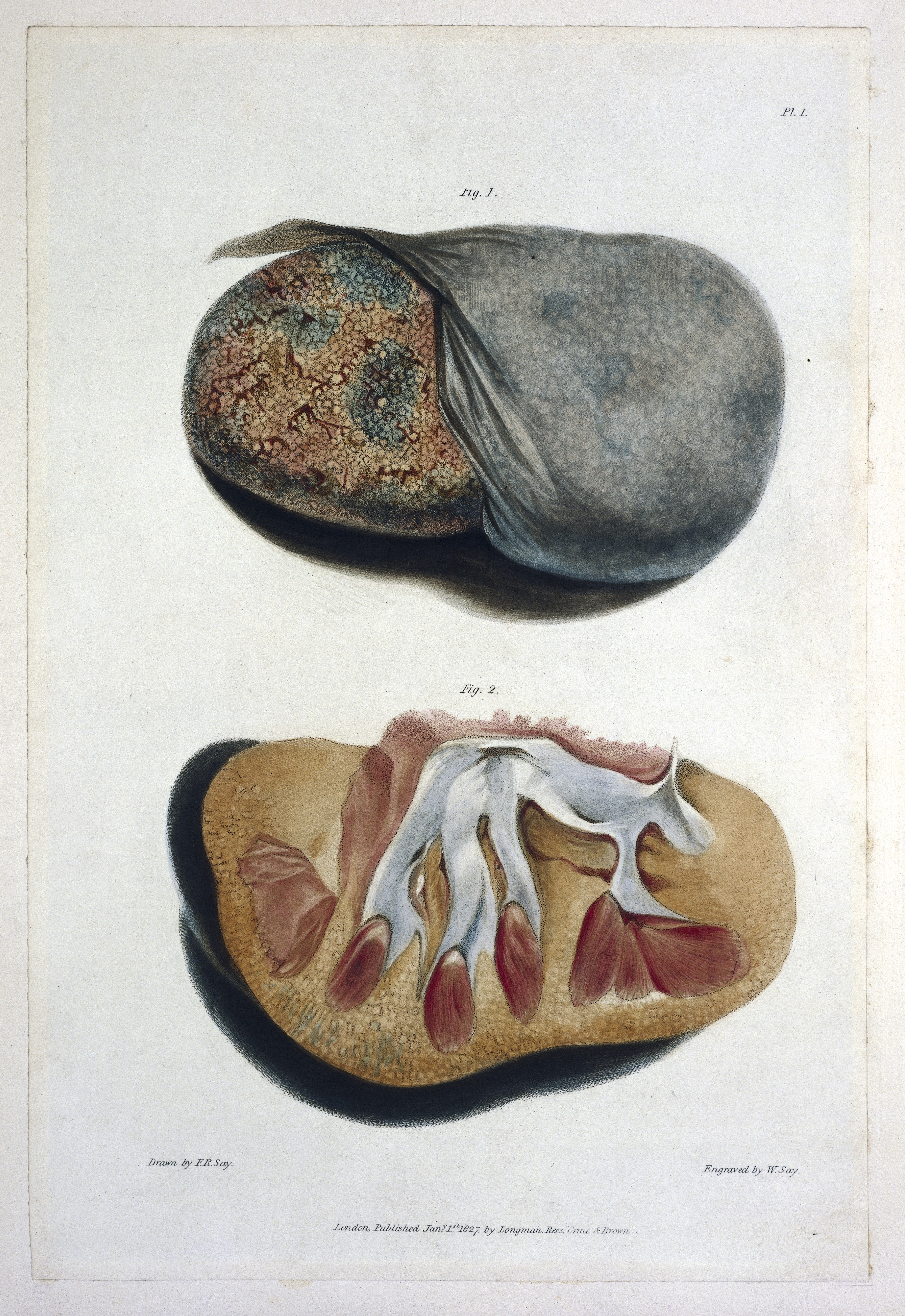 Wellcome Images on Wikimedia Commons
On World Kidney Day, March 14, the National Kidney Foundation will be providing free screenings for those with increased risk of kidney disease. (See list of at-risk populations and a schedule of events.)

I know it shouldn’t have taken a heartbreaking/heartwarming story or the threat of pain reported to be worse than childbirth to make me give my kidneys the kudos they deserve. But, since then, I’ve done my kidney homework.

Here are a few tidbits about kidney history for the curious among you:

I hope you’ve enjoyed this edition of “Angela Learns Stuff and Shares It with Readers.”

Now, I’m pleased to present below a collection, curated and summarized by science communicator Jonathan Griffin, of kidney stories and research in observance of this National Kidney Month.

Why do kidney disease and heart failure correlate?

Protein kinase Cα, or PKCα, is closely associated with a protein that has been implicated in kidney fibrosis, but what role PKCα plays in the development of this disease has been unclear. By blocking PKCα signaling in cells and mice with fibrotic kidneys, researchers found that the enzyme contributes to kidney fibrosis by inducing autophagy, a process wherein cells degrade their own contents. The authors suggest that a drug that inhibits PKCα might help patients with chronic kidney diseases. These findings were reported in the Journal of Biological Chemistry.

Autosomal dominant polycystic kidney disease, or ADPKD, is characterized by large cysts that can lead to organ failure. Previous research has suggested that a key protein in the lung disease cystic fibrosis is also central in the pathways that lead to cyst growth in ADPKD. In a study published in the Journal of Biological Chemistry, researchers injected a cystic fibrosis into mouse and cell models of the kidney disease. The drug shrunk cysts in both cases.

Turning back the clock on kidney disease

Kidney function degrades as we age, but this process can be slowed by calorie-restricted diets. To find out how diet can stave off the effects of aging, researchers studied protein levels in the kidneys of mice fed a caloric-restricted diet. Their report in the Journal of Biological Chemistry shows that receptor proteins FXR and TGR5, which are decreased in the aging kidney, were restored with caloric restriction. In addition, the researchers fed mice a molecule that behaves similarly to both FXR and TGR5 and saw that age-related detriments in the kidneys were reversed.

Kidney damage over long periods can lead to chronic kidney disease, or CKD, which disrupts the body’s ability to filter out waste. Obesity increases risk for CKD. Research has shown that inflammation promotes fat deposition on other organs, so a team researchers investigated whether this was the case for kidneys. In their study, published in the Journal of Lipid Research, mice on a high-fat diet with chronic inflammation developed lesions and accumulated lipids in the kidneys. These inflammatory effects were avoided in kidney cells by silencing the fatty acid transporter CD36, which the authors suggest could be a promising target for CKD therapy.

Cisplatin is widely used to treat many different types of cancer, but one known complication is acute kidney injury, or AKI, which can result in loss of kidney function. Administration of cisplatin increases waxy lipids known as ceramides in the kidney but it has been unclear whether these lipids contribute to AKI. In a study published in the Journal of Lipid Research, researchers prevented ceramides from being metabolized into glucosylceramides in mice, which raised the ceramide levels and increased the severity of cisplatin-induced AKI. This finding highlights the role of ceramides in the development of AKI in response to cisplatin.

How a mutant enzyme contributes to kidney cancer

SETD2, an enzyme involved in DNA methylation, is often mutated in clear cell renal carcinoma, or ccRCC, but exactly how SETD2 influences the development of the kidney cancer has not been determined. Researchers at the University of California, Riverside used CRISPR/Cas-9 technology to shed light on the role of this enzyme, removing it from kidney cells and then analyzed changes in gene transcription and protein expression. They found that loss of SETD2 repressed DNA repair, altered cell metabolism, activated cancer genes and disrupted the cell cycle, all of which create an environment conducive to tumor growth. Their study was published in the journal Molecular & Cellular Proteomics.

Diabetic kidney disease is the most common cause of kidney failure and can occur as a complication of both Type I and Type II diabetes. In a paper published in the journal of Molecular & Cellular Proteomics, researchers reported a link between the proteomic changes caused by high levels of male sex hormones and impaired energy metabolism in diabetic kidney disease.