If you’re reading this, you probably don’t need us to tell you about the awesomeness of antibiotics. You’ve likely had a nasty sinus infection, urinary tract infection or some other bug that has required antibiotic therapy. You get it: Antibiotics are amazing. You might also know that overuse of antibiotics can backfire, because, with each successive generation, bacteria become resistant to the therapies. 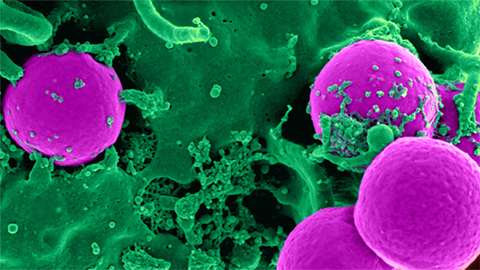 Antibiotic activities and mechanisms of resistance: a virtual issue

Antibiotic resistance is an urgent threat to health, food-production systems and global economies. The scale of the problem has resulted in calls to arms issued by international health agencies and by the United Nations. Tackling this challenge requires multifaceted strategies targeting the use (and misuse) of existing antibiotics as well as the introduction of new compounds into clinical practice. Molecular-level investigations of antibiotic activities and mechanisms of resistance represent a critical element in our response to the global challenge. The editors at the Journal of Biological Chemistry recently put together a virtual issue on antibiotic resistance. Read it here.

Even ‘agents of last resort’ in need of adjustment

The glycopeptide antibiotics, which include vancomycin and teicoplanin, are used to treat bacterial infections that have become resistant to other antibiotics. (Multi-resistant Staphylococcus aureus, or MRSA, infections, for example, often are treated with glycopeptide antibiotics.) But even these therapies of last resort aren’t always effective against the most stubborn strains. Researchers at Monash University in Australia recently reviewed the strategies that scientists are using to modify glycopeptides to address the growing challenge of antibiotic resistance. Read their review.

Tuberculosis is caused by Mycobacterium tuberculosis and is usually treated with a six-month administration of chemotherapeutic drugs, including the antibiotic rifampicin. However, there’s a lot of variability in recovery and relapse. Some patients rebound quickly. Others suffer longer. Researchers at the Council of Scientific & Industrial Research in India wanted to learn more about the factors that determine those patient responses. They discovered that the bacterium, which mostly lives within macrophage cells in its human hosts, partly relies on a human drug-efflux protein to evade treatment. Their findings explain some of the variability in how patients respond to drugs and could help inform more effective future therapies.

When one drug undercuts another

Most of the time, doctors use combination therapy to deliver a lethal one-two punch to bacteria. But sometimes that doesn’t work out so well. Researchers in Singapore recently described a drug targeting bacterial metabolism that reduces antibiotic-induced cell death in tuberculosis bacteria, highlighting the need to test drug combinations and learn more about how bacterial energy and death processes interact.

Inching closer to a vaccine for C. diff

Could we stop antibiotic-associated illnesses such as diarrhea and colitis by vaccinating patients against C. difficile? Researchers at the Universities of Bath and Exeter in the United Kingdom investigated a C. diff surface molecule that might serve as a target for a future vaccine.

On the importance of penicillin-binding proteins

Penicillin-binding proteins are bacterial proteins that bind to penicillin and other antibiotics of the β-lactam class.  Here’s research into these proteins in staph aureus, which causes skin infections that can become systemic; enterococci, which cause gastrointestinal infections; and Neisseria gonorrhoeae, which causes the sexually transmitted infection.

We think a lot about drug-resistant genotypes, or mutations that confer resistance, and less about drug-resistant phenotypes, which may not depend on a mutation but instead have to do with levels of proteins that confer resistance. In Klebsiella pneumoniae, which causes lung and other infections, a viscous capsule around the bacterial cell can protect it from the immune system. Using K. pneumoniae isolated from a deadly outbreak, researchers grew the bacteria in culture to see how the bugs responded when treated with one of two antibiotics, which target cell-wall synthesis and protein synthesis, respectively, or a combination therapy including both drugs. By studying how the bacteria that survived antibiotic treatment differed from susceptible parent strains, the researchers showed that proteomic transitions could contribute to drug resistance.

Mechanisms of antibiotic resistance in bacteria

Researchers in the Netherlands isolated the phosphoproteome from E. coli under normal growth circumstances and after exposure to a gradually increasing amount of antibiotics, which allowed the bugs to develop resistance over time. They studied how cell signaling changed in response to treatment with the drugs Ciprofloxacin or colistin. In both cases, extensive changes in bacterial signaling took place before resistance could develop; someday these signaling factors could be targets for drug design.

What amoebas can teach us about antibiotics

Ergosterol, a cholesterol derivative, is an important component of fungal and protozoan cell membranes but isn’t part of human cells. That makes it a great potential target for antimicrobials that can kill pathogens without harming the human host. Researchers in Texas and Tennessee conducted a study of “suicide substrates” of the ergosterol biosynthesis pathway, which can stop an amoeba’s sterol synthesis in its tracks.