True to its name, Phytophthora infestans is a destroyer of plants. (In Greek, “phyto” means “plant”; “phthora” means “ruin.”) Most notorious for the Irish potato famine, the pathogen also can target other members of the Solanaceae family of plants, which includes tomatoes, spices, weeds, herbs and vines. While a global, potato-based famine isn’t imminent, the pathogen still causes about $6 billion of damage to crops of the versatile tubers each year, according to the American Phytopathological Society.

In a Paper of the Week recently published in the Journal of Biological Chemistry, researchers in the U.K. report detailed crystallographic information about the interaction between one of the pathogen’s effector proteins and one of the potato’s proteins. They ultimately hope to exploit this result to engineer plants that are resistant to the pathogen. 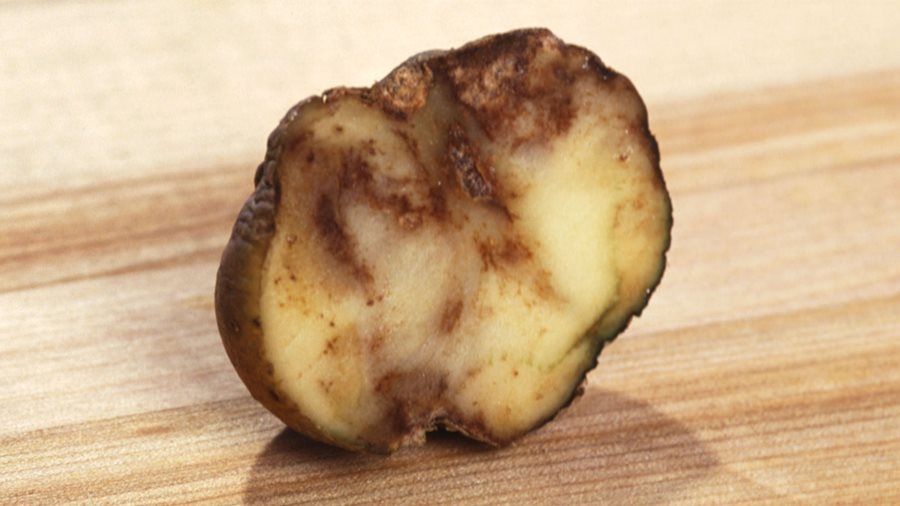 “If you can understand interactions and then modify the host–cell target in such a way that it retains its original function in the plant, but is no longer able to be acted on by the effector, that might push the balance of the disease progression in the favor of the plant,” says Mark Banfield at the John Innes Centre, the senior author on the paper.

According to Banfield, the effectors, which tend to be small proteins that bind to specific host proteins and modify their activity, often possess dual activities for host and pathogen. “One of them is to work on behalf of the pathogen to manipulate host cells for their own benefit,” he says. “But the plants have also evolved ways of recognizing the presence of these molecules as foreign objects inside cells and then are able to mount a response to those molecules directly.”

Banfield and his colleagues at the Sainsbury Laboratory Norwich and the Imperial College London, with whom he collaborated on the current paper, previously had characterized the PexRD54 effector protein of Phytophthora infestans and verified its interaction with the host cells’ ATG8 proteins. Their characterization appeared in the journal eLife earlier this year.

ATG8 is a protein located in the membranes of eukaryotes’ autophagosomes, which are double-layered membrane organelles involved in delivering damaged cellular structures to the lysosomes for degradation, among other functions. PexRD54 works on behalf of the pathogen by binding to this protein in host cells and interfering with its ability to perform its normal cellular function.

For this JBC paper, the investigators wanted to explore further the interaction. The researchers first determined the crystal structure of PexRD54. They then focused on the protein’s disordered C-terminus, a region of around 10 to12 amino acids that the researchers knew bound directly to the ATG8 molecule, and used X-ray crystallography to show the complex.

With the components of the linked region well defined, they then turned to a low-resolution technique known as small-angle X-ray scattering to get an image of the surface of the entire bound protein complex. They were then able to dock the separately defined features, including the individual proteins and the interacting region, into the protein surface, forming a complete image of the interaction.

With this interaction now well characterized, Banfield and his colleagues hope to engineer the ATG8 protein to ignore the presence of the PexRD54 effector from the pathogen.

“If we can engineer that molecule in the plant cell to no longer be perturbed by the presence of the effector, clearly the pathogen has then lost the benefit of delivering that effector to host cells,” Banfield said. “It goes all the way to delivering it, but it no longer has the activity that it’s evolved to have.”