Amid the complexity of the immune system, where many highly specialized cell types perform particular functions, it can be easy to overlook the contribution of ordinary cells. Healthy or not, non–immune cells routinely present tens of thousands of peptides at a time on their surface for inspection by roving T cell sentinels. The peptides, originating from the proteins being expressed and degraded inside each cell, give a window into a cell’s state of health.

Arie Admon, a biochemist and emeritus professor at the Technion–Israel Institute of Technology in Haifa, studies these peptides, known as the immunopeptidome. “The peptides alert the immune system about pathogen infection,” Admon said. “Without them, we would be dead in a matter of minutes.”

Peptides arrive on the surface of a non–immune cell in the embrace of proteins called class 1 human leukocyte antigens, or HLAs. (Class 2 HLAs are expressed in professional antigen-presenting cells.) HLAs bind short peptides from proteins degraded inside the cell and present them on the membrane. Thanks to high genetic variation in HLA genes, which affects binding preferences, and to variation in protein degradation, each individual’s immunopeptidome has a dizzying variety of peptides. Still, T cells can recognize nonself peptides at vanishingly low abundance — as few as five or 10 viral or cancerous peptides out of thousands on one cell’s surface can trigger its destruction.

For a long time, immunopeptidome researchers couldn’t match that sensitivity. “Before, we were analyzing one peptide at a time,” Admon said. With modern proteomics, “Suddenly we can analyze thousands, tens of thousands within hours.” 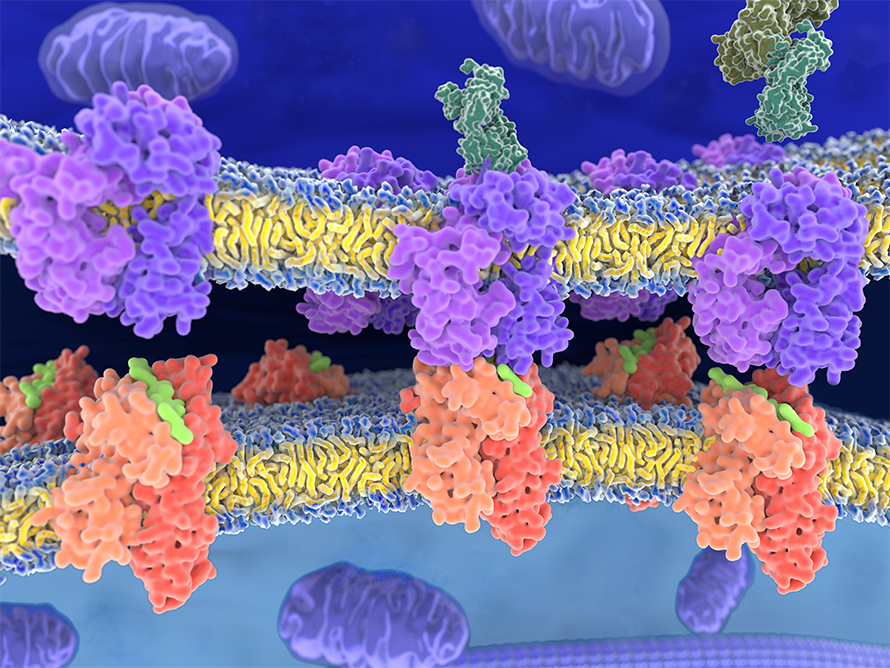 An artist’s rendering shows an interaction between a T cell and an antigen-presenting cell (below). The lower cell’s MHC receptors are shown in orange, with antigens in the immunopeptidome shown in green. This MCP study’s authors investigated how peptides from within the cell found their way to a related antigen-presenting complex.

In a recent article in the journal Molecular & Cellular Proteomics, part of a special issue on the immunopeptidome, Admon and trainees, including first authors Liran Komov and Dganit Kadosh, report on how an interferon released during viral infection changes the immunopeptidome.

Interferons alter protein synthesis and degradation and boost antigen processing for display. To determine the overall effect of these changes, the authors used isotope labeling to infer each protein’s rates of synthesis, degradation and incorporation into the immunopeptidome.

They found two protein populations. Some, dubbed retirees, were degraded long after synthesis; others were made and turned over even before they matured. Interferon treatment caused an uptick in the latter peptides, which Admon compared to industrial quality control.

“It’s like a factory,” he said. “Somebody along the production line of, let’s say, cars, is standing there, and at every step they’re taking some parts from the production line, breaking them apart as a quality-control approach.”

Increasing such turnover during infection may help cells present viral peptides for faster detection. In addition, the immunopeptidome showed the researchers traces of increased turnover in protein complexes, such as the ribosome and the proteasome, that change their makeup to alter activity during inflammation. The researchers proposed that, during the switchover, excess subunits were degraded and were more apt to appear in the immunopeptidome. The physiological effect of that increased churn in subunits is unclear. In addition, viral infection in a real organism is much more complex than interferon treatment of cultured cells, so the impact of greater turnover in a true infection remains to be seen.

Still, Admon said, a better understanding of the immunopeptidome could have translational potential. “It’s a lever that can help design drugs and vaccines that can save a lot of human lives.”