Had he been a trifle less modest, Guido Guidotti’s name might have appeared on many more of the textbook membrane protein discoveries of the 20th century. Trainees in his lab at Harvard University unraveled the stoichiometry of the sodium-potassium ATPase; discovered that it, and a glucose transporter, are responsive to insulin; and explored cell signaling responses to other hormones, such as vasopressin. But Guidotti was loath to claim credit for research from his lab if he had not conducted experiments himself. 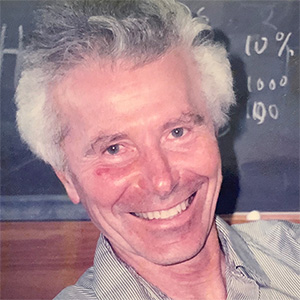 “There are many papers from Guido’s lab where Guido’s name is not in the author list,” said former student Ting-Fang Wang, who is now a professor at Academia Sinica in Taiwan. It was only after a grant reviewer objected to his use of papers on which his name didn’t appear as evidence of past progress that Guidotti began to sign all of the work published from his lab.

That’s how Guidotti came to be the senior author on Wang’s 1996 Journal of Biological Chemistry article, “CD39 is an ecto-(Ca2+,Mg2+)-apyrase.” Guidotti and Wang combined clues from the literature with a detailed biochemical investigation of CD39 to demonstrate that the protein catalyzes the removal of a pyrophosphate group from ATP and that it exerts this activity outside of the cell rather than in the cytoplasm. Subsequent studies have found important roles for CD39 as a regulator of purinergic signaling in blood clotting, neuronal synapses, cancer and immunity. 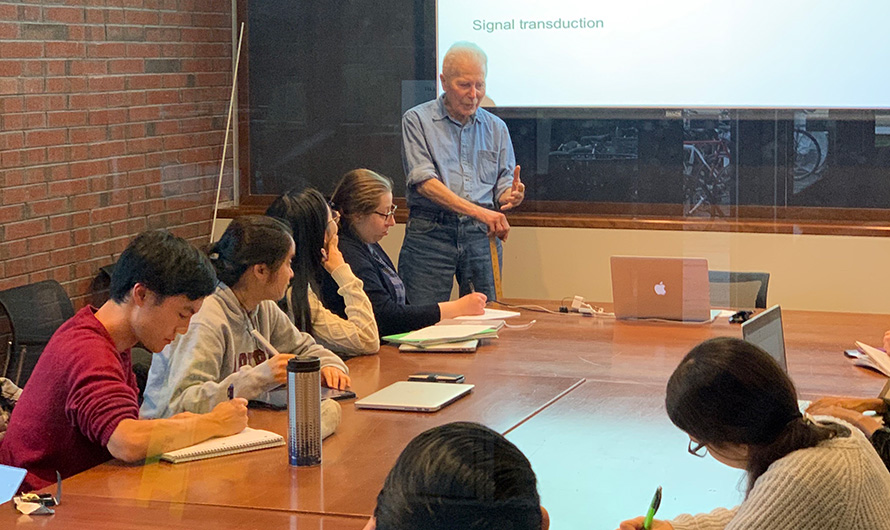 Courtesy of Nancy Kleckner
Guidotti teaching his Biochemistry of Membranes course at Harvard in 2020 just before the pandemic.

Wang worked on a protein that had frustrated trainees for nearly a decade. Trainees in the lab, beginning with Sue-Hwa Lin, were working with a purified membrane protein that they initially expected might transport calcium out of cells to maintain a low intracellular concentration. Much like known calcium pumps, this enzyme cleaved ATP, and its activity increased when calcium or magnesium were present. But it was challenging to work with. It was embedded in the membrane, but all attempts to solubilize it led to activity loss. Several people had tried to clone the gene, according to Wang, but found that when they overexpressed what they thought was the right gene, it lacked activity. Despite these challenges, over time it became clear that there was no calcium transport activity. Instead, the protein simply converted ATP to AMP, cleaving a pyrophosphate group.

Guidotti was an avid late-night reader of scientific journals, according to his wife, molecular biologist Nancy Kleckner. Aware from his reading that potatoes seemed to have an ATPase similar to the mystery membrane protein the lab was investigating, Guidotti asked his student Mas Handa to purify the potato enzyme. After peeling many potatoes, Handa obtained an active enzyme and a partial peptide sequence. BLASTing the latter, they found that it was homologous to human CD39, a membrane protein expressed in B cells. 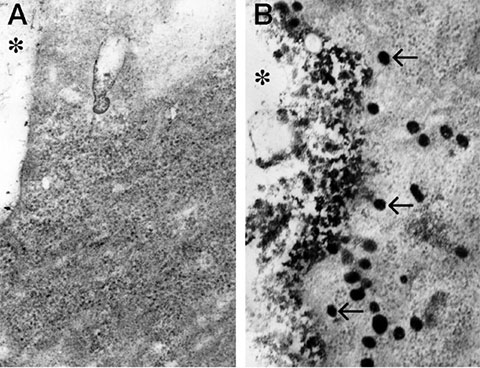 Koziak et al., JBC 2000
In electron micrographs from a 2000 study of CD39 that Guidotti’s group published in the Journal of Biological Chemistry, CD-39 transfected into cells appears at membranes stained with a CD-39 antibody (right) or for ATPase activity (left).

There was significant circumstantial evidence to suggest that CD39 was an extracellular ATPase when Wang picked up the project. Aware thanks to his immunologist wife that infection can induce CD39 expression, he incubated B cells infected with Epstein–Barr virus with radiolabeled ATP and observed much greater pyrophosphate cleavage than in uninfected cells. This was another clue that CD39 could be the enzyme they were looking for.

Because attempts to purify the protein had destroyed its enzymatic activity, Wang and Guidotti compared the ATPase activity in intact and lysed cells. The activities were the same, indicating that the active site was not sequestered in the cytoplasm but rather outward-facing. It also was unaffected by inhibitors of other well-characterized membrane ATPases, such as ion pumps.

Using degenerate primers matching the potato apyrase enzyme and a cDNA library from B cells, Wang isolated the CD39 gene. This enabled him to study transfected cells that, unlike EBV-infected B cells, differed only in the expression of CD39. This enabled a molecular demonstration that CD39 can cleave ATP, producing AMP. In a follow-up study, Wang, Guidotti and Yvonne Ou reported that interactions between the protein’s transmembrane domains could enable formation of a tetramer with greater enzyme activity.

Not long after the first JBC paper was published, Wang said, a Harvard lawyer called the lab to ask whether he wished to pursue a patent on CD39. Unsure of how to answer, he called Guidotti from his office next door to pick up the phone. “Without any doubt, he said, ‘This is Harvard. This is a place for educating students and training young scientists. This is not a place for making money,’” Wang recalled.

Wang called that answer absolutely characteristic. Guidotti always refused to self-promote, he said, but “People respected him; people knew that’s what he did. But in the real world, it’s very hard for other people to copy this model.”

The lawyer was correct to recognize the potential value of knowledge about CD39. Subsequent studies have shown that by regulating the extracellular balance between ATP and AMP — and providing a rate-limiting substrate for another enzyme to convert AMP to extracellular adenosine — the enzyme affects many physiological systems.

Another group found shortly afterward that CD39 embedded in vascular cells is important in blood clotting; ATP can be released during cell lysis, and CD39 determines whether ADP, which promotes platelet aggregation, can accumulate, or whether the ATP instead is metabolized to adenosine, which inhibits aggregation.

Meanwhile, Guidotti’s lab also continued to study the activity of CD39 and the purines it regulates. They found CD39 expressed in neurons and astrocytes, where later studies indicate that the balance between extracellular ATP and adenosine is important for sleep–wake cycles.

Finally, in the immune system, extracellular ATP is interpreted as an inflammatory danger signal, while extracellular adenosine promotes immunosuppression. By converting ATP to AMP, which later is cleaved to adenosine, CD39 can modulate inflammation and the activity of cytotoxic cells. Today, several antibodies that allosterically inhibit CD39 are in late stages of clinical development for treatment of different cancers. Because extracellular ATP acts on numerous immune cells, boosting their activity, reducing CD39 activity can help enhance immune surveillance and clearance of tumor cells. There is also preclinical evidence that the inhibitors act synergistically with other types of immunotherapy, such as PD-1 inhibitors.