Myelin, a fatty substance akin to wire insulation, allows fast neuronal signaling both within the brain and to the rest of the body. When myelin in the brain or spinal cord is damaged, adult stem cells called oligodendrocyte progenitor cells, or OPCs, respond by developing into new, fully fledged oligodendrocytes that wrap new myelin around neurons, protecting them and restoring their ability to carry fast electrical messages. 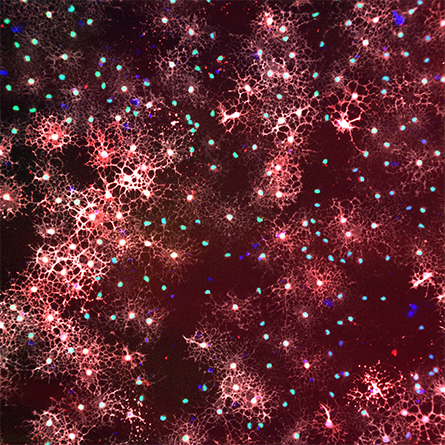 The human body’s ability to regenerate lost myelin declines with age. Patients with multiple sclerosis are intimately familiar with this shift. The disease, usually diagnosed in a patient’s twenties, arises when a person develops an immune response to myelin proteins. It starts out as a series of flare-ups of symptoms such as muscle weakness and numbness, followed by months or even years in remission as new oligodendrocytes provide fresh myelin. The disease shifts to a progressively worsening disability in middle age.

Neuroscientist Alerie Guzman de la Fuente is interested in developing a better understanding of oligodendrocyte progenitor cells to determine why remyelination falters with age. The answer could inform scientists who hope someday to treat MS with pro-remyelinating therapies.

“Most labs studying oligodendrocyte progenitor biology use neonatal OPCs to test drugs,” Guzman de la Fuente said. “These cells are incredibly powerful at forming myelin.” That makes them an imperfect system for studying how myelin formation goes awry with age, she said. “We think that studying adult OPCs … is more relevant to what will happen in the progressive phases of MS, in patients over 50.”

In a recent paper in the journal Molecular & Cellular Proteomics, Guzman de la Fuente and her colleagues in Robin Franklin’s lab at the University of Cambridge reported a comparison of the proteomes of OPCs from neonatal, young adult and mature mice. Franklin’s lab and others previously have studied the transcriptome of these cells. However, Guzman de la Fuente emphasized, RNA and protein levels are not always perfectly correlated.

Some protein features were quite stable through a mouse’s lifetime. Others changed dramatically. The team focused on the proteins that changed most between young and mature adulthood, and they identified a few patterns.

As with many aging cells, the stem cells from older mice showed some gene-expression drift, acting as if they had begun to differentiate but without gaining the ability to make myelin. The team noticed that as animals aged, their stem cells were more likely to have difficulty metabolizing cholesterol, an important component of myelin; older OPCs were more apt to express proteins involved in other neurodegenerative disorders such as Alzheimer’s and Parkinson’s disease, although what these changes mean remains to be elucidated . Finally, as with many aging cells, the OPCs from older mice also showed changes in protein homeostasis.

It will take time and further experiments to determine which of these changes cause the remyelination decline that appears with age. But, Guzman de la Fuente said, having a clearer picture of how the brain changes with aging can only help future efforts to treat multiple sclerosis.

The evolution of proteins from mysteries to medicines
Ken Hallenbeck
'Every experiment and every breakthrough matters'
Angela Hopp
Progeria: From the unknown to the first FDA-approved treatment
Ankita Arora
Raising awareness and funding for Pompe disease
Isha Dey
A novel approach to septic shock leads to a prospective new therapy
Caleigh Findley
When scientists become allergic to their research
Hannah Thomasy