There is no cure for Niemann–Pick type C1, or NPC1, disease — a progressive neurological condition that often begins in infancy. With early onset, children may live for only five years. One of the first signs of NPC1 disease is a swollen abdomen due to an enlarged liver or spleen. Doctors and researchers do not yet know what causes this, but left untreated, it can be life-threatening. 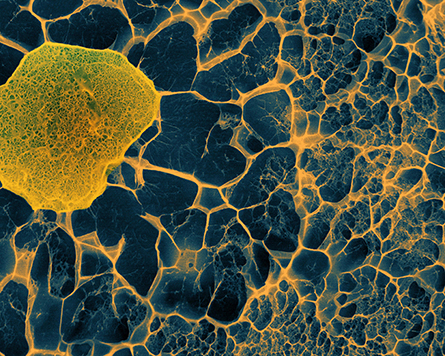 Sílvia A Ferreira, Cristina Lopo and Eileen Gentleman, KCL.
A colorized image of a human stem cell (yellow) embedded within a 3D matrix
that mimics the bone marrow environment, as captured by cryo-scanning
electron microscopy.

NPC1 disease is caused by mutations in the NPC1 gene, which encodes a protein that transports cholesterol. In a 2008 study, researchers suggested that hepatic loss of NPC1 induced extramedullary hematopoiesis (the generation of white blood cells from stem cells outside the bone marrow) in the liver. There, the stem cells proliferate and contribute to an enlarged and inflamed liver. However, they found no direct proof of extramedullary hematopoiesis, and effects on the spleen were unclear.

In a recent study published in the Journal of Lipid Research, Anouk Groenen, Anouk La Rose and colleagues at the University Medical Center Groningen report that loss of NPC1 in hematopoietic stem cells triggered stem cells to leave the bone marrow and invade the spleen.

It was NPC1’s role in cholesterol trafficking, a research focus of their laboratory, that first caught the researchers’ attention. NPC1’s normal function, which shuts down in NPC1 disease, is to empty out cholesterol from storage compartments inside the cell.

When the team deleted NPC1 from hematopoietic stem cells in mice with high cholesterol, something was obviously happening. They noticed that the bones of these mice were almost white, La Rose said. “We saw that there were almost no stem cells left in the bone marrow and that they had migrated to the spleen, and we were very surprised to see this.”

“I think this is a first step — to look at the things that we see in the mice, if this also happens in NPC1 patients,” Groenen said.

Next, they would like to see that the hematopoietic stem cells are entering the blood in NPC1 patients, La Rose said. “If we can show that, then it’s very likely that, indeed, they also go to the spleen and perhaps the liver in the patients.”

One potential link between loss of NPC1, elevated growth factor and stem cell mobilization is buildup of 7-ketocholesterol. This oxidized form of cholesterol is a main component of oxidized low-density lipoprotein, one of the major cholesterol carriers in the blood.

Previously, a small clinical trial attempted to raise levels of E06 antibodies that neutralize oxidized low-density lipoprotein. It was unsuccessful in raising E06 levels, Groenen explained, and there were no NPC1 patients in the study.

“I think for future studies it will be very interesting to find a way to raise E06 levels in patients,” La Rose said. If successful, this might halt the progression of NPC1 disease.