For some authors, PowerPoint is the go-to software for preparing figures. Despite its popularity, PowerPoint has some serious shortcomings. Here, I will discuss why PowerPoint is not a good tool for illustrating your data. Instead, you should be using software dedicated to graphics editing, such as Illustrator or Inkscape, to ensure that figure quality is not compromised. 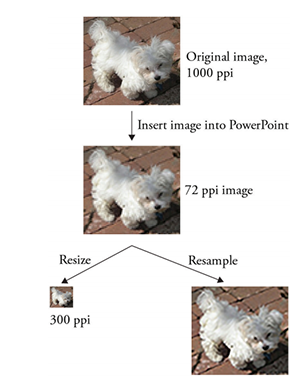 Figure 1:  I’ve taken a 1000 ppi photo of my dog, Kim Chee, and converted it into a 72 ppi image, a scenario that would happen if you inserted your image into PowerPoint. To convert the PowerPoint into a 300 ppi TIFF, Photoshop will either resize or resample the image, and both processes may yield unusable images.

PowerPoint is a great program for making slide presentations. It’s just not so great for making figures. PowerPoint works at screen resolution, which is 72 ppi. So when you export or save slides as TIFF files from PowerPoint, it exports them with a resolution of 72 ppi, which is insufficient for print.

Now, some people use work-arounds. For example, they open the exported TIFF files in Photoshop and simply change the resolution from 72 ppi to 300 ppi (or more). But beware — there are pitfalls to going this route.

When you go to the “Image Size” box in Photoshop, you will see the “Resample” box. If this box is checked when you upscale or increase the resolution, Photoshop will keep the physical dimensions of the image the same and create additional pixels to generate a higher-resolution image. The additional pixels are created by a method called resampling, and the resulting image may therefore not appear the same as the original.

On the other hand, if you uncheck the box, the program will not create any new pixels but will instead decrease the size of the image to increase its resolution. This new image may be extremely small and may not be usable by the publisher (Figure 1).

There are some other ways of turning PowerPoint files into TIFFs, but they suffer similar drawbacks. For example, some users might take a screenshot of the PowerPoint slide and then convert the screenshot into a 300 dpi TIFF in Photoshop, but this method has the same issues as above.

Another method I’ve seen used is to save the PowerPoint as a PDF and then convert the PDF into a TIFF. This method risks compromising image quality, as certain types of PDF conversions apply a JPEG compression to the file. If you recall from my May column, JPEG compression can introduce artifacts into your images and should be avoided at all costs.

There are other work-arounds that involve changing registries or doing some conversions that I won’t get into, but the easiest way to avoid these problems from the outset is to use software intended for combining high-resolution images with vector graphics.

The bottom line is that PowerPoint is software designed to give screen presentations, not to produce publication-quality figures. In fact, the output from PowerPoint needs to go through multiple conversion steps to arrive at a final product with possibly compromised integrity. Using appropriate software, such as Illustrator or Inkscape, during figure composition will ensure you are presenting your data in the best possible way — with due diligence.