A risk factor for autoimmune thyroid diseases, phenotypic adaptation in the agent that causes burn infections and a new insight on a cell cycle protein. We offer summaries of papers on these topics recently published in the journal Molecular & Cellular Proteomics.

Identification of another risk factor for AITDs

Autoimmune thyroid diseases, or AITDs, are caused by a self-mediated attack on thyroid cells and ultimately affect thyroid gland function. Two common AITDs are Hashmito’s thyroiditis, or HT, and Graves’ disease. Before clinical symptoms appear, the human body produces autoantibodies against the thyroid cells, which allows clinicians to detect these illnesses. Researchers hypothesize that thyroid peroxidase antibody, or TPOab, a commonly used diagnostic marker, has a role in autoimmunity by modulating IgG glycosylation.

Recently, Tiphaine C. Martin of King’s College and an international team published a paper in the journal Molecular & Cellular Proteomics that focused on determining whether immunoglobulin G, or IgG, glycosylation is associated with TPOAb that is positive for AITD and whether AITD and glycan structures share any genetic, heritable factors.

In this study, the researchers found that TPOAb level and AITD are associated with decreased IgG core fucosylation. Additionally, they showed that HT is linked to a decrease of antennary alpha1,2 fucose and that enrichment of IgG N-glycan traits is associated with genes FUT8 and IKZF1, which are essential for IgG core fucose formation. The researchers could not determine genetic variances between AITD and IgG N-glycan traits; however, they showed that decreased core fucosylation and antennary alpha1,2 fucose are not associated with gene expression alteration in peripheral blood mononuclear cells.

In conclusion, the researchers propose a model in which FUT8 and IKZF1 have an aberrant expression in a tissue-specific manner instead of in the blood. They think this model will show that the altered expression causes antibody-dependent cell-mediated cytotoxicity directed against the thyrocyte due to afucosylated TPOAb antibodies. In turn, they propose that this cytoxicity leads to AITD development. 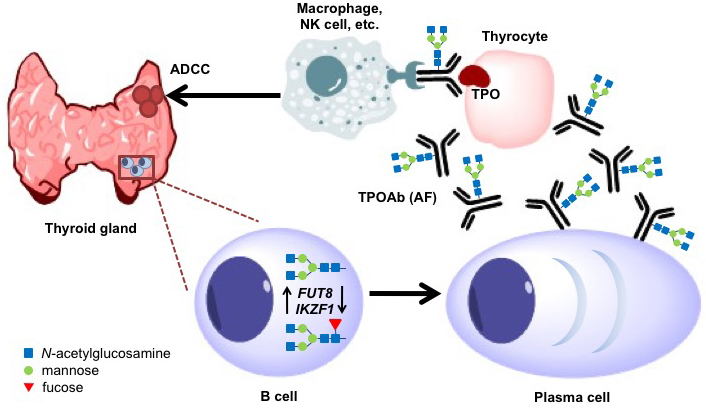 Tiphaine Martin et al./MCP
This proposed model illustrates the role of FUT8 and IKZF1 in the development of autoimmune thyroid diseases.

How a pathogen adapts to survive

Pseudomonas aeruginosa, a Gram-negative opportunistic pathogen, causes burn wound infections and pneumonia. It produces siderophores to acquire iron for survival and can express various iron-uptake pathways with specific TonB-dependent transporters, or TBDTs, which allows itto use exosiderophores produced by other bacterial species.

Quentin Perraud of the University of Strasbourg and a team of researchers in France recently published work in the journal Molecular & Cellular Proteomics focused on understanding how P. aeruginosa selects, regulates and adapts its expression levels of iron-uptake pathways in response to environmental stimuli. In this study, the researchers showed that P. aeruginosa uses different siderophores at different chelating efficiencies, with catechol siderophores being the most powerful. They also showed that expression of the TBDTs varied when P. aeruginosa was grown in three different media, which suggests that different phenotypic patterns exist. This work also shows that P. aeruginosa can detect the presence of epithelial cells and adjust gene expression accordingly. These findings show that P. aeruginosasenses changes in its environment and alters the expression of its various iron pathways to acquire iron and effectively compete with other bacterial species.

An essential protein in the cell cycle

Each day, millions of cells undergo cell division to make daughter cells. This extensively studied cell cycle consists of four phases: a gap phase, synthesis, a second gap and mitosis. Each checkpoint in this cycle is crucial, because any irregularities can lead to uncontrollable cell growth, also known as cancer.
A recent paper by Patrick Herr of Karolinska Insitutet and a team in Sweden, published in the journal Molecular & Cellular Proteomics, focused on dissecting cell cycle dynamics at the protein level in asynchronous cells, using methods other than chemical synchronization. The researchers characterized protein oscillation patterns over the course of the cell cycle and found that many vital processes are affected. The team detected differences in mRNA abundance and phosphorylation patterns among cell cycle phase groups. They characterized predicted cell cycle–dependent proteins, including S-adenosylmethionine synthase, or MAT2A. They found that MAT2A nuclear localization was enriched in synthesis and in the second gap and mitosis, and they speculate that this protein is essential for epigenetic histone methylation during DNA replication.