Nogo piggybacking on exosomes to restrict regeneration, a new therapeutic target for inflammatory bone disease and fusion proteins that trim triglyceride levels. We offer a selection of papers on these and other topics recently published in the Journal of Biological Chemistry.

Knocking out Nogo to rouse regeneration

The nervous system has the remarkable ability to adapt and respond to a variety of environmental signals. Its two components are the central nervous system and peripheral nervous system, or CNS and PNS, respectively. The peripheral nervous system, which consists of the nerves and ganglia outside of the brain and spinal cord, can heal after a traumatic injury through spontaneous axonal regeneration. Curiously, this same type of self-repair does not occur after CNS injury such as stroke or spinal cord injury. In 2012, Feras Akbik of the Yale School of Medicine and a team of researchers explored this disparity and identified Nogo-A, a protein expressed by neurons and nonneuronal cells called oligodendrocytes, as a molecule that hinders nerve cell regeneration. However, how Nogo-A might disrupt axonal regeneration after spinal cord injury remained a mystery. In a recent paper published in the Journal of Biological Chemistry, researchers describe how they helped to solve this mystery by identifying Nogo-A in a different location: exosomes.

Exosomes are small cellular storage compartments that can traffick select cargoes throughout cells, and their contents can mediate cellular communication, exerting effects on other cells. So, could exosomes be suppressing axon regeneration after traumatic injury? Yuichi Sekine and colleagues at Yale University School of Medicine tested this hypothesis by first expressing Nogo-A in a human cell line. They found that the enzyme beta-secretase 1 created a fragment of Nogo-A, called Nogo-24, that escapes from cells into the surrounding fluid on the outer surface of exosomes. Then, to confirm that Nogo-24 inhibits axon regeneration when presented to cells on the surface of exosomes, the authors cultured neurons and observed that injured axons regrow in the absence of exosomes with the Nogo-24 fragment. Finally, the researchers found that the Nogo-24 was present in an exosomal fraction of mouse spinal cord tissue that was injured but not in tissue from uninjured animals.

Their findings suggest a new pathway by which disruptive signals may be presented to prevent axon regeneration after injury. 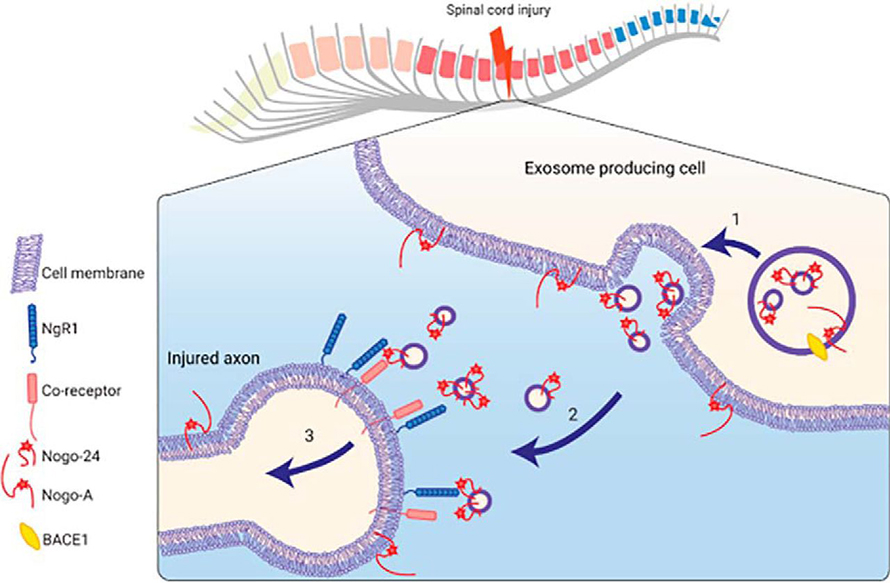 Sienna Drake and Alyson Fournier
This illustration shows how exosomal Nogo-24 may be released after spinal cord injury and signal through NgR1 to inhibit neuron regeneration.

Lipoprotein lipase, or LPL, is an enzyme that metabolizes circulating triglycerides. When LPL activity is compromised — as is the case in familial chylomicronemia syndrome, or FCS — plasma triglyceride levels are elevated dangerously, and few clinical options are available to correct them.

In a recent paper published in the Journal of Biological Chemistry, Amitabh Nimonkar and colleagues at Novartis Institutes for BioMedical Research showed that a fusion complex between LPL and the LPL transporter glycosylphosphatidylinositol-anchored high-density lipoprotein-binding protein 1, or GPIHBP1, demonstrates high enzymatic activity and is resistant to inhibitors of LPL. Moreover, injection of the LPL–GPIHBP1 fusion protein lowered triglyceride levels in several mouse strains, indicating its therapeutic potential for the treatment of FCS and other triglyceride-related diseases.

The mammalian target for rapamycin 1, or mTORC1, senses amino acids in the cellular environment and regulates cell growth and metabolism to match nutrient availability. Disruption in this sensing mechanism can result in metabolic disease and cell growth disorders.

Using cultured cells, immunoblotting, immunofluorescence and pharmacological approaches, Delong Meng of the University of Texas Southwestern Medical Center and colleagues demonstrated that some amino acids, such as leucine and methionine, signal mTORC1 through the well-characterized Rag guanosine triphosphatase signaling pathway, while others, such as glutamine and asparagine, signal through Rag-independent pathways. Their work was published recently in the Journal of Biological Chemistry and shows that mTORC1 is differentially regulated by amino acids and may be useful in furthering treatments for metabolic disease.

The autoinflammatory bone disease chronic recurrent multifocal osteomyelitis, or CRMO, is mediated by the inflammatory cytokine interleukin 1 beta, or IL-1beta, a known driver of bone lesions in CRMO. To develop effective therapies for the treatment of CRMO, researchers need to better understand the signaling events that result in high levels of IL-1beta. Tejasvi Dasari and colleagues at St. Jude Children’s Research Hospital used mutant mouse strains, immunoblotting and microcomputed tomography to reveal a role for the nonreceptor spleen tyrosine kinase, or SYK, in the signaling cascade, resulting in elevated IL-1beta levels.

Their work, published in the Journal of Biological Chemistry, suggests that SYK may be a therapeutic target for the treatment of CRMO.

The post-translational modification ubiquitination plays an important role in many cellular processes, including cellular immunity, transcriptional regulation and membrane protein maintenance. Deubiquitinases, or DUBs, such as Cezanne — an enzyme that cleaves ubiquitin from protein substrates — are crucial for the regulation of ubiquitin signaling. In a recent paper published in the Journal of Biological Chemistry, Julia Mader and colleagues at Goethe University in Frankfurt, Germany, discovered that adding hydroxyl groups to asparagine regulates Cezanne’s interaction with ubiquitin in an oxygen-dependent manner.