While chlorophyll is essential for capturing light energy in chemical form, it doesn’t work alone. Chlorophyll binds to a group of proteins found in the light-harvesting complex that turn that energy into ATP and other energy-carrying molecules, which plants later use to produce sugar.

This first step of photosynthesis takes place in the membrane of an organelle within the chloroplast. To get there, the proteins that make up the light-harvesting complex have to cross a tiny ocean of aqueous space. A chaperone protein called SRP43 picks up light-harvesting proteins as they enter the chloroplast and acts as a ferry to that internal membrane.

In a study he will present Sunday at Experimental Biology 2022, biophysicist Alex Siegel and colleagues found a second role for that chaperone, which also helps plants respond rapidly to high temperatures. The finding sheds light on how plants survive heat stress and also on how a single chaperone can protect many protein clients from aggregating.

Siegel’s collaborators at Humboldt University in Berlin found that plants that lack SRP43 have smaller, yellower leaves than their wild-type counterparts because their photosynthesis is less efficient. Siegel, a postdoc at the California Institute of Technology, was interested in how changes to the structure of SRP43 might drive its capture and release of light-harvesting complex proteins. 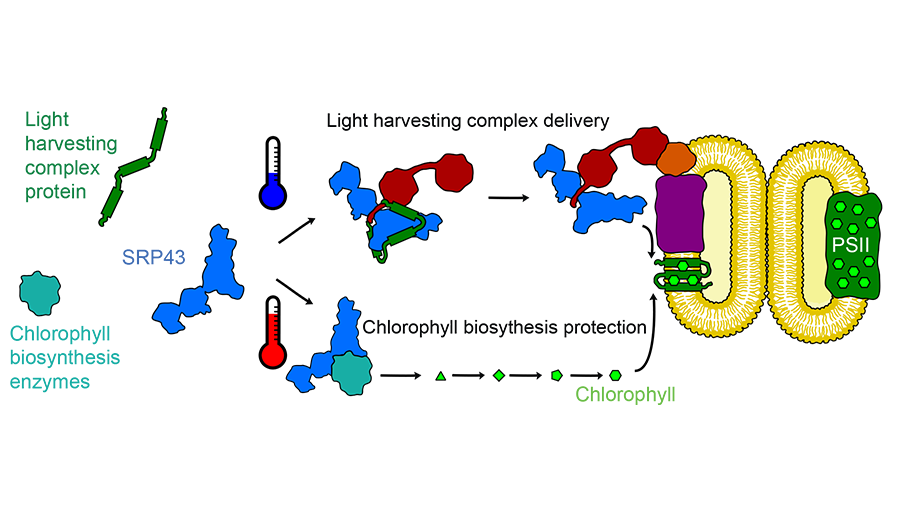 Courtesy of Alex Siegel
A schematic shows the effect of temperature on SRP43’s client selection. At low temperatures (above), it binds to hydrophobic proteins from the light-harvesting complex. Under heat stress (below), it binds to chlorophyll-producing enzymes.

“That’s the feature that makes all chaperones interesting: they’re really dynamic,” he said. “They can’t just stay in one form and do one thing. They have to be regulated so they can capture and release clients.”

SRP43 turned out to be even more dynamic than expected. While investigating how it bound to the light-harvesting proteins to prevent them from aggregating, the research team found that SRP43 also interacts with a second group of proteins, the enzymes that make chlorophyll. Siegel showed that heat stress can denature the three chlorophyll-producing enzymes, causing them to aggregate. Adding SRP43 prevents that aggregation.

Siegel was interested in how SRP43 can bind both to the loosely structured hydrophobic membrane proteins of the light-harvesting complex and to the more structured chlorophyll-producing enzymes. Using nuclear magnetic resonance, he found that heat pushes SRP43 from a rigid conformation to a more flexible, loosely structured state that is better able to bind the structured enzymes.

“SRP is a rapid-response chaperone,” Siegel said. The shift in its structure happens in roughly a second, meaning that if a plant’s environment heats up abruptly, SRP43 can begin to protect the chlorophyll-producing enzymes right away. Other heat shock–responsive chaperones must by synthesized and therefore take much longer to muster.

For a chaperone to bind numerous client proteins, Siegel hypothesizes that either the client protein or the chaperone protein must have a certain amount of flexibility in its structure. He’s now working on biophysical experiments to determine whether that’s the case.

“What I’m hoping to see (is that) disorder helps it interact with more clients,” Siegel said. “But, of course, we have to show that.”

You can read more about this research in the Journal of Biological Chemistry, Nature Plants and the Journal of Molecular Biology. Siegel will present his work between 4 and 4:15 p.m. Sunday, April 3, in Room 122B of the Pennsylvania Convention Center, during a session he will chair on membranes and membraneless organelles (abstract).