Elodie Ghedin and Christine Vogel had wanted to work together for years. They were friendly colleagues at New York University, both running interdisciplinary labs: Ghedin's focused on genomics and Vogel's on proteomics. 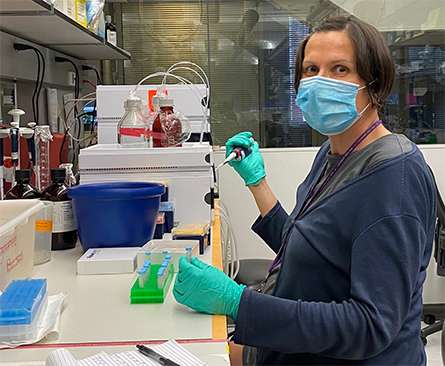 Christine Vogel pipetted samples for proteomic analysis the day before her daughter's
birth in 2020.

The opportunity to collaborate arose in 2016 with what Vogel playfully recalled as "a call from the NIH saying, 'Elodie, can you help us fix Zika?'"

Program officers at the National Institutes of Health had $152 million in emergency funding to learn more about the emerging virus as quickly as possible. They called on Ghedin and others with experience in viruses and in neglected tropical diseases.

At the time, one clinical challenge was differentiating between infections with Zika and related viruses, including the deadlier dengue and chikungunya, when both were circulating. Polymerase chain reaction, or PCR, diagnostics can differentiate the two viruses but only early in infection. If a patient suffers through a few days of fever and aches before arriving at the hospital, it may be too late to detect viral RNA. Because the viruses are so similar, antibody tests often used later in disease tend to be inconclusive.

During outbreaks of both Zika and dengue in 2016 and 2017, doctors at the University of the West Indies in Trinidad did their best to diagnose patients based on ambiguous lab tests and secondary Zika symptoms such as vomiting and intense pain behind the eyes. They also started a clinical trial, collecting serum samples from over 60 patients.

"We were lucky we even got access to these samples," Ghedin said; competition among researchers was intense.

The data set was challenging to work with. There was no healthy control group, and some records were missing information about symptoms; one even lacked the participant's gender. Although the researchers had planned parallel transcriptome and proteome analyses, they had to scrap the transcriptomics, because the samples' RNA had degraded somewhere between the clinic in the Caribbean and their freezers in New York. 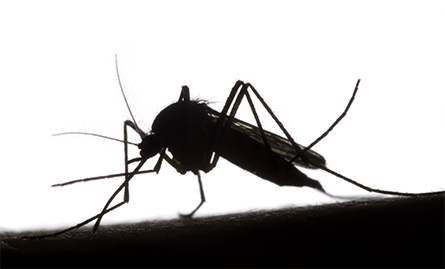 The closely related viruses that cause Zika and dengue both are transmitted by mosquitoes.

After proteomic analysis and rigorous statistical filtering, the two teams identified 13 proteins with different abundance between Zika and dengue infections, as they wrote recently in the journal Molecular & Cellular Proteomics. The differences, although small, could give new insights into Zika disease biology. For example, Ghedin said, they were surprised to observe that most proteins upregulated in Zika compared to dengue patients also are linked to pregnancy — which may yield new hypotheses about how the virus causes pregnancy complications and long-term health problems for newborns. The researchers emphasized that more validation work needs to be done before their observations can be used in the clinic.

Although urgency about understanding Zika ebbed with the epidemic, Vogel and Ghedin, who now works at the National Institute for Allergy and Infectious Diseases, continue to collaborate on multiomics studies. While studying samples from COVID-19 patients, Vogel has relied on lessons she learned from the Zika study.

"In the early days (of an outbreak), you do not have controlled studies. You just have whatever samples you can get," she said.

"I find a lot of my research is like that," Ghedin added. "You do what you can with the samples you can actually lay your hands on."