Norman Lewis at Washington State University began his scientific career as a natural product chemist. But his interests soon turned toward the biochemistry of plants. These days, Lewis is focused on generating transgenic trees that are designed to make high-value products needed in the flavor and fragrance industries. The American Society for Biochemistry and Molecular Biology’s science writer, Rajendrani Mukhopadhyay, spoke with Lewis about his work. The interview has been edited for length and clarity. How did you become interested in creating transgenic trees?

Plants produce a wonderful array of medicinals and aromatics. I’ve been very interested in many of the plant biochemical pathways for medicinals as well as flavors and fragrances. We’ve looked a number of biochemical pathways of compounds that are used widely in cancer treatment. All of the molecules that we look at are derived from an amino acid that humans don’t make, which is phenylalanine. Phenylalanine can be converted into other molecules — for example phenylethanol, which is the rose oil odor — as well as into a structural material called lignin, which is the reason plants can stand upright.

We wanted to be able to use fast-growing plants, like poplar or maybe even red alder, for producing molecules that you would get from someplace else, like rose oil or the oil of cloves, which you get from places like Zanzibar (in east Africa).… The molecule phenylethanol is widely used in the cosmetic and food industry in all sorts of things. We view this as a way to begin to produce high-value chemicals.

How do you choose which compounds to go after?

We look at molecules where we think we can manipulate the pathways in relatively small steps. For example, much of what we know about taxol, the anticancer drug, is that it’s a very lengthy pathway. It’s still, to this day, not completely understood. That would be a kind of molecule you would like to be able to produce, but you’ve still got a lot to learn about the genetic information. The phenylethanol one was chosen simply because it has a relatively short pathway from phenylalanine. It has only a couple of steps. It’s our intent now to start thinking about how we can use synthetic biology to perhaps circumvent steps, perhaps enable some enzymes to become catalytically more active.

Plants differ from most other life forms in that many of their specialized cell types accumulate molecules. For example, in the Far East, where cedar is used extensively for building temples, the cedars pump (and store) their chemicals, which help protect against fungi and bacteria.. Those structures stand up for thousands of years. Plants evolved a way of storing things. So what we’re trying to look at are ways to not just put a pathway into poplar, but also begin to ramp the levels up much higher. We began a company we call Ealasid Inc. We’re moving forward with the processes of commercializing our technologies.

What concerns do you have to address with genetically engineered plants?

There are many aspects to that question. One is that, when we do our field trials, we have to go through a process of working with (the U.S. Department of Agriculture’s Animal and Plant Health Inspection Service).. We indicate where we are going to set these things up. They give us a set of conditions that we’ve got to very closely follow.

We are not allowed to — and we don’t plan to and we don’t want to — let (the trees) get to the point where they can flower. We’re looking at doing a thing called coppicin. Basically, coppicin means you harvest the stem materials and they pop back up again. We don’t have to replant them. We can do that once or twice a year for about four or five years before it’s time to renew the plant material. That way, (the trees) never pollinate so they can’t mix with other species.

I would say that these (transgenic trees) are still new technologies. They are still certainly worthy of discussion. Yet it’s not really different from genetically modified corn and things like that. If one is going to be able to sustainably feed, clothe and shelter our burgeoning population, it really looks as if the only solution, at least that I can see, is being able to get these increases in productivity, even through genetic-engineering means. I think now folks at least have gotten the acceptance that (GMOs) are now in the marketplace.

You’ve got to do all the testing and make sure that everything is playing out the way you believe it is. We fortunately are able to bring the fantastic -omics (tools), from transcriptomics to proteomics and metabolomics, to see what we’re doing with these plants. I will have to say the safeguards that are placed in here are unparalleled with anything that ever has been seen before. I don’t think anybody has demonstrated (any) truly negative aspect of genetically modified organisms.

How do -omics technologies help you understand that you have the safeguards in place?

You can look at what effect that new pathway has on all the gene-expression patterns in the plant. By using transcriptomics, for example, you can see if the plant is functioning the same way or in a different way. If it’s functioning in a different way, what are those differences? Do these differences really matter? Similarly, when you do it from the proteomics side or the metabolomics side, you can see what influences this pathway has in there. Currently, we use a method called MALDI (matrix-assisted laser desorption ionization) metabolite imaging, where we look at tissues and find out precisely where these molecules are accumulating in the cell types.

There’s never been a more wonderful time than now to be able to not just incorporate these genes, but really look at the effects it has on the entire organism.

We’re looking at something that is fast growing so we can have a system where we can produce large amounts of biomass containing these chemicals. They are not as fas -growing as bamboo or eucalyptus. But in much of North America, these and other plants, like red alder, which we also have a program on, are some of the most rapidly growing organisms. They are also very adaptable to marginal land — not very productive land that now can have alternate uses.

How long have these projects been going on?

We’ve been working on the (rose oil) pathway for several years now. We put it into E. coli to begin with to make sure that we had the right genes. Then we put it into poplar.… The other ones we are doing go back much longer than that, like the oil of clove chemicals. The oil of clove goes back to about 1999. (The trees) are in field trials as we speak. The oil of cloves is something that is still in the process of being patented.

What are the challenges of making the leap from the bench to field work?

There are a number of challenges. One is nobody wants to pay for the field work. There aren’t that many opportunities for funding from the federal agency side, other than doing (federal small-business innovation research, SBIR) programs.

The USDA APHIS has very stringent requirements to ensure that things are done properly. They come and do regular inspections. There is a lot of oversight of these plants. You might think that you might be able to do all these things in a greenhouse or a growth chamber. Of course, you can certainly do this to get the first indications. But it’s not until a plant is actually outside, growing out in the environment, on a particular soil or in a climatic condition, that you really know how’s going to function.

What do you deem a successful transgenic plant?

If you get the effect you want, it’s successful. The scientific achievement is the first place. But why are we building this company? In order to get something that might be used commercially, somebody’s got to get the (intellectual property) protection and prevent anyone else from willy-nilly running off with it — getting things moving in a way that are responsible and transparent. There are very few examples of (transgenic) woody plants out there, unlike the annual crops. But, ultimately, this goes beyond phenylethanol or taxol or any medicinal or any flavor and fragrance. We are developing technologies that are going to help the growing needs of the world’s population. I think that’s where the true success lies. One would like to hope to be a small part of that. 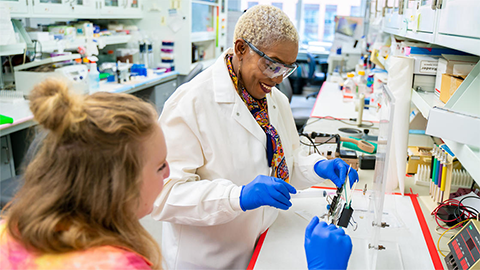