Building a focus on research

Klea Hoxha and her family moved from Pogradec, Albania, to the United States when she was 15 years old. She was not fluent in English and unassimilated to the culture. Still, she applied for a research experience at Coastal Carolina University that she saw on a flyer in her high school chemistry professor’s office, though she doubted that she would be accepted.

“The professor saw something in me, and I got accepted into the program,” Hoxha said. “That summer, I did research on bacteriophages, and I knew that I wanted to come to Coastal Carolina.”

Since then, she has not stopped doing research in the biomedical sciences.

Hoxha recently graduated with a major in biochemistry and a minor in applied mathematics and physics. She researched the structures of small regulatory RNA molecules in lactic acid bacteria and also did a separate physics project relating to therapeutic radiation on tissues. In addition to her research, Hoxha was president of the Chemistry and Biochemistry Club, vice president of the biology honor society TriBeta, and founder and president of the ASBMB Student Chapter at CCU.

Hoxha said she decided to establish the ASBMB chapter in the fall 2019 semester because she identified a disconnect between what the university provided and what the student body needed when it came to focusing on research. The ASBMB highlights recent research articles and scientists, and she wanted to share that with her classmates. 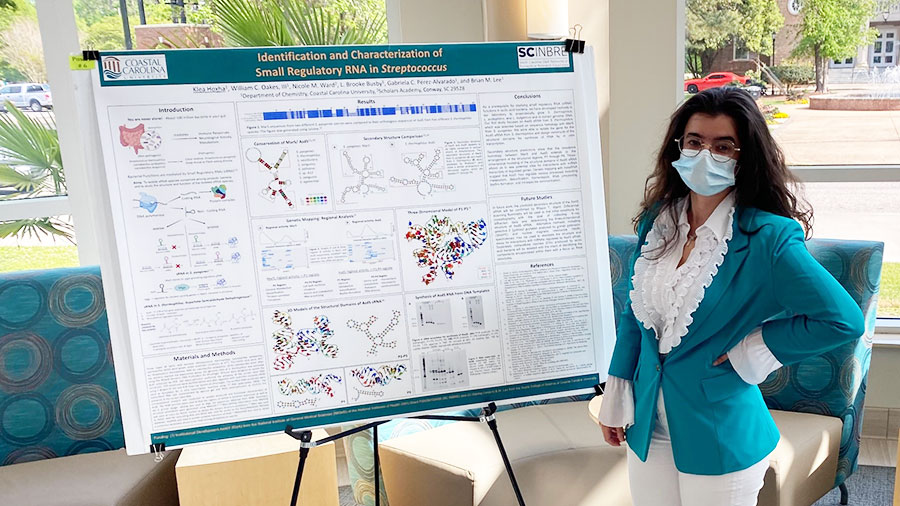 “We established a mentor–mentee program,” Hoxha said. “We connected upperclassmen with freshmen based on their interests and personalities.”

This program led to 80% of participating first-year students finding a research advisor and becoming involved with research.

The ASBMB chapter officers decided to pair new undergraduates with upperclassmen rather than professors because first-year students are often nervous about reaching out to professors, Hoxha said. The student pairing made the process of finding a research position less intimidating — and it built interest in the ASBMB. Hoxha’s former mentee was elected as this year’s chapter president.

The CCU ASBMB Student Chapter hosts guest speakers who address topics such as how to get accepted into graduate school, how to read a research paper properly and how to apply to medical school. Hoxha also wanted to establish a journal club through the chapter.

The chapter also has collaborated with TriBeta and the Sustainability Club to do beach cleanups in the area. Attendance at these events has been high.

“You get to meet people from different backgrounds,” Hoxha said. “I personally learned a lot about sustainability from these events.”

Hoxha now is attending the medical physics doctoral program at the University of California, Los Angeles. She is interested in research in immunotherapy, particularly focused on cancer treatments and radiochemistry.

Hoxha’s interests extend beyond science. She is passionate about poetry and has written poetry since her first year of high school to help her cope with anxiety. One of her dreams is to compete in women’s physique and powerlifting.

Her advice for undergraduates in biochemistry is to take risks. “Do everything you can and don’t stop trying,” she said. “If you figure out what you don’t like, that’s the biggest step to finding out what you want to do for the rest of your life.”