ASBMB Today People A science journey from beer to TB

A science journey from beer to TB

Colin Kenyon’s father believed science was important, and he engaged his son in daily conversations about the cosmos, planets and evolutionary biology.

“My language skills weren’t wonderful, but there was no question about me going off and doing fine art or anything,” Kenyon said. “I was going to do something in the sciences.”

His father, an Englishman, was serving in the British army in the Western Desert between Libya and Egypt during World War II when he met and married a South African woman of Lebanese descent, Kenyon said. The couple returned to her hometown of Barkly East in South Africa’s Eastern Cape Province after the war and settled there to raise their family.

When he was growing up in South Africa in the 1960s and ’70s, only white people had privileged schooling and easy access to higher education, Kenyon explained. “For those of us who lived in remote areas with limited financial resources to spend on education, the only way to do postgraduate study was to get bursaries,” he said.

Kenyon received a bursary, a form of college scholarship, from South African Breweries, a major brewer headquartered in Johannesburg, to complete his bachelor’s degree and then moved on to do his master’s working on optimizing the co-production of small molecules such as ethanol and glycerol during fermentation by the yeast Saccharomyces cerevisiae,aka brewer’s yeast, at a chemical company called Sentrachem.

From there, he went on to complete his Ph.D. in biochemistry at Rhodes University in Makhanda, South Africa, while working for the chemical company AECI, where his team pioneered the commercial production of L-lysine, an essential amino acid, by fermentation. Lysine is used widely as a feed supplement for livestock and in pharmaceuticals, dietary supplements and cosmetics. The calculated global lysine market was more than $3 billion in 2020 and is expected to grow at a rate of 5.75% annually.

Now a scientist at the Centre of Excellence for Biomedical Tuberculosis Research and a faculty member at the South African Medical Research Council Centre for Molecular and Cellular Biology at Stellenbosch University, Kenyon works on drug target identification, enzyme reaction mechanisms and rational drug design for TB. 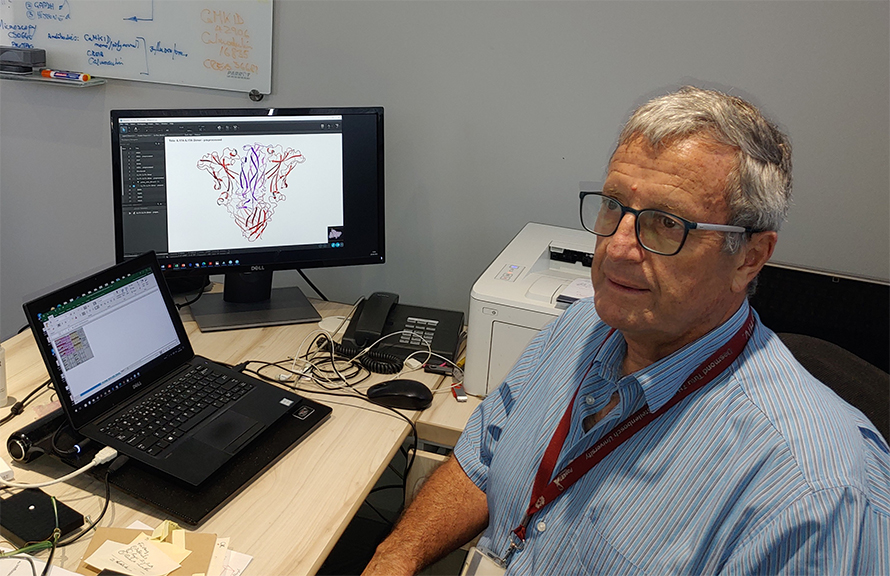 Courtesy of Colin Kenyon
A scientist at the Centre of Excellence for Biomedical Tuberculosis Research and a faculty member at Stellenbosch University in South Africa, Colin Kenyon works on drug target identification, enzyme reaction mechanisms and rational drug design for TB.

As Kenyon neared the end of his Ph.D., Nelson Mandela was released after 27 years in prison, sparking political turmoil in South Africa. At the same time, the Cold War ended when the Soviet Union ceased to exist. These events brought drastic and much-needed political change to South Africa and the country’s chemical industry. Kenyon was transferred to South Africa’s Council for Scientific and Industrial Research, where he had the perfect opportunity to pursue his interest in more fundamental research focusing on protein reaction mechanisms.

“Protein structure and function fascinated me from when I was an undergraduate,” he said. “The question of why enzymes were capable of doing the specific reaction intrigued me.”

His prior work on Corynebacteriaandglutamine synthetase, an enzyme that is relevant to making amino acids, serendipitously led him to enter tuberculosis research. Mycobacterium tuberculosis, the bacterium that causes TB, exports glutamine synthetase, a massive protein with a molecular weight of 660 kilodaltons, into the macrophages. Further, pathogenicity in tuberculosis is linked to this export, making glutamine synthetase from M. tuberculosis an excellent target for a rational drug design. While Kenyon was doing this work, he realized that researchers did not understand a lot about the chemistry of adenosine triphosphate, or ATP, and the phosphoryl transfer mechanism.

“I think the pendulum from within the world of cell biology has swung too far away from the fundamental physics chemical reactions going on in the cell,” Kenyon said. “We understand very little about the energy flux, carbon flux, and mass and energy balances.”

He started to work on kinetics and mechanisms of ATP chemistry using glutamine synthetase and other kinases as a model system. This research opened the doors for him to join an international consortium looking into structure-based drug design to develop novel kinase inhibitors specifically targeting the calmodulin-dependent kinase 1 enzyme group, which is implicated in triple-negative breast cancer and other diseases.

Although South Africa is among the most developed countries in Africa, doing science is challenging. “To do research that is internationally recognized requires money,” Kenyon said, “and for every scientist in South Africa to get that level of funding from the government is next to impossible.”

The government must balance projects investigating quantum mechanics in ATP chemistry against building houses for poor people, Kenyon said. “And we must be careful that we do not leave a significant number of our population behind.”

Science doesn’t happen in isolation, he noted, and as the technology and wealth gap increases, it has consequences in society. “We have to intervene,” he said, “and throwing money at (the tech gap) is not the solution— it’s allowing the scientists within Africa to become relevant, so the teaching needs to be relevant and the degrees that we give are relevant.”

Scientists in developing nations spend a disproportionate amount of time writing grant proposals with a significantly lower success rate than their peers in wealthier countries. “We spend too much time begging people to do our jobs,” Kenyon said. “I don't know of any profession in the world where people beg to do their jobs as scientists do.”

His greatest reward, Kenyon said, has been training master’s and Ph.D. students from varied backgrounds who have massive differences in quality of primary education and financial stability.

“To have students graduate who can come from very poor backgrounds and create the possibility that they will have significantly better opportunities than their parents ever dreamt of brings an inordinately large amount of joy.”

Finding ways to help through research and teaching
Heather Masson–Forsythe
‘Science in Africa — we do it well too!’
Clementine Adeyemi
‘Science is everything’
Inayah Entzminger
Seeing the molecular beauty of life
Jessica Desamero
Coming home to build on a science network
Christopher Radka
A medical student with a community mindset
Sarah May