ASBMB Today People A medical student with a community mindset

As a child, Mustapha Aminu had an inquisitive mind. “I used to play with a radio, and I wanted to find out what was inside — who was the one speaking in the radio,” he said. 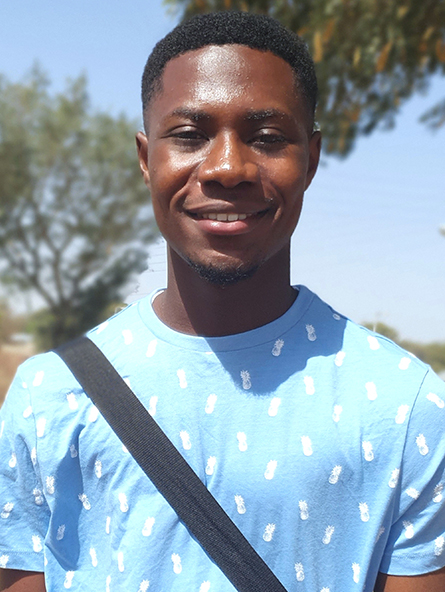 Curious about how things worked, he was inspired as a youngster to study science and medicine. Now 25 years old, he is starting medical school at the University for Development Studies in Tamale, Ghana, the same university where he received his undergraduate degree in biochemistry and engaged in community-based research.

Residents of Tamale commonly drink fresh coconut juice and discard the coconut husks in the street. This generates a lot of waste. In his research, Aminu aimed to recycle those husks into something useful, a material called biochar that could be used for soil remediation or wastewater treatment. Biochar is charcoal produced by decomposing biomass (such as coconut husks) at high temperatures in the absence of oxygen.

Aminu collected coconut husk samples from the streets, brought them back to the lab and transformed them into biochar. Although the COVID-19 pandemic kept him from fully characterizing the properties of his biochar, he is hopeful that other students will continue this work, which is necessary before the biochar can be used to treat soil or wastewater.

In addition to his biochar research, Aminu was involved in other community-based projects as an undergraduate. An important mission of the University for Development Studies is to improve the social and economic lives of rural communities in Northern Ghana, the poorest region in the country. First- and second-year university students spend the third trimester living in one of these communities, identifying and working to solve its problems.

“As part of its curriculum, every student is supposed to do that,” Aminu said, “so I think that’s what makes the university special.”

He was assigned to the remote village of Gwollu in the Upper West Region of the country. For two years, he went to Gwollu, learned what problems the residents faced and reported these back to the university. During his first year, he noticed that the community needed a dam. When he returned the second year, he saw construction work being done on the dam. They also needed a six-unit classroom block, which he later learned was being built.

“We felt very happy that we had been able to impact the community,” he said.

In January 2022, Aminu’s childhood dream of becoming a doctor was about to become a reality — and then university lecturers in Ghana went on strike. The strike lasted for about six weeks,  hampering research, teaching and learning, according to Aminu.

Now that classes have resumed, he finally can begin his medical training. Because medical students also participate in community service projects, he will again be able to help solve problems in communities in need. This time, he hopes to serve in the Northern Region of Ghana, the same region where he attends medical school, and have an impact on the communities closest to him.