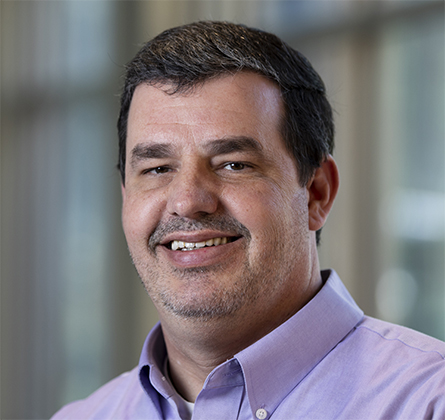 Hart got his start working with proteoglycans, proteins that are heavily decorated with glycans, and has spent the last 37 years studying O-GlcNAcylation, a nutrient- and stress-responsive post-translational modification. Since 2018, he’s been a professor and Georgia Research Alliance eminent scholar at the University of Georgia. 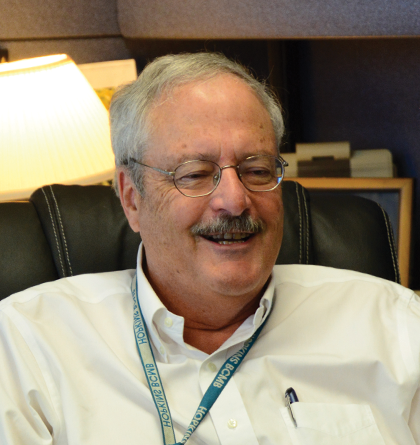 Wells joined Hart’s lab as a postdoc and became an expert in mass spectrometry. He is now a professor and Georgia Research Alliance distinguished investigator at the University of Georgia Complex Carbohydrate Research Center, or CCRC.

ASBMB Today talked to Wells and Hart about glycobiology and their glycoproteomics special issue in Molecular & Cellular Proteomics. The interview has been edited.

GH: Glycobiology is one of the last frontiers in biochemistry, partly due to the complexity and diversity of the molecules. Glycosylation is the most abundant post-translational modification by far. I founded the journal Glycobiology in 1989 and served as editor-in-chief for 12 years. So I've been involved with every aspect of the field for a long time. Mass spectrometry is probably the most important essential tool in analyzing post-translational modifications, particularly glycosylation. I’ve been involved with proteomics as well, or glycomics, as we call it.

LW: I went to Emory University School of Medicine for my Ph.D., for one reason — to work with Keith Wilkinson, who is an expert in ubiquitin biology. But first we had to do rotations. So I went to Judy Fridovich–Keil’s lab, and I just fell in love with the power of genetics. In that lab, we studied galactosemia, the synthesis of sugar nucleotides and how defects can cause congenital disease. I ended up staying in Judy’s lab, and when it came time to do a postdoc, I wanted to take the next step by asking, “What are these sugar nucleotides actually used for?” It hadn’t been that long since Jerry Hart’s lab discovered the O-GlcNAc modification, which seemed like a really cool way for cells to take into account their nutrient status. Jerry took me into his lab, and I stayed for five years and developed a lot of mass spectrometry skills. Then I joined the CCRC, where I’ve been studying O-GlcNAc and other types of glycosylation. I started collaborating with Kevin Campbell, who’s a Howard Hughes investigator  who studies O-mannosylation. (Note: Campbell is also this year’s Herb Tabor Award winner.) Now half my lab does O-mannosylation and half does O-GlcNAc. That’s how I got into it and just kind of fell in love.

How has mass spec evolved in glycoproteomics?

GH: Lance is probably one of the top glyco mass spec people on the planet. He learned his mass spectrometry skills on his own when he was in my lab, where we did liquid chromatography–mass spectrometry, which is very primitive compared to what they have now. Lance basically pioneered the use of mass spec in our lab.

LW: We were on a Paul trap in Jerry’s lab, which at the time was a workhorse, just an amazing instrument. But the amount of data I generated in all my years there could probably be generated in a week today. Certain key technologies have catalyzed progress. We used to do everything by collision-induced dissociation, or CID, which was our only option to dissociate molecules for tandem mass spectrometry. Now we have so many electron dissociation techniques, but what probably doesn’t get enough attention from biologists is the backend software. In this special MCP issue, about a third of the articles are about how to turn the data that’s generated into something we can use in biology.

GH: Probably the most astonishing thing about the development of mass spectrometry in the last decade is the increase in sensitivity and mass accuracy. The very first MALDI (matrix-assisted laser desorption/ionization) instrument I owned was about as accurate as gel filtration. They have gotten much better. The development of the orbitrap was a major breakthrough. 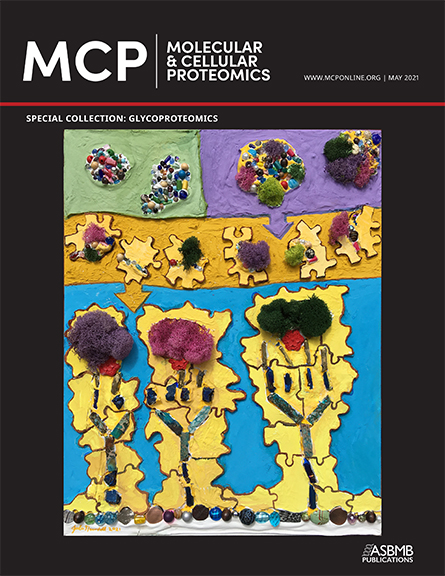 Julie Newdoll/brushwithscience.com
This cover design highlights the MCP special issue on glycoproteomics’ three main
topic areas, from top to bottom. The first is capturing glycoproteins/glycopeptides
(purple background) from the nonglycosylated species (green). The purple arrow
represents introduction into a mass spectrometer for analyses by fragmentation
(yellow). Finally, the area of post-acquisition data analyses (blue) takes the data
generated(yellow arrow) and reassembles the pieces to map sites of modification
and determine site-specific microheterogeneity (mosslike structures) on the protein
backbone(stones at bottom).

LW: Eight years ago, we put together a special issue about glycomics — the characterization of glycans released from proteins. Since then, the field has moved forward fast. Hardware, sensitivity, separations and tools to analyze data have made tremendous progress. So, in this special issue, about one-third of the articles are about enriching for glycoproteins or glycopeptides, one-third are about analyzing them on a mass spectrometer, and one-third are, OK, you’ve generated all this data, how are you going put it back together?

It’s also a good time because of COVID-19. The SARS-CoV-2 spike protein has 66 N-linked glycan sites and a few O-linked sites, and the ACE2 host human receptor, to which the spike protein attaches, is also a heavily N-linked glycosylated protein. And so the collection is very timely in that way.

What are some challenges in the field?

LW: All mass spectrometers, no matter how fancy they are, do the same thing: measure mass over charge. With proteins, 18 of the amino acids have unique molecular weights, with leucine and isoleucine being the exception, but they have a template. With glycans, however, a lot of things weigh the same: GlcNAc and GalNAc, all your hexoses — glucose, mannose, galactose. And that’s what we measure in mass spec. That’s what we call the isomer problem in glycobiology. Some of these gas phase separation techniques offer a lot of promise.

GH: One big challenge of mass spectrometry, particularly with glycobiology, is that if you don’t see something, it doesn’t mean that it’s not there. Also, a protein may have 50 modification sites, but binding for enrichment isn’t always a 1-1 ratio, and it tends to be cell-type dependent. So the level of complexity goes up enormously, and all of that information is biologically important.

What’s the next frontier in glycobiology?

GH: Any glycoprotein, particularly N-linked glycoproteins, may have, as I said, 50 structures at one site and 50 at another, and they’re very cell-type dependent. Where does this heterogeneity come from? If you look at the single cell, is the same level of heterogeneity still there? Or is it dependent on the fact that you have 50 cells and they all have a different Golgi apparatus, and that’s where it’s coming from? The technology is getting close to where we can answer that question.

LW: We’re usually looking at around 5x105 cells, which is pretty good sensitivity — it’s less than a million cells — but what about that heterogeneity? Every one of those cells may be doing something a little bit different.

What advice would you give scientists in training?

GH: Be fearless and follow your data. Never be technique oriented. Be a problem solver. If you have to learn mass spec to answer your question, then learn mass spec. Also, there’s only one reason to be in science, and that’s because you love it. If you don’t love and eat and breathe science, go sell shoes.

LW: I’d say just be bold. The technologies are out there, and the glycobiology community is so open to new people joining, and it’s so supportive. I can contact almost any person that’s published in this special issue and say, “Hey, can you send me your method file?” or “Can you send me those plasmids so I can generate that protein?” And they’re in the mail the next day.