Meet the winner of the 2020/2021 Herbert Tabor Research Award

Kevin Campbell always knew he wanted “a job with no tie,” he said. His daily commute in a hot train to and from Wall Street for a summer college job reinforced that preference. 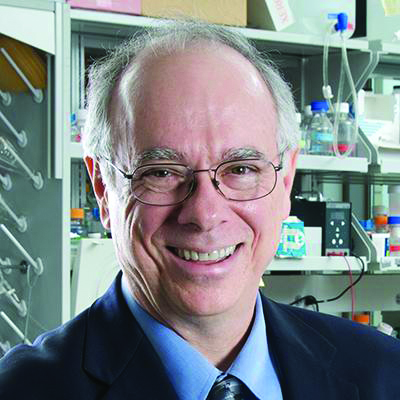 More than four decades later and now a Howard Hughes Medical Institute investigator at the University of Iowa, Campbell might be tieless when he receives the American Society for Biochemistry and Molecular Biology’s 2020/2021 Herbert Tabor Research Award. In a joint nomination letter, Gerald W. Hart and Lance Wells of the University of Georgia called Campbell’s lab “the world leader in the study of the molecular mechanisms of muscular dystrophy.”

Campbell’s group has published more than 450 papers, many on groundbreaking discoveries such as the identification and characterization of dystroglycan as an extracellular matrix receptor involved in anchoring the muscle membrane and cytoskeleton to the basement membrane. He also is dedicated to maintaining the highest standards in training and mentorship for students and postdoctoral fellows in his lab.

After starting his lab in the 1980s, Campbell realized he needed dystrophin mutant tissues to test a hypothesis. He met a physician who routinely operated on patients with Duchenne muscular dystrophy, a genetic disorder involving a dystrophin deficiency. During the operations, tissues were removed and discarded. Campbell started to collect these discarded tissues for experiments that confirmed his hypothesis.

This began a decades-long collaboration with physicians around the world. It was also the conceptual beginning of the Wellstone Muscular Dystrophy Cooperative Research Center, dedicated to diagnosis and development of therapeutic approaches. Campbell is its director.

When high schoolers ask about joining his lab, Campbell encourages them first to try odd jobs and learn to interact with all kinds of people; his high school job at a cemetery and his Wall Street job in college taught him a lot about working with people.

Kevin Campbell’s lab focused on muscle excitation contraction coupling until a failed hypothesis (that dystrophin associated with Ca2+ channel) opened a new research direction. His team purified and later cloned and characterized dystroglycan. They elucidated the molecular pathway involved in dystroglycan maturation and how mutations in dystroglycan processing enzymes therein cause muscular diseases.

The lab studied the functions of two molecules involved in dystroglycan maturation and implicated in muscular dystrophies: LARGE and POMK. They showed that LARGE is a bifunctional glycosyltransferase that synthesizes a matriglycan, a polysaccharide containing a novel O-glycan. They found a mechanism where one disaccharide suffices for high-affinity binding of the extracellular matrix independent of the underlying protein.

POMK previously was thought to be a pseudokinase because its structure lacks several amino acids thought to be essential for a kinase. Campbell’s group in collaboration with Jack Dixon’s lab found that the ER-resident POMK adopts a kinase fold due to formation of disulfide bonds, a finding that has reinvigorated the pseudokinase research field.

Jamey D. Marth wrote in support of the award nomination that such discoveries make Campbell “the most innovative and accomplished biomedical researcher in the field of muscular dystrophy.”