Marina K. Holz, a researcher and dean at New York Medical College, started her scientific career with her eye on cancer for both scientific and personal reasons.

As a Ph.D. student at Harvard Medical School, she studied the serine/threonine kinase mTOR. It regulates cell growth and, when its pathway goes awry, can contribute to tumor progression. At the same time, her mother was undergoing treatment, which ultimately failed, for breast cancer. 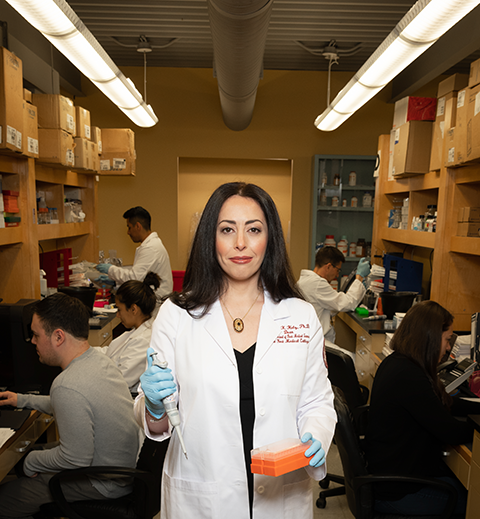 “Her experience created the desire for me to pursue this area of research and to focus on diseases that affect women,” she told NYMC’s annual Chironian Magazine in 2019.

So that’s what she did. Her first faculty position was at Yeshiva University in New York City. There, she built a lab that studied signaling pathways and growth factors in breast cancer.

Within a few years, however, the science led Holz in a new direction. She followed it from a disease that affects many to one that affects very few: the rare disease lymphangioleiomyomatosis, or LAM for short, a metastatic neoplasm that affects the lungs in women of childbearing age.

She has continued her studies of LAM at her new lab at NYMC, where she heads up the Graduate School of Basic Medical Sciences and directs its integrated Ph.D. program.

In observance of Rare Disease Day on Feb. 28, ASBMB Today talked to Holz about her work on therapies for LAM, one of which is being tested on a small number of patients, and with the LAM Foundation, which funds research and advocates for patients.

Q. Tell me a bit about your lab’s work.

A. My lab studies the mechanisms of cell growth and proliferation. We are specifically interested in the mTOR signaling pathway and its crosstalk with estrogen signaling. mTOR is a master regulator of cell growth and thus important for development and progression of several diseases.

Estrogen is a hormone that regulates reproductive functions and is crucial for the development of many diseases, such as breast cancer. We would like to uncover how the two pathways work in concert to regulate gene expression at the level of transcription as well as translation, fine-tuning the cellular responses in homeostasis and disease.

Q. How did you begin to get involved with rare disease research?

A. In the early 2000s, pioneering work of several labs, including John Blenis’, where I was doing my Ph.D., uncovered the connection between mTOR and a rare genetic disease called tuberous sclerosis complex, or TSC. (Editor’s note: Blenis moved from Harvard to Weill Cornell in 2014.)

Mutations in genes TSC1 or TSC2 lead to TSC, which causes benign tumors called hamartomas in many organs as well as central nervous system manifestations, including epilepsy and autism.

Some patients with TSC develop pulmonary lymphangioleiomyomatosis, a rare disease in which TSC1 or TSC2 mutations metastasize, causing cystic lung destruction. Pulmonary LAM is seen in 30% to 40% of adult TSC patients.

However, LAM can also arise sporadically in women with no history of TSC, and sporadic LAM affects women almost exclusively.

What specifically interested me about LAM was the obvious connection to estrogen, since the disease mainly manifests in women of childbearing age and is exacerbated during pregnancy. I felt that my lab could draw on many lessons from our breast cancer work to develop new insights into LAM. 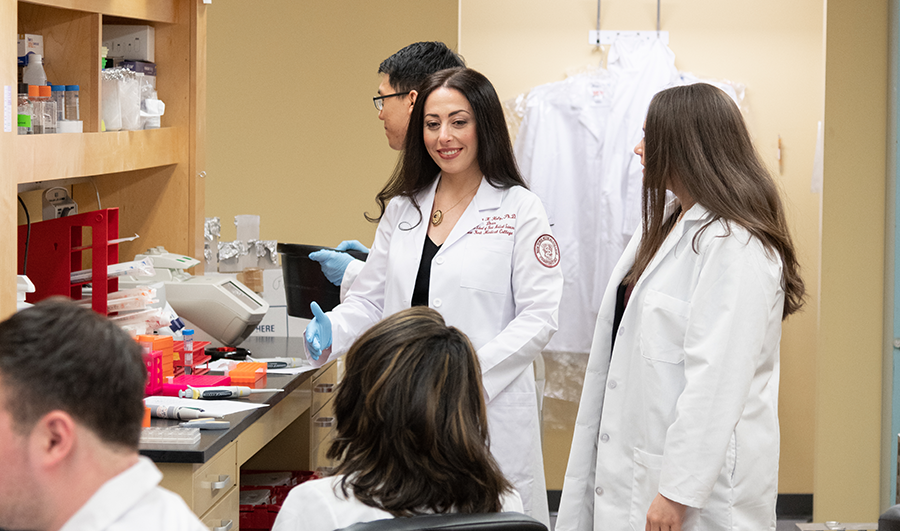 A. The initial symptoms are ambiguous and include shortness of breath and bronchitislike symptoms, fatigue and chest pains, and some women experience pneumothoraxes. There is a progressive decline in lung function.

Many women require oxygen supplementation quite soon, while others do not. The diversity in the disease progression is in itself an area of active investigation. For some, lung transplantation is eventually needed.

The decrease in the quality of life for women, who are usually diagnosed in their 20s to 40s, is devastating. Moreover, patients who require oxygen have to face rude behavior from strangers in public who assume that the harm is self-inflicted because of smoking.

Q. What are their treatment options?

TSC1/2 mutations cause abnormal activation of mTOR. The mTOR inhibitor sirolimus, an analog of the naturally derived agent called rapamycin, is approved by the Food and Drug Administration for the treatment of LAM.

The therapy strikingly stabilizes lung function and improves quality of life. So, while having any rare disease is an enormous health challenge, LAM is exceptional in the rare disease space because of the availability of a life-extending treatment.

Like many drugs, however, it is not without side effects, which include some immunosuppression, mouth sores, gastrointestinal issues, etc., and unfortunately some women either don’t tolerate it well or their disease still progresses while on the drug.

Q. You won a grant from the LAM Foundation in 2013, and that was the start of a long relationship with the organization. How did that play out?

I attended a LAM research symposium — LAMposium — to accept the award, and what was so remarkable about it was the prominent role and the participation of the patients, who were an integral part of the event.

Sitting in sessions with these amazing women, who asked detailed and informed questions about the nitty-gritty of research, talking to them during meals and dancing with them at the gala crystalized for me something that I previously felt only intuitively: how much every experiment and every breakthrough matters to real people who depend on these advances to save their lives.

I went on to join the scientific advisory board of the LAM Foundation, which for the past 25 years has been funding research into LAM as well as engaging in patient advocacy and building a clinical care network in the U.S. and worldwide.

The efforts of the LAM Foundation have led not only to an FDA-approved treatment but also greater awareness of the disease in the medical community, increasing the likelihood that women get proper diagnoses when they present with some of the ambiguous symptoms of LAM. 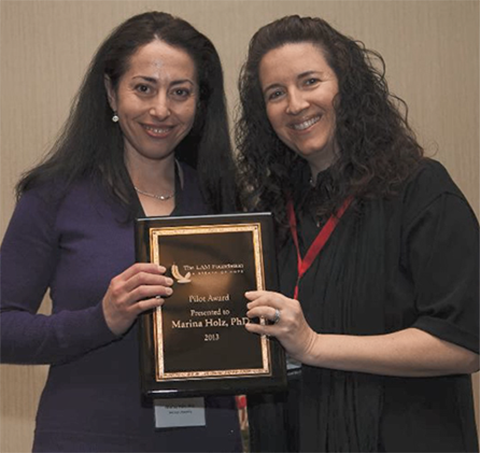 Courtesy of Marina Holz
In 2013, Holz won the LAM Foundation’s Pilot Award to study mTORC1 and S6K1 signaling in LAM and the connections between S6K1 and estrogen in LAM cells. She is shown here at the foundation’s annual conference, known as the LAMposium, with patient and board member Eden Pontz.

Q. The work you began with that one-year pilot grant led to clinical trials of a new combination treatment. Tell us about that.

This trial is led by Dr. Nishant Gupta, my wonderful collaborator at the University of Cincinnati.

It is built on preclinical work from my lab that showed that adding resveratrol, a naturally derived compound, to rapamycin (an mTOR inhibitor used for treatment of LAM), specifically causes death of TSC-deficient cells.

This is a first trial in humans, and it’s still ongoing, but some data should come soon.

Q. How has the COVID-19 pandemic affected your work at NYMC?

A. Like most institutions around the country, NYMC shuttered the research labs in March of 2020. We gradually reopened in May but are working at a slower pace due to our efforts to give space to researchers and reduce the time they have to spend together. I am really grateful to my team, who continue to do research despite the risks.

Q. How has the pandemic affected LAM patients or the foundation’s work?

A. A highly infectious and deadly respiratory disease is a huge concern to patients who already have a lung disease. Some of the precautions like wearing masks are challenging for people who are on oxygen and struggle to breathe.

The LAM Foundation did an amazing job holding virtual educational events for patients as well as research symposia and even an online gala, which allowed it to fund a new slate of researchers for its 2020 grant cycle.

Q. Over the summer, you wrote an article for us about how the pandemic was affecting women in science. It was one of our most-read articles in 2020!

A. I am not a prolific writer, but I felt compelled to speak up, because right from the onset of the pandemic I realized that the setback to women’s careers was enormous and would have effects for years to follow. So I’m glad that this article was read and shared widely.

A. There is still much more to be done in understanding the origins of sporadic LAM, improving the quality of life of LAM patients and developing curative treatments, but hope is on the horizon.

I am also optimistic about the future of science in general. In the past year, we experienced great lows but also amazing highs — several Nobel prizes awarded to women and two vaccines approved for prevention of COVID-19.

Like most scientists, I miss my colleagues and the collaborations that are forged at conferences and breakthroughs that happen in institute hallways. But scientific work must go on, because there are real people who depend on us to deliver the treatments for diseases we know and, as we unfortunately discovered, ones yet to come.