Eleven members of the American Society for Biochemistry and Molecular Biology were named in a list of 100 inspiring black scientists in America put together by the staff of the journal Cell to mark Black History Month.

Squire Booker is a Howard Hughes Medical Institute investigator and Evan Pugh university professor of chemistry at Pennsylvania State University, where he is also an Eberly distinguished chair in science and a professor of biochemistry and molecular biology. Booker’s lab studies the catalytic mechanisms of methyltransferases that depend on the cofactor S-adenosylmethionine. A former chair of the ASBMB’s Minority Affairs Committee, Booker has also co-organized the society’s annual meeting and now serves on the finance committee. He is also a steering committee member for the Annual Biomedical Research Conference for Minority Students.

Russell DeBose–Boyd is a professor of molecular genetics and the Beatrice and Miguel Elias distinguished chair in biomedical science at the University of Texas Southwestern Medical Center at Dallas. Debose–Boyd’s lab studies HMG-CoA reductase, the rate-limiting enzyme in cholesterol synthesis. In addition to serving as an associate editor of the Journal of Lipid Research and an editorial board member for the Journal of Biological Chemistry, Debose–Boyd is a member of the ASBMB finance committee. Get to know him in this profile, where he offers advice for scientists in training: “The work in the lab is very important, but equally important is your life outside the lab.”

Breann Brown is an assistant professor of biochemistry at Vanderbilt University. Brown’s research focuses on the assembly of mitochondrial protein complexes that control heme biosynthesis and mitochondrial genome replication. She is a member of the first class of early-career reviewers for the Journal of Biological Chemistry.

Namandje Bumpus is an associate professor of medicine in the clinical pharmacology division at Johns Hopkins University School of Medicine. Bumpus studies drug metabolism by the cytochrome p450 family of enzymes, with particular interest in drug-induced acute liver failure caused by certain antiviral drugs. She also serves as the associate dean for basic research at Hopkins.

Craig Cameron is the Jeffrey Houpt distinguished investigator, a professor and chair of the microbiology and immunology department at the University of North Carolina at Chapel Hill School of Medicine. Cameron also serves as an associate editor of the Journal of Biological Chemistry. His lab studies RNA viruses, a diverse family including pathogens from poliovirus to coronavirus, as well as mitochondrial gene expression. Read about Cameron in his own words in this Q&A.

Rotonya Carr is an assistant professor of medicine at the Hospital of the University of Pennsylvania. In the clinic, Carr specializes in management of fatty liver diseases. Her lab focuses on how hepatic metabolism can go awry to promote liver disease. She also serves as a junior associate editor of the Journal of Lipid Research; read more about that work here.

Tracy Johnson is a Howard Hughes Medical Institute investigator and the Maria Rowena Ross chair of the department of cell biology and biochemistry at the University of California, Los Angeles, where she is also co-appointed to the molecular, cell and developmental biology department. Johnson’s lab studies the mechanisms of co-transcriptional pre-mRNA splicing in yeast. Johnson is also invested in education; she leads UCLA’s HHMI Pathways to Success Program, which offers an early opportunity for undergraduate summer research and extensive mentoring.

Melanie McReynolds is a Howard Hughes Medical Institute Hanna Gray fellow and Burroughs Wellcome Fund Postdoctoral Enrichment Program fellow. McReynolds is a postdoc at Princeton University, working with Joshua Rabinowitz. In this profile, McReynolds discusses her path to graduate school and her research into metabolic flux and aging.

Beronda Montgomery is an MSU Foundation professor cross-appointed in the biochemistry and molecular biology, microbiology, and molecular genetics departments at Michigan State University. In addition to her scholarship on effective mentoring for research, Montgomery leads a lab that studies the synthesis of biliproteins, pigmented proteins that sense light and regulate plant growth and development. She is an editorial board member for the Journal of Biological Chemistry and a member of the ASBMB Today editorial advisory board. She has written extensively about diversity, equity and inclusion for ASBMB Today.

Sharifa Love Rutledge is an assistant professor of chemistry at the University of Alabama in Huntsville. Her lab studies the molecular mechanisms early in the dysfunction of insulin-secreting pancreatic beta cells, which occurs early in diabetes.

Gustavo Silva is an assistant professor of biology at Duke University. His lab studies how the ubiquitin-proteasome system, involved in marking proteins for degradation and subsequently breaking them down, responds to oxidative and other stresses. Silva, who serves on the ASBMB’s Minority Affairs Committee, reflected on his path to professorship in this Q&A in ASBMB Today.

The 10th annual Emerging Researchers National Conference in STEM took place in February in Washington, D.C. The conference, hosted by the American Association for the Advancement of Science’s Diversity, Equity and Inclusion programs and the National Science Foundation Division of Human Resource Development, aims to connect undergraduate and graduate student researchers from underrepresented groups and institutions with opportunities and career preparation. It is also an opportunity — for many students, their first — to present their research to peers and professors.

Stephen Gonzalez, a student at California State University, Fullerton, said, “One of the conversations that really stuck with me was with one of my poster judges … we got into a great talk about my research. I cherished his time there, since he really made me grow more scientifically and as a presenter.” 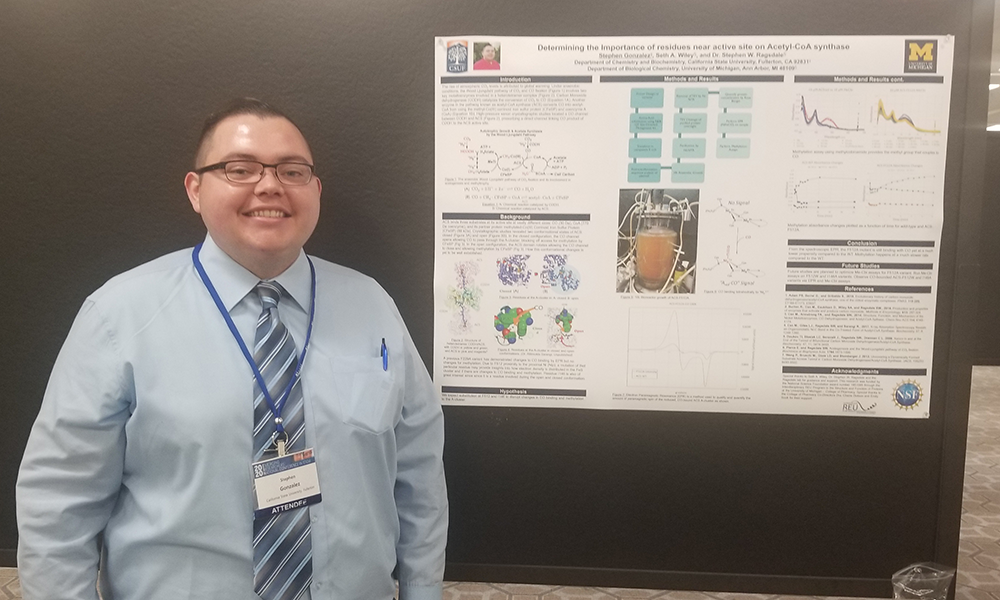 Courtesy of Stephen Gonzalez
Stephen Gonzalez, an undergraduate at California State University, Fullerton presents his poster, “Determining the Importance of Residues Near the Active Site on Acetyl-CoA Synthase in Moorella Thermoacetica” at the Emerging Researchers National Conference in STEM.

Among this year’s presenters were nine undergraduate and graduate student members of the American Society for Biochemistry and Molecular Biology, along with three faculty members.

Harold W. Gardner, a biochemical researcher and environmental activist who lived most recently in Carlisle, Pa., died Nov 6. He was 84. 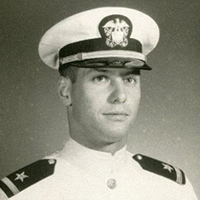 After service as a U.S. Navy courier, Gardner earned a Ph.D. in biochemistry at Pennsylvania State University. He worked as a researcher at the Pineapple Research Institute in Honolulu, at the University of California, Los Angeles and at the Agricultural Research Service (an agency of the U.S. Department of Agriculture) in Peoria, Ill. His focuses included lipid chemistry, enzymology, free radical chemistry, fungal products and plant ecology. He published more than 120 papers and was an associate editor for the journal Lipids.

Gardner worked with the Sierra Club on projects to preserve water quality in the Illinois and Mississippi rivers.  After his retirement, he focused on tallgrass prairie restoration in Illinois, writing a book and numerous papers on native plants. He later owned a 70-acre nature preserve in Pennsylvania and advised the Penn State Arboretum on its prairie project.

Ervin G. Erdös, who survived a German concentration camp to become a distinguished professor and medical researcher in the U.S., died Nov. 17 at the age of 97. 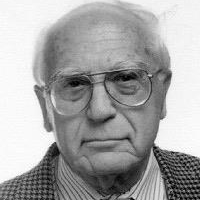 Erdös was born into a Jewish family in 1922 in Budapest, where his father worked as an engineer until Hungary joined the Axis nations after Hitler’s rise to power. He was conscripted to a forced labor brigade and, after Germany invaded Hungary in 1944, he and his father were sent to the Sachsenhausen concentration camp in Germany where they witnessed many atrocities.

After the camp was liberated, Erdös returned to Budapest and enrolled in medical school. In 1950, he fled the communist regime and completed his medical degree in Munich. He then worked in a German laboratory, where he began studying how enzymes and peptides aid in the control of blood pressure.

Erdös was recognized for his work on angiotensin I converting enzyme, or ACE. He discovered that ACE exerted a dual effect on blood pressure by controlling two oppositely acting peptides.

He is survived by his wife, Sara Rabito; sons Peter and Philip and their wives; and four granddaughters. He was preceded in death by his son, Martin Erdös.

Read “An exploration of bioactive peptides: My collaboration with Ervin G. Erdös,” a Journal of Biological Chemistry Reflection by Rajko Igic.