In the spring of 2020, the U.S. experienced severe shortages of COVID-19 tests, and a frustrated public wondered why testing kits were so hard to produce. Georgia Tech scientists took action, developing protocols that can be used by laboratories to make COVID-19 test kits in many settings and with many budgets.

Loren Williams, a professor of chemistry and biochemistry, spearheaded the effort, shifting his lab's focus from the origins of life to COVID-19 test kit production. "Like many academic scientists, we had useful expertise and resources and an intense desire to contribute," Williams said.

Seeing that reagents for RT-PCR kits were in short supply, Williams gathered a team to design a protocol for academic labs to produce kits cheaply. "Once we launched, we were nearly swamped by volunteers with all kinds of amazing skill sets," he said.

The team grew to more than 30 scientists from diverse backgrounds, including undergraduate and graduate students, postdoctoral fellows, laboratory technicians, and professors. Social distancing rules made it difficult to train recruits, but the researchers managed, sometimes using video calls to demonstrate how to use instruments or perform techniques.

The project culminated in a paper published in the Journal of Biological Chemistry that provides step-by-step instructions for academic labs to produce COVID-19 test kits. Samantha Mascuch, a postdoc studying chemical ecology, and Sara Fahkretaha–Aval, a fifth-year grad student studying the origins of life, are co–first authors of the paper. Mascuch said working on coronavirus was not only an honor but an ethical imperative. "We're scientists," she said. "Certainly public money has gone into training us, and I think it's important for us to use what skills we have to give back."

The protocol reduces costs so that even labs with small budgets can contribute. In RT-PCR tests, pieces of the viral genome are recognized with molecular probes and amplified by an enzyme. The new protocol instructs scientists how to make the molecular probes and enzymes in-house instead of having to buy them, drastically cutting costs. 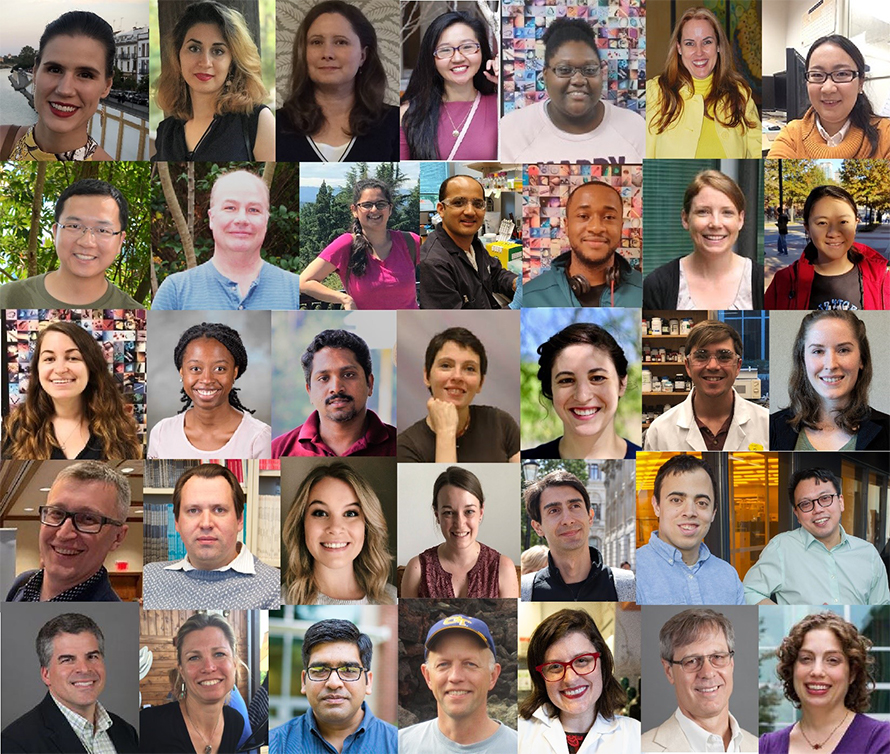 The molecular probes that bind and recognize the COVID-19 genome are short fluorescent pieces of DNA. DNA is composed of nucleotides called adenine, guanine, thymine and cytosine, known as A, G, T and C. The researchers made a chain of these nucleotides that binds a part of the viral genome through complementary base pairing, in which A's bind to T's and G's bind to C's. Finally, they added fluorescent tags to the end of these DNA pieces so that when the viral genome is recognized and amplified by an enzyme, it can be detected by looking at the fluorescence signal.

The scientists also made the protein DNA polymerase (the enzyme that amplifies the pieces of the viral genome) by feeding bacteria the DNA instructions for making that protein. The bacteria act as little factories, turning the DNA into a functional enzyme that is purified and used in the COVID-19 test kit. The team at Georgia Tech tried many types of molecular probes and DNA polymerases before they found the most accurate and efficient combination.

Beyond being involved in exemplary scientific research, Fahkretaha–Aval is proud to have made a global resource. "We wanted to do something for the whole world," she said. "The U.S. didn't have enough test kits, which made me think about other, poorer countries with bad economies. Or countries like my own, Iran, that are under sanction or embargo."

To determine if the kits could detect SARS CoV-2, the virus that causes COVID-19, on surfaces, a subgroup of researchers took samples around the Georgia Tech campus at stores, gas stations and even other labs. After the paper was published, collaborators at the University of Georgia tested the kit's ability to detect the virus in patient samples. By every metric tested, the homemade kits work as well as, if not better than, commercially available kits.

Academic labs need an emergency use authorization, or EUA, to produce kits that can be distributed to local testing centers; the Food and Drug Administration requires data showing the quality and efficacy of the kits. Labs can produce test kits that meet these standards more easily by following the Georgia Tech protocol.

This protocol also arms communities worldwide to respond to future shortages. Fahkretaha–Aval believes more labs need to make resources for combatting COVID-19 publicly available. "I hope they share the information like we did," she said. "I hope that all of the scientists and companies share their information after they produce new tests, treatments, and vaccines."

From the journals: JBC
Isabel Casas
How an oral antiviral drug confuses the replication machinery of SARS-CoV-2
Gillian Rutherford
The COVID-19 vaccine race heats up
Guananí Gómez–Van Cortright
A mechanism for remdesivir activity and a platform to test other antivirals
Laurel Oldach
The fate of genes during differentiation
Brian O'Flynn
Researchers link sugar-studded protein to Alzheimer’s
Rachel Butch