Researchers at Fox Chase Cancer Center have discovered a potential new target in the treatment of endometrial carcinoma' The research was published recently in Molecular & Cellular Proteomics.

Using multiplexed inhibitor beads and mass spectrometry, James S. Duncan, associate professor in the cancer biology research program at Fox Chase, and colleagues profiled the kinome of endometrial tumors and normal endometrial tissues and identified a network of kinases that were overexpressed, including serine/arginine-rich splicing factor kinase 1, or SRPK1.

According to Duncan, endometrial tumors frequently have alterations in protein kinases, a family of about 535 enzymes collectively termed the kinome. Kinases are altered in about one-quarter of all cancers and are considered highly susceptible to treatment with drugs because of their catalytic activity. However, only a small fraction of the kinome has been explored therapeutically.

Multiplexed inhibitor beads and mass spectrometry is a chemical proteomic strategy that allows researchers to simultaneously look at kinase levels in cells and tumors.

The analysis showed that SRPK1 was overexpressed in endometrial cancer tissues and that this overexpression was associated with poor survival, suggesting that SRPK1 could be involved in key tumor-associated properties, Duncan said.

"We also discovered that in combination with therapy targeting growth factors—in this case EGFR—targeting this kinase produced strong drug synergy to kill these tumors," Duncan said. This synergy was found for endometrioid cell lines and uterine serous cancer cell lines, a disease subtype with poor outcomes.

To further explore the role of SRPK1, Duncan and colleagues want to apply proteomic technology to try to understand more about how SRPK1 works and conduct experiments to see if EGFR and SRPK1 inhibition has an effect on endometrial cancer tumor models.

"This project really sums up the concept of a lot of the work that Fox Chase is trying to do when it comes to research," Duncan said. "Peggy's Pathway selected our project for funding because they thought our approach of looking at kinase signaling looked interesting, and, as a result, we have found something that may be actionable."

Peggy's Pathway for Women's Cancer Care is a charity started in honor of Peggy Pettinato, who passed away from serous endometrial carcinoma. The organization's mission is to raise funds for research into innovative treatments and early detection of endometrial cancer, the most common gynecologic malignancy in the United States. 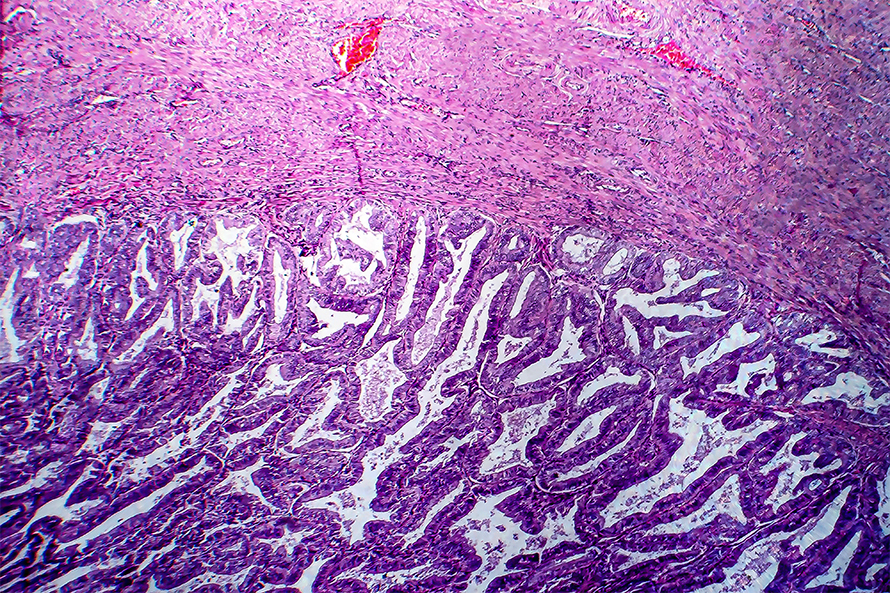 Light micrograph of an endometrial adenocarcinoma.