A second pathway into cells for SARS-CoV-2

New understanding of the neuropilin-1 protein could speed vaccine research 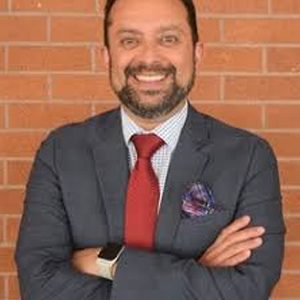 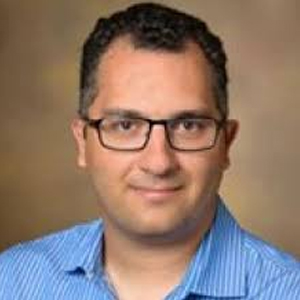 When it comes to how the coronavirus invades a cell, it takes three to tango. The dance began with the ACE2 receptor, a protein on human cells that allows SARS-CoV-2, the virus that causes COVID-19, to enter and infect the cell. But now enter a new dance partner – another protein – that is present on human cells. This tango of three proteins – two human and one viral – enhances the ability of SARS-CoV-2 to enter human cells, replicate and cause disease. 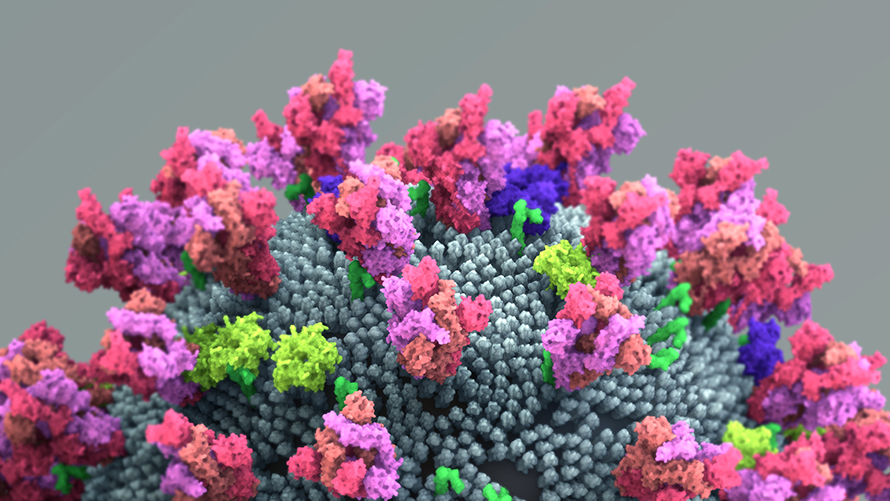 COVID-19 has crippled health care systems and economies worldwide. Extraordinary efforts are underway to develop vaccines and other therapies to combat this virus. But for these efforts to succeed, understanding how the virus enters cells is critical. To that end, in two papers published in Science, two teams independently discovered that a protein called the neuropilin-1 receptor is an alternative doorway for SARS-CoV-2 to enter and infect human cells. This is a major breakthrough and a surprise, because scientists thought neuropilin-1 played roles in helping neurons make the correct connections and aiding the growth of blood vessels. Before this new research, no one suspected that neuropilin-1 could be a door for SARS-CoV-2 to enter the nervous system.

My colleagues and I were particularly intrigued by these reports because as neuroscientists who study how pain signals are triggered and transmitted to the brain, we were also probing the activity of neuropilin-1. In a recent paper our team showed how neuropilin-1 is involved with pain signals and how, when the SARS-CoV-2 virus attaches to it, it blocks pain transmission and relieves pain. The new work shows that neuropilin-1 is an independent doorway for the COVID-19 virus to infect cells. This discovery provides insights that may reveal ways to block the virus.

Neuropilin-1 helps SARS-CoV-2 get in 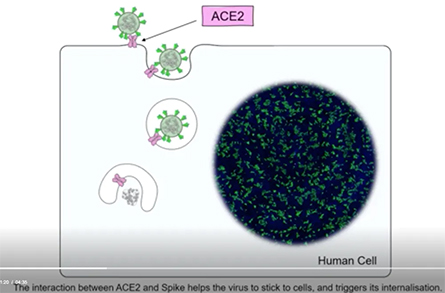 The University of Bristol, CC BY-ND
In this image the box represents a human call and the green object is SARS-CoV-2. The Spike protein on the COVID-19 virus attaches to the ACE2 protein receptor (pink) and infects human cells. 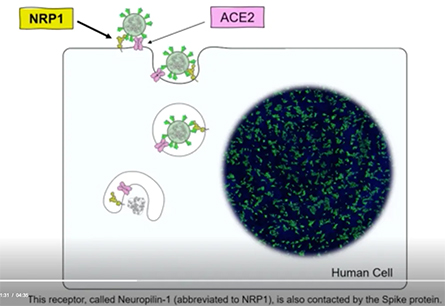 The University of Bristol, CC BY-ND
The Spike protein on the COVID-19 virus attaches to both the ACE2 (pink) and the neuropilin-1 (yellow) preceptor proteins, which are present on the same human cell. 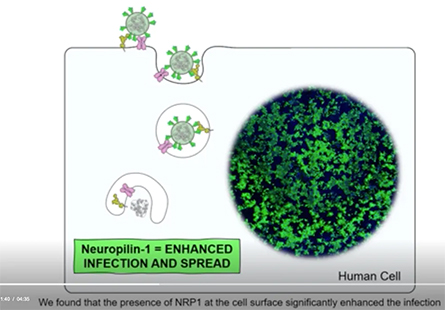 The University of Bristol, CC BY-ND
When the Spike protein on the COVID-19 virus (green) attaches to both the ACE2 (pink) and the neuropilin-1 (yellow) proteins on the same human cell, the virus is able to infect many more cells.

A protein called Spike that sits on the outer surface of SARS-CoV-2 allows this virus to attach to protein receptors of human cells. Recognizing that a tiny piece of Spike was similar to regions of human protein sequences known to bind to neuropilin receptors, both research teams realized that neuropilin-1 may be critical for infecting cells.

Using a technique called X-ray crystallography, which allows researchers to see the three-dimensional structure of the Spike protein at a resolution of individual atoms, as well as other biochemical approaches, James L. Daly of the University of Bristol and colleagues showed that this short sequence from Spike attached to neuropilin-1.

In experiments in the lab, the SARS-CoV-2 virus was able to infect fewer human cells that lacked neuropilin-1.

In cells with both the ACE2 and neuropilin-1 proteins, SARS-CoV-2 infection was greater compared to cells with either “doorway” alone.

Daly and colleagues showed that SARS-CoV-2 was able to infect fewer cells if they used a small molecule called EG00229 or antibodies to block the Spike protein’s access to neuropilin-1.

Using similar methods, a team led by German and Finnish researchers came to the same conclusions as the first study. Specifically, this team showed that neuropilin-1 was critical for the SARS-CoV-2 virus to enter and infect cells.

By using an antibody to block one region of the neuropilin-1 receptor protein, the researchers showed that SARS-CoV-2 harvested from COVID-19 patients could not infect cells.

In another experiment, Ludovico Cantuti-Castelvetri of the Technical University Munich and colleagues attached silver particles to synthetic Spike proteins made in the lab and found that these particles were able to enter cells that carried neuropilin-1 on their surfaces. When they did the same experiments in live mice, they found that the silver particles entered cells lining the nose. The researchers were surprised to discover the Spike protein could also enter neurons and blood vessels within the brain.

Using tissues from human autopsies, Cantuti-Castelvetri and colleagues noted that neuropilin-1 was present in the cells lining the human respiratory and nasal passages, while the ACE2 protein was not. This demonstrates that neuropilin-1 provides an independent doorway for the COVID-19 virus to infect the cells.

THE UNIVERSITY OF BRISTOL.
This shows how neuropilin-1 allows SARS-CoV-2 to infect cells.

Moreover, cells lining the nasal passages from COVID-19 patients that were positive for neuropilin-1 were also positive for the Spike protein. These findings confirmed that Spike uses the neuropilin-1 protein to infect human cells in regions of the body where ACE2 isn’t present.

In a surprising discovery recently reported by our lab, we found that the SARS-CoV-2 Spike protein has a pain-relieving effect. Even more surprising was the finding that this analgesia involved the neuropilin 1 receptor.

We demonstrated that Spike prevented a protein from binding to neuropilin-1, which blocked pain signals and brought pain relief. That is because when this protein, called Vascular Endothelial Growth Factor A (VEGF-A) – which is produced by many cells in the body – binds to neuropilin-1 under normal circumstances, it initiates the process of pain signaling by exciting neurons that convey pain messages.

So, the virus revealed to us a potential new target – the neuropilin-1 receptor – for managing chronic pain. Now if we can decipher how neuropilin-1 contributes to pain signaling, then we be able to target it to design ways to block pain.

In our lab, we are now taking advantage of how Spike engages neuropilin-1 to design new pain inhibitors. In this report on the preprint server BioRxiv, we have identified a series of novel compounds that bind to neuropilin-1 in a manner that mimics Spike. These molecules have the potential to interfere with neuropilin-1 function including SARS-CoV-2 virus entry, and block pain signals and even cancer growth. 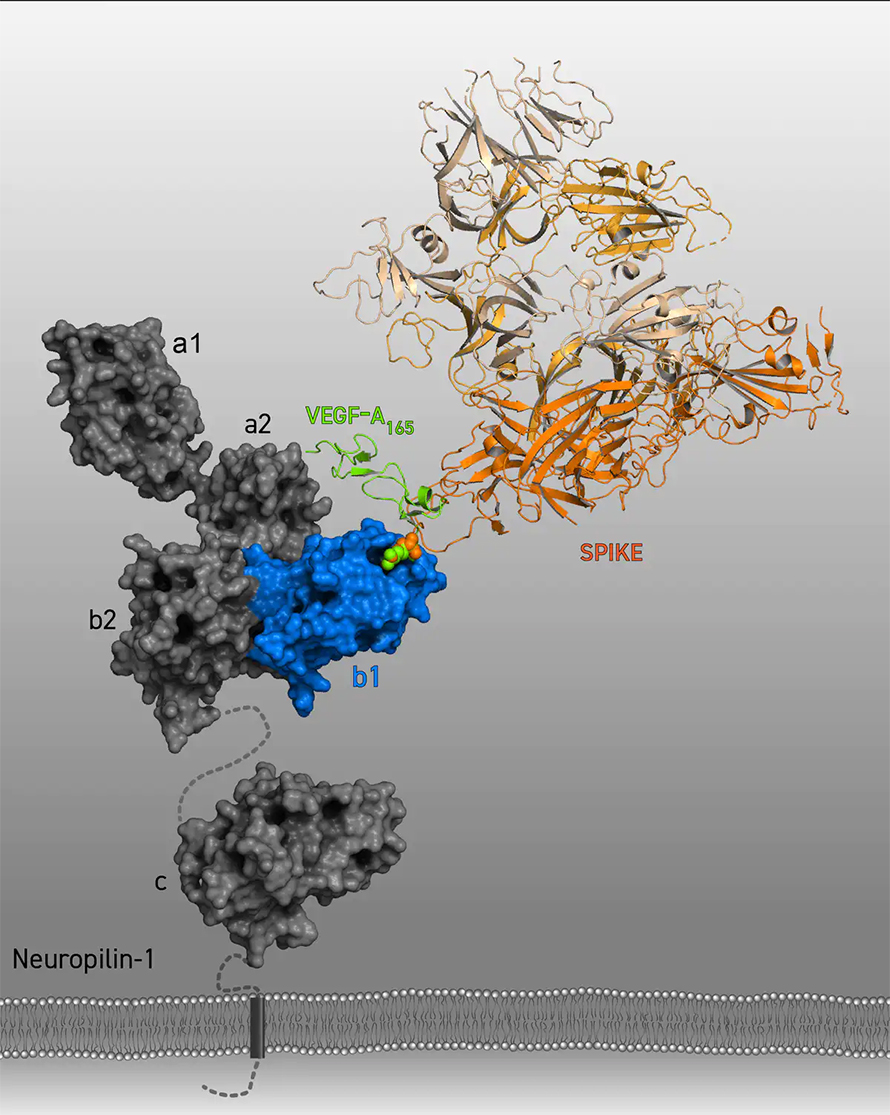 The studies by Daly and colleagues and Cantuti-Castelvetri and colleagues shift our collective focus onto neuropilin-1 as a potential new target for COVID-19 therapies.

These studies also have implications for the development of vaccines against the Spike protein. Perhaps the most important implication is that the neuropilin-1 binding region of Spike should be targeted for COVID-19 prevention. Because a number of other human viruses, including Ebola, HIV-1 and highly virulent strains of avian influenza, also share this signature sequence of Spike, neuropilin-1 may be a promiscuous mediator of viral entry.

But it appears that the tango is not over yet. More dance partners have emerged. PIKFyve kinase and CD147 – two proteins – have also been shown to bind Spike and facilitate viral entry. Whether these new partners take center stage or play second fiddle to ACE2 and neuropilin-1 remains to be seen.

Rajesh Khanna is a professor of pharmacology at the University of Arizona.

Aubin Moutal is a research assistant professor of pharmacology, University of Arizona.