In June 2019, a botanist cut a handful of dark, shiny leaves from a slender understory tree in the rainforest of northeastern Australia. Some 2,700 miles away, on another coast of the continent, a team of molecular biologists had uncovered a forgotten history of the tree’s biochemistry, and they wanted to learn more from its leaves. Their findings recently were published in the Journal of Biological Chemistry. 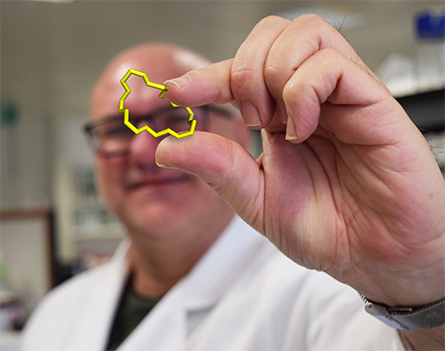 Courtesy of Josh Mylne
Mark Fisher poses for a photo illustration with the structure of evolidine.

Mark Fisher, a graduate student at the University of Western Australia in Perth, studies the synthesis of cyclic peptides, which are cut from longer proteins and joined end-to-end to make a ring structure. While writing his dissertation, Fisher came across an obscure paper from the 1950s that described a cyclic peptide before cyclic peptides were known to have been discovered in plants.

The 1955 article in the Australian Journal of Chemistry described a chemical isolated from a native tree called Melicope xanthoxyloides, or yellow evodia, and its chemistry only made sense if it was a peptide with no N or C terminus. In the spare style of their time, the authors didn’t discuss what the compound’s existence might mean or how it might be made. Still, they demonstrated that it was cyclic — a first for plants back when scientists were first working out the rules of protein and peptide synthesis — and dubbed it evolidine.

The journal was small, new and relatively unknown. Over time, researchers remembered the molecule, vaguely, but its place in history was forgotten. Intrigued, Fisher traced a chain of modern references. “Papers stated with more and more certainty over the years that cyclolinopeptide A (from flax) was the first such peptide discovered,” he said.

Fisher’s advisor, Joshua Mylne, has studied cyclic peptide biosynthesis for over a decade, lately as a sideline to more applied research on herbicides. He recalls a slide set Fisher put together for a talk tracing the slow distortion.

“(As) he clicked his way through the papers … there was no maliciousness, no, ‘Screw those Aussie guys, we’re gonna start calling this the first one,’” Mylne said. Still, the effect was the same: Evolidine’s early discovery was forgotten.

With a certain national pride, Mylne set out to reestablish evolidine’s reputation as the first of the plant cyclic peptides. Fisher stayed on as a postdoc because he was intrigued. 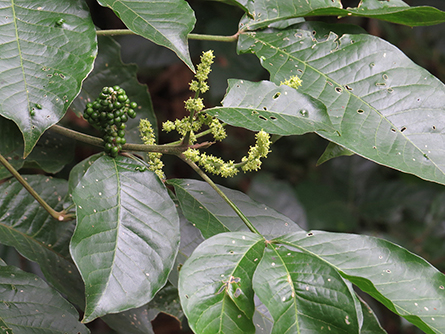 Kerry Coleman / iNaturalist Australia
Yellow evodia, or melicope xanthoxyloides, is differentiated from related species most easily when it’s in flower.

Evodiadoesn’t grow in Perth, so Mylne recruited researchers at the Australian Tropical Herbarium in Cairns, Queensland, to obtain it.

When it’s not in flower, yellow evodia is hard to distinguish from closely related trees. The first time botanist Fanie Venter returned to the herbarium from a collecting expedition, it became clear that the leaves he had brought back were from another species.

“It probably contained some kind of evolidine, but we wanted the (yellow evodia) evolidine,” Mylne said.

Once they had the right samples in hand, Mylne and Fisher generated a leaf transcriptome and ran protein extracts through a mass spectrometer, searching for the cyclic peptide described decades before as a seven–amino-acid compound. They found it, along with six newly described peptides that are similar in sequence.

The team studies cyclic peptide synthesis to understand protein evolution. To learn which gene product makes evolidine, they needed to determine the sequence of the longer protein it was cut from, so they searched the leaf transcriptome for mRNAs that might match the collection of seven–amino-acid sequences.

“It is very hard to search a transcriptome for such a short sequence, as you usually get many matches,” Fisher said. “This case was no exception.” He found the relevant transcripts eventually by searching for homology to a citrus cyclic peptide precursor.

Most known cyclic peptides are made by enzymes called transpeptidases, which behave like a slightly confused protease. Ordinarily, proteases break the bond between two amino acids — one vertebra in the backbone of a protein — by bringing in a water molecule that acts as a nucleophile, shouldering its way into a bond with a backbone carbon in a process called peptide hydrolysis. If the amino terminus of the substrate’s protein backbone is close enough to slip into the protein’s active site, then instead of breaking the peptide bond with water, a transpeptidase may break the peptide bond using an amino-terminal nitrogen instead — yielding one truncated protein and one small cyclic peptide.

Like many enzymes, transpeptidases are picky about their substrates, each enzyme preferring a known substrate-recognition sequence. The team found that, oddly, the precursor proteins for evolidine and its relatives don’t have any of those recognition sites. That suggests the evolidine family might be made by a yet-undiscovered transpeptidase or by another undescribed molecular mechanism.

It is unclear what knowing about evolidine might mean for future researchers. Often, scientists look to natural products in search of antimicrobial activity; although previous researchers had reported that evolidine could kill some bacteria, the team was unable to reproduce that result, and they suspect that the earlier researchers’ peptide preparation may have had some impurities. It may be, Mylne said, that evolidine is the evolutionary equivalent of a human tailbone, a vestige that neither harms the plant nor does it much good. However, it is likely to shed light both on the tree’s history and on the curious evolution of the scientific literature. 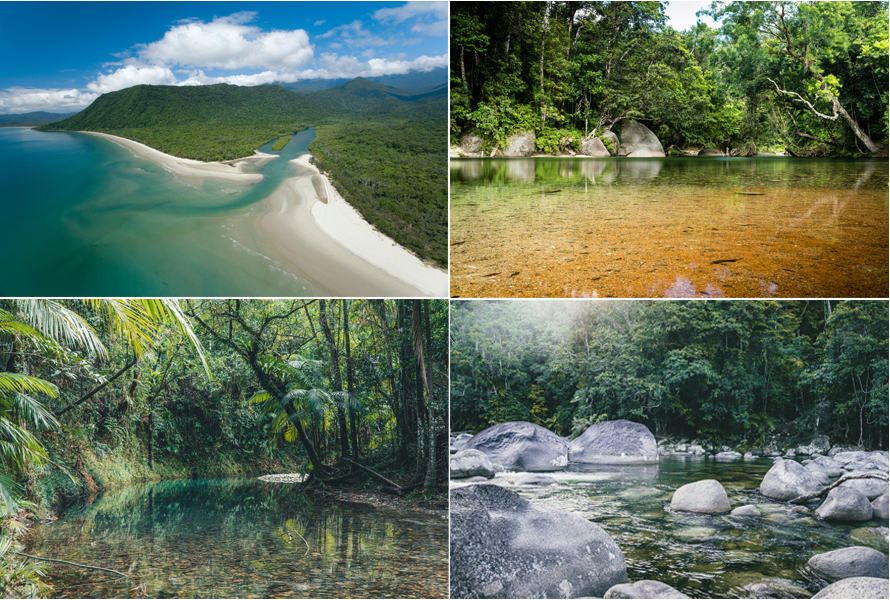