When brown fat was discovered in human adults, it came as a surprise.

The tissue showed up as an annoying background in positron emission tomography scans, which use a radiolabeled glucose tracer to detect metabolic activity, often to ferret out metastatic cancer cells. Around the neck and shoulders, and sometimes in pockets surrounding the heart, kidneys and spine, there was a persistent signal of high metabolic activity too symmetrical to be cancerous.

“The radiologists were most interested in getting rid of the signal so as to better see metastases,” said Natasa Petrovic, a research scientist in molecular biosciences at the Wenner-Gren Institute in Stockholm. But when the observation made its way into the metabolism literature, it was an exciting finding. It meant that adult humans possessed brown adipocytes, which researchers had thought were found only in newborns.

Most fat cells, or adipocytes, are white, with cytoplasm almost completely occupied by a lipid droplet filled with triglycerides, which stores energy. In contrast, brown adipocytes are rich with mitochondria and much smaller lipid droplets. They warm the body without shivering by directly converting food energy into heat. This high metabolic activity caused them to appear in PET scans.

Because unwanted fat gain is a widespread health concern, finding brown adipocytes in human adults led researchers to ask whether they could make more of them. Brown and white adipocytes come from distinct cell lineages; either type of tissue isolated from a mouse and grown in culture generates distinct offspring cells, indicating that both phenotypes are cell autonomous. White fat cells long have been known to descend from fibroblasts. In 2007, researchers including Petrovic reported that brown adipocytes share an origin with muscle cells.

These distinct lineages left out one very interesting group of cells. In animals exposed to cold or stress, metabolically active adipocytes expressing some signature brown-cell proteins proliferated in their white adipose tissue. How did these brownlike cells arise? Did they descend from myogenic precursors that had been lurking in white adipose depots, or were they converted from white adipocytes? Either way, could researchers reverse unwanted weight gain by finding a way to convert white adipocytes to brown?

In a Journal of Biological Chemistry paper published in 2010, Petrovic and colleagues offered an answer, reporting that these cells had their origin in white adipose tissue but had a phenotype distinct from both white and brown adipose cells. They were a new type of cell.

Petrovic started on the project by accident, trying to coax white adipocyte progenitor cells in culture to mature more completely.

“PPAR gamma is a central regulator of adipogenesis,” Petrovic said. Therefore, it surprised her that when she treated preadipocytes with a PPAR gamma agonist, the stimulation also yielded a subset of cells that shared features with brown adipocytes.

The cells expressed a key signature of brown adipocytes, mitochondrial uncoupling protein 1, or UCP1. This transmembrane protein lets protons flow from the mitochondrial intermembrane space back into the matrix, generating heat instead of ATP. After norepinephrine treatment mimicking cold stress, the cells also contained more mitochondria and expressed more PGC1 alpha, which links stimulation of PPAR gamma to mitochondrial biogenesis.

The brownlike cells in white cell culture recalled the question about the developmental origin of brown cells in white depots. Petrovic and colleagues just had established that brown and white fat cells are from different precursors. How were they both showing up in her culture? 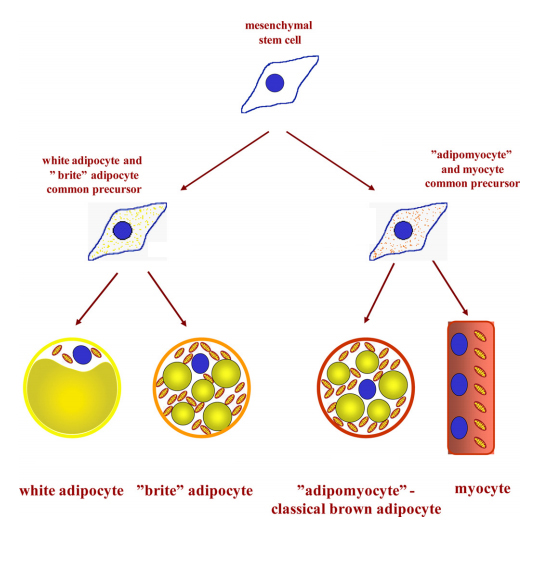 To exclude the possibility that stray brown preadipocytes might be mixed into the starting culture and growing faster than the white adipocytes, she generated hybrid cultures, mixing UCP1-knockout brown preadipocytes with wild-type white preadipocytes at varying ratios. No matter the starting ratio, there was proportional stimulation of the knockout-specific noncoding transcript from brown cells and the wild-type transcript from white cells, suggesting that the brown and white cells were stimulated to the same degree. This meant, the team concluded, that browning “cannot be explained by the overgrowth of a few pre-existing brown adipocytes in these cultures.”

But what should they be called?

“I remember very clearly our numerous and long discussions attempting to coin the most appropriate and catchy name for the novel cell type — one of my suggestions was ‘brownies,’” Petrovic said. She cannot recall whose idea it was, but the lab settled on the name brite, short for brownlike-in-white. After an unrelated study called the same tissue type beige for its mixture of brown and white characteristics, that name also stuck.

Later research found that brite/beige adipocytes exist in humans as well as mice and showed that, like classical brown adipocytes, brite cells can contribute modestly to an organism’s heat production. Researchers also have found that white adipocytes’ browning competence decreases with age.

Ten years on, Petrovic said, the field still is trying to understand the heterogeneity of fat tissues. “Adipocytes are so far classified as white, brown, and beige/brite,” she said. “However, I would say that this classification is an oversimplification of the real situation.”

Petrovic has continued to study the brown–brite distinction in mice, unraveling the functions of specific genes expressed in both types of thermogenesis-competent cells to understand their differences.

Meanwhile, other researchers continue to search for pharmaceutical approaches to stimulate white-to-brite conversion in humans as a potential way to tackle obesity.